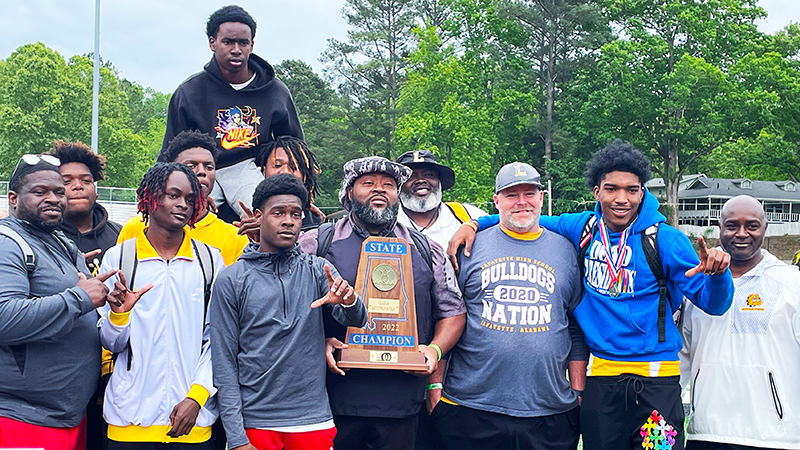 Running this state: LaFayette Bulldogs track coach Corey Thornton (center) is surrounded by coaches and the boys track team as he holds a new piece of hardware that will be on display inside LaFayette High School. Photo contributed.

On Saturday, May 7, the LaFayette High School boys track and field team made history in capturing the AHSAA Class 2A State Track and Field Championship at Oliver Woodard Stadium in Cullman. The team celebrated its second-ever boys track and field state title captured at LaFayette High School with the last one being in 2013. It was a joyous bus ride back to Chambers County with the team entering the city of LaFayette with police escort for their return as champions. The Bulldogs’ thrilling run to the title on Saturday broke a nine-year drought for the boys team since their last state Track and Field championship in 2013. It was a remarkable performance for the shorthanded LaFayette High School boys track team, which has seven member.

The final scoring saw the Bulldogs capture a team-high 71.5 points to win the title. Second place finisher Cold Springs High School finished with 64.5 points, and third-place finisher Westminster School at Oak Mountain had with 59. The two-day competition began on Friday with the Bulldogs finishing the day toward the back of the pack in only sixth place with just eight points earned. Those eight points were won with senior Antavious Woody earning the silver medal for his second-place finish in the shotput event.

Saturday would see the drama increase for the LaFayette squad as they moved to third place with just a few events to go in the day. Coach Corey Thornton and his staff were waiting on potential points to come in for the Bulldogs in both the javelin and high jump events.  Senior Vinay Singh captured the gold medal-winning first place in the high jump with a mark of 6-foot clearing the bar. Fellow Bulldog Joshua Combs also earned three and a half points for his fourth-place finish. It then came down to the javelin, where senior Antavious Woody shocked the field with a personal best throw of 160 feet and 7 inches, earning the silver medal for his efforts. Woody’s second-place finish gave the Bulldogs their final margin of 71.5 points.

However, the drama only increased with the Bulldogs forced to sit and watch the finals of the 4 x 400 relay event with none of the team qualifying for the final heat from the preliminaries. Cold Springs High School could have leapt over the Bulldogs with either a first or second-place finish in the 4 x 400 relay. Oddly, this left the LaFayette squad pulling for their rivals from Lanett High School to place in this final event. Sand Rock High School won the 4 x 400, and Lanett placed second, securing the state title for the LaFayette Bulldogs track team.

Head Coaach Corey Thornton was proud of this team along with his assistant coaches, Michael Pattillo and Derric Baker, for bringing this title back to LaFayette High School.

The coaches were also pleased with the efforts of the Lady Bulldogs track team, which finished in third place overall in their quest for a state title.

The Lady Bulldogs 4 x 100 relay team captured the gold medal in their event with a time of 50.72.