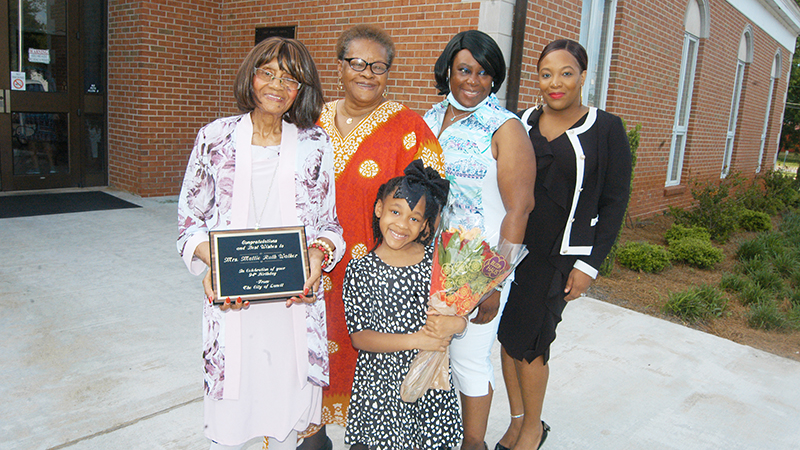 LANETT — The Lanett City Council on Thursday honored a long-time resident who is celebrating her 94th birthday this month. Mattie Ruth Walker was born in Cusseta on May 23, 1928, and moved to Lanett with her parents shortly after that. She has lived in Lanett ever since. She raised seven children, six of whom are still living, She’s now the proud grandmother of 23, great grandmother to more than 50 and is super proud of her nine great-great-grandchildren.

“I am so proud to be here today,” Walker said. “I want to thank everyone for coming here this evening.”

After the presentation, one of Walker’s great-great-grandchildren asked if she could say something. Six-year-old Aria Smith went to the front of the chamber. Smiling broadly, she said she wanted to wish her “grand-grand” a happy birthday.

Lanett Senior Center Manager Sandra Thornton told the mayor and council that Mrs. Walker is a very dedicated member of the senior center. She rarely misses a meeting and always comes well-dressed.

“Her hair always looks so nice, and she knows how to put on that makeup just right,” Thornton said.

Mayor Heard and members of the council thanked Walker on having been a good citizen in Lanett for more than 90 years now.

The mayor said it had been a blessing for him to have been in attendance at a Day of Prayer event during the noon hour on Thursday. It took place on the playground across from W.O. Lance Elementary School. Council Members Tamalita Autry and Angelia Thomas said they had been there, to0, and were glad to have taken part in it.

“Our city has been covered by prayer,” Autry said. “I want to thank everyone for being there. This is something we need to keep going.”

The National Day of Prayer is an annual observance held on the first Thursday of May. People of all faiths are invited to join together and pray for the nation. It was created in 1952 by a joint resolution of the U.S. Congress and signed into law by President Harry Truman. Every year since then the President has signed a proclamation urging Americans to participate in the day.

Lanett council meetings normally take place at 6 p.m. on the first and third Monday of each month. The first meeting for the month of May was postponed from Monday to Thursday because city officials were in attendance at an Alabama League of Municipalities conference during the early part of the week.

In an action item taken at Thursday’s meeting, the council approved a resolution listing what the city had done in its Municipal Water Pollution Prevention Program during the past year. Alabama cities are required to report this each year to the Alabama Department of Environmental Management (ADEM).

According to the resolution, the city is required to maintain effluent levels to prevent the bypass and overflow of raw sewage into the city’s collection system or treatment plant.

Heard said he wanted to thank city department heads and city employees for the work they do every day.

“I think we have some of the best city employees that can be found anywhere in Alabama working for our city,” he said.

Councilmember Thomas said her committee is still working on getting the new airport open.

Thomas is one of three council members appointed to research this issue by Heard. Council members Tifton Dobbs and Charles Looser are the other two members.

Heard said Lanett is not alone in getting complaints about the garbage service that is being provided. AmWaste is the provider for Lanett, West Point, Valley, LaFayette and rural Chambers County.

“It’s my understanding they are understaffed, and the workers they do have are having to work long hours,” Heard said. “That’s why there are delays in getting trash picked up.”

Heard said he was looking to have a community-wide meeting in the near future to discuss something that will be welcomed by area seniors as very good news.

“We will be giving them some information that will be very helpful for them,” he said.

Lanett High School valedictorian says to be true to…