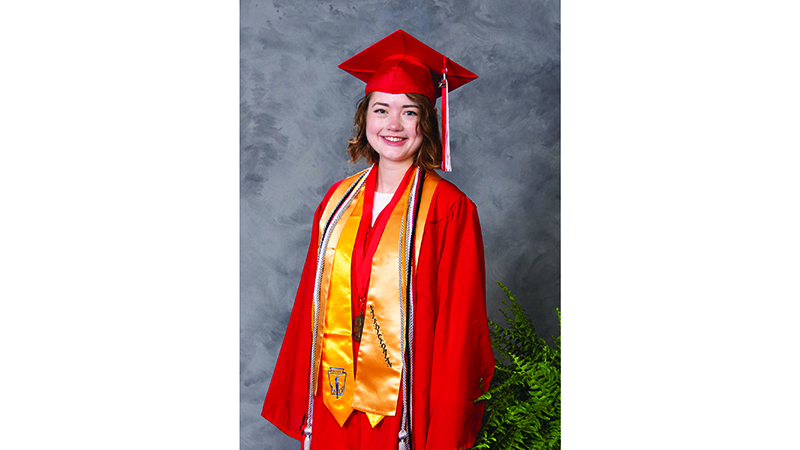 Having been chosen as Springwood School’s valedictorian, Jesilyn Mabrey feels honored to know that her hard work has paid off. She considers being valedictorian and being the president of the National Honor Society to be her two biggest achievements at her school.

Mabrey has been a high-achieving student throughout her academic career.

“My parents tried to push me to do my best, and I was motivated to learn everything that I could,” she said.

She said focusing on goals has kept her motivated to succeed.

Mabry said Susan Oswalt, an English and psychology teacher, has had a big influence on her.

“Ms. Susan Oswalt has been a big help throughout my academic career,” she said. “Just her encouragement and her support and everything meant so much to me throughout my high school career. She’s had me since ninth grade up until this year, so it will be hard to leave her.”

Mabrey’s most positive experience at Springwood has been bonding with classmates and enjoying the support system that created. She said she would tell anyone considering coming to Springwood that it’s a great place to make friends.

“The friendships you make here… it’s really nice to be that close to somebody and see somebody multiple times a day, know the names of everybody who’s in your class,” she said.

Mabrey recommends that current Springwood students enjoy friendships and seize opportunities while they still can.

Springwood’s teachers, Mabrey said, are helpful and make sure students understand their lessons.

Mabrey plans to attend college at Rose-Hulman Institute of Technology.

An obstacle Mabrey has faced at Springwood is balancing schoolwork and extracurricular activities. She participated in many activities such as theater, soccer, track, cross country, tennis, the Scholar’s Bowl, the Math Team, the National Honor Society, the robotics team, chorus and Springwood’s art program.

If she could change one thing about the world, she would make people less biased against others.

“You can look at someone and not even know anything about them, and people have already made their judgement, and they’re not willing to change that,” she said.

Mabrey was born in Grosse Point Michigan. She moved to Lanett when the nearby Kia plant opened in West Point.