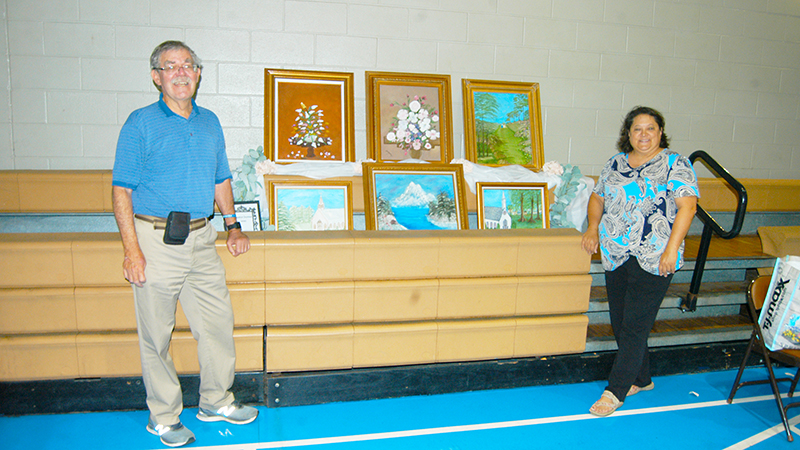 Setting up the exhibit: Don Cleveland and Cathy Crosson (above) were at Valley Community Center Friday afternoon setting up an exhibit for this weekend’s Valley Arts Council Memorial Art Show. The exhibit shows the work of the late Jacqueline Jones, who was in her nineties when she passed away this past December. “She was well known and much involved in the community,” Cleveland said. “She loved to paint flowers, churches and angels.” Mrs. Jones lived in West Point for years and at one time was the neighbor of Floyd and Aileen Love. Photo by Wayne Clark.

VALLEY — The works of more than 40 artists with local ties are being exhibited in this weekend’s first-ever Valley Arts Council Memorial Art Show at Valley Community Center. The show will be taking place in the Community Room from 9 a.m. until 5 p.m. EDT on Saturday and from 1 p.m. until 4:30 p.m. on Sunday.

“It has been a lot of work to get this together, but we are really excited about it,” Arts Council President Suzie Britt said. “Some of the artworks we are showing have never been exhibited before. The people who created them with their own hands were humble people who didn’t consider themselves artists, but friends, family members and anyone who saw what they did knew that it took exceptional skill to produce it.”

The works on display include conventional art items such as oil, watercolor and acrylic paintings and ceramic items to needlework items such as quilting, crocheting and tatting. There are also ceramic items made by Nell Cato in her ceramics shop back in the 1960s and tiny houses made of pine burr shavings and tiny river stones by Clinton “The Walkin’ Man” Kirk.

There are also treasured local images of local scenes taken by Cecil Carroll and Harold Smith and award-winning photos of Vietnam vets after the war taken by Atlanta native Marvin Rhodes, who was living with his wife in Shawmut before dying of cancer.

Some artworks everyone will want to see were created by Langdale native Dan Parkman. He made the wooden ducks and the hand-carved rabbits that were on display at the Langdale Kindergarten, known now as the Cotton Duck.

“There are so many great stories in the artworks people will see,” Britt said. “River View native Dee Scalf painted some gorgeous images of Jerusalem when he and his wife, Patty, were serving as missionaries in Israel. I’m sure people will like to see the paintings of Leon Duffey, who loved to paint-covered bridges, and familiar scenes from Langdale such as the Cotton Duck, Langdale School and the Kissin’ Bridge.”

Landscapes, nature scenes and autumn settings painted by Jeanette Mason will be at the show. People remember her from the adult art classes she used to teach and from seeing her at the Village Curb Market, a popular local business she and her husband, Evan Mason, ran just off Highway 29 in Valley.

Barbara Johnson was one of Mason’s students. Some of her paintings are being displayed.

“She was an excellent oil painter,” Britt said. “She loved to paint wildlife scenes and old houses.”

Verna Tatum, who taught school for many years in Shawmut, will have paintings on display.

People from Fairfax will remember Ruth Hicks as a devoted Christian woman who had a beauty shop and loved to paint images of crosses. Some of her works will be on display. She had in her kitchen something she called a warrior board. On it, she would paint the names of Christian warriors she knew from the local area and beyond.

“He had ink and pencil drawings of many local churches,” Britt said. “He also drew or painted many well-known sites in the Valley.”

Artworks done by Frances Gladden of West Point will be on display.

“She loved to draw and to work with watercolors,” Britt said. “She had a special love for both growing and painting flowers.”

Jean Henderson was a gifted artist with an interesting story to tell. At one time, she and her twin sister were famed dancers on Broadway in New York City.

Works done by Gail Dyess of Lanett will be on display. She loved to paint horses and taught art to both children and adults.

Many people remember Theron Sorrell for running The House of Flowers in Valley for many years. In addition to being a talented floral designer, he also made some beautiful quilts. He was also talented in crocheting and tatting. Some of his works will be on display.

Works done by Vera Medders of Lanett are at this weekend’s show. Her gift for art runs in the family. Thea McKelvey is her great-granddaughter. She’s well known in the local area for her gift of art.

Peyton Whitehead died at a young age but left some amazing works of three-dimensional art. They can be seen at the show.

The works being displayed this weekend were done by people who are no longer living but who left a legacy that lives on today in the works of art they created.

Britt said that it was really hard in some cases to locate family members of those artists. Harold Smith was one example. He was a well-known portrait photographer in Lanett at one time.

“It took some digging, but I located his widow Opal,” Britt said. “She’s in her nineties and is living on Judge Brown Road in Valley. She was a wealth of information. She told us that her husband took a lot of aerial photos or West Point Dam and Lake when it was first built.”

The show is displaying the artworks of Britt’s mom, the late June Wheat, and her friend and neighbor, Joan Hodnett. Wheat grew up in the Atlanta area and earned a degree in art education and design at the University of Georgia. She taught art for many years in Atlanta area schools before relocating to the Valley, where she taught art at the Valley campus of Southern Union State Community College.

“Mom’s first love were abstracts, but her true skill was in realism,” Britt said. “She worked in all mediums. Mom and Joan were neighbors living in Lanett. Joan grew up in England and was a World War II war bride. She was a self-taught artist and was very good with oils and watercolor. She was also very, very good in decorating cakes. She and my mom were very good friends for more than 50 years. Joan’s husband was a pastor.”