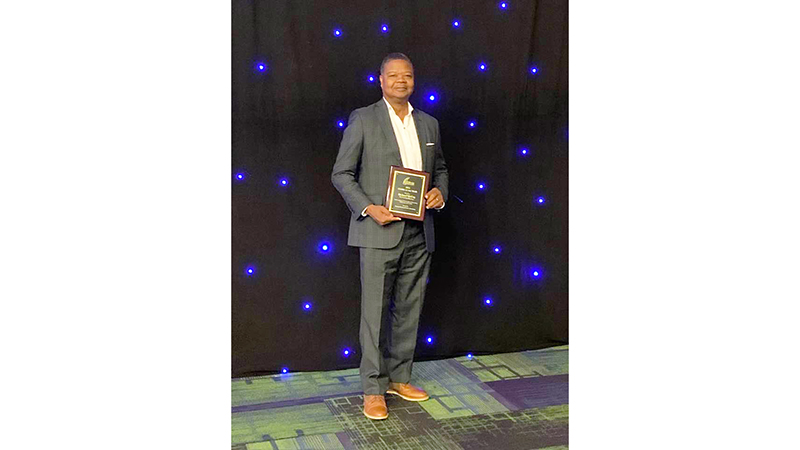 City clerk of the year: Richard McCoy stands with his plaque after being named Clerk of the Year. Photo contributed.

McCoy, who has worked as the city clerk since 2007, received the award at the Georgia Municipal Association’s annual meeting in Savannah. Before taking on the position of city clerk, McCoy worked as West Point’s assistant city clerk and human resources manager.

According to their website, the Georgia Municipal Clerks Association promotes the highest standards of excellence among city clerks in the areas of leadership, service, integrity and professionalism by providing networking opportunities for discussion of municipal challenges. Each year, the association recognizes one clerk who exemplifies these standards with the Clerk of the Year Award. The municipal clerks association made the decision to honor McCoy, and the decision was announced at the GMA conference.

McCoy has worked in the GMCA for several years and has served as a mentor to new members. Furthermore, McCoy currently serves as the GMCA’s district four director, which manages nine different Georgia counties including Troup, Heard, Carrol, Coweta, Meriwether, Pike, Lamar, Upson and Butts.

When asked to make a comment, McCoy expressed his gratitude for receiving the award and thanked all of those who have supported him in his position.

“I want to thank my mayor and council because they gave me the tools I needed to be successful,” McCoy said. “I would also like to thank the city staff, as we are a team. Without them, we would not be as successful as we are.”

He also thanked the GMCA itself, noting that “the networking that it has provided has been very helpful.”