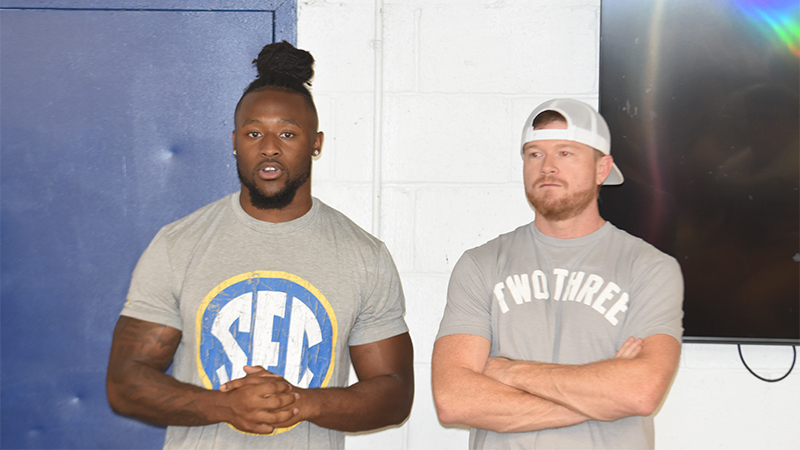 Pappoe was there with his friend Chris Strength, who is a Chambers graduate, and Tamall Calloway, who is a VFX director and helps out Pappoe. They helped bring the whole thing together with head coach Jason Allen.

Strength is a Lanett native whose son is a Chambers Academy Student. Calloway is an Opelika native who has directed many videos for famous rappers.

The team gathered in the film room, and Allen led them all in a prayer. After the prayer, all the players had the opportunity to ask Pappoe a few questions.

While some of the kids asked Pappoe about his favorite stadiums and NFL teams, others asked about certain questions that pertained to life and college.

Both Pappoe and Strength stressed the importance of working in life to the kids. They wanted the players to know that football is what they need to cherish this moment because not everyone will play football in college.

Strength stressed to the kids that life was only going to get harder as they went along.

Auburn will start fall camp next week, but Pappoe took time out of his life to speak to the players.

“I built a relationship with Chris through my man Keiondre Jones,” Pappoe said. “He’s one of my teammates. Chris presented this opportunity for me, and I trust him now so I just came out and did him a favor.”

Jones is originally from LaGrange and played at Callaway.

This was Pappoe’s first time ever at Chambers Academy, and he’s from Loganville.

Strength also described how they made this happen.

“I had a friend that went to a school that’s close to here,” Strength said. “He linked us up. We were actually doing a car wrap for him. Through that, we built a friendship through it. I wanted to bring Owen and Allen together because they’re both great people.”

Pappoe stressed what he wanted the players to take away from their talk.

“Just remember your why,” Pappoe said. “You play football for a reason. It helps you get into school. You get your education. You go hard in the weight room. You build relationships with your teammates. Most importantly, you make your family proud. That’s what I want them to take away from it.”

Pappoe also expressed that the college experience is important.

“Just enjoy it,” Pappoe said. “Everybody says this is going to be the best four years of your life, so make the most of it. Be smart about it though. You don’t want to do something crazy and end up in the paper. Just enjoy it and cherish these days.”

Coach Allen was also very pleased to have Pappoe come out and speak.

“Any time you can get another perspective across to our kids, it’s neat for our guys,” Allen said. “They hear my voice all the time. It’s nice for them to see how wonderful football is and how it can turn you into a man.”

Allen also explained how he set this whole thing up.

“Chris is a good friend of mine,” Allen said. “He’s been talking to Owen all summer about coming up and talking to our guys. Owen seemed like a great guy who’s willing to give his time to young people. That’s so important in this country. It means the world to me for a guy from Auburn to give back to these kids. He may have said something today that will make a difference in their lives down the road, and that’s what I want to accomplish.”

After the speech, the players went out and practiced, and Pappoe got to witness how Chambers Academy practiced in pads.

Coming through the ashes, Clifford Story updates the progress…