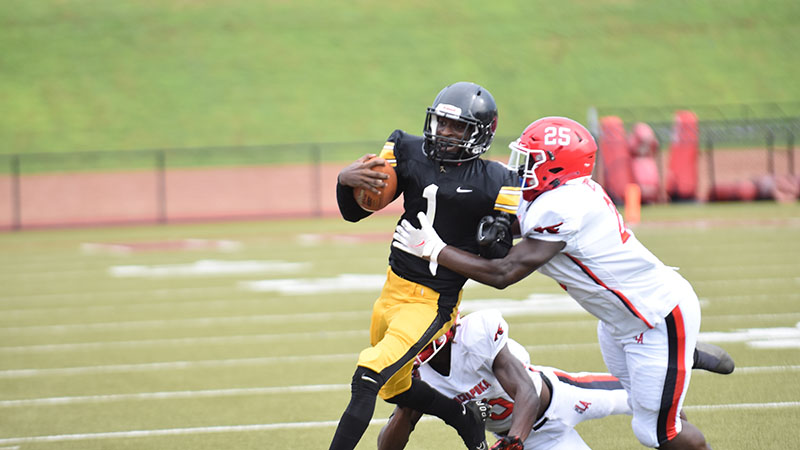 The LaFayette Bulldogs dropped their season opener on Saturday to Loachapoka 38-6 at Handley’s Wright Field.

The Bulldogs struggled throughout the whole game offensively as their only touchdown came from the defense.

“We have to coach better. We have to play better,” LaFayette head coach Juan Williams said. “The kids got hit in the mouth. We played a good first half and then it went to pieces in the end. We’ve got to figure out why it went to pieces. We can’t have kids on the sideline when you need them. We didn’t answer the call tonight.”

LaFayette had some decent ball movement early on, but a couple of failed fourth down conversions left them in a tough spot on defense.

It also didn’t help that LaFayette quarterback Zae Towles went down with an injury after the first drive.

Junior AJ Patrick took over at quarterback for the remainder of the game.

“He did as well as expected with knowledge of half the offense,” Williams said. “You have to shorten the playbook down, but things happen. Kudos to Loachapoka. We just have to get better.”

Loachapoka scored on its first drive after running back Jamaroun Satterwhite tore his way into the end zone to make it 6-0.

LaFayette earned some defensive  momentum with a sack, but its momentum came to a halt when a lightning delay interrupted the game halfway through the first quarter.

It wasn’t until the end of the first quarter that the Bulldogs turned things around when defensive back Joshua Combs stripped the ball and returned it for a touchdown to make it 6-6.

Williams was pleased with Combs.

“He played well,” Williams said. “We conditioned, but we have to condition better.”

For the rest of the half, the Bulldogs struggled to get anything going offensively as some high snaps made moving the ball difficult. After being backed up in their own redzone on a 3rd-and-49, LaFayette quarterback AJ Patrick fumbled, and that led to Loachapoka’s Satterfield scoring his second rushing touchdown of the half.

The Bulldogs trailed 14-6 at halftime.

The Indians scored a touchdown on three of their four drives in the second half.

At one point in the game, the Bulldogs faced a third-and-49.

The Bulldogs will travel to Bullock County next week.”