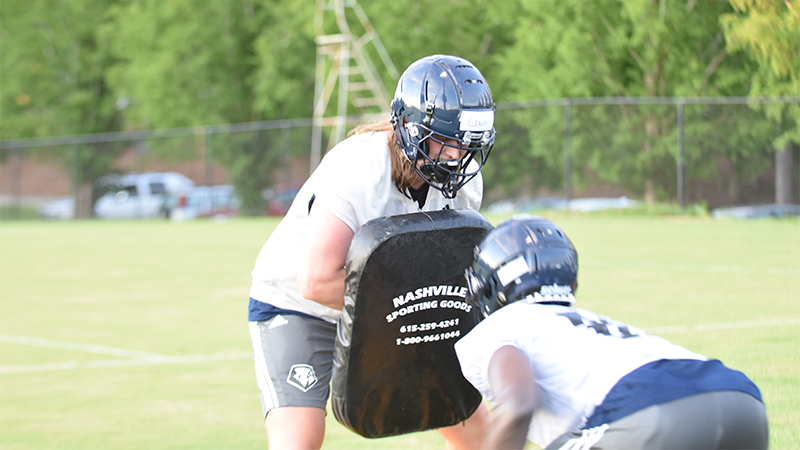 Point’s football team reported to campus on Monday, but they began their first fall practice under head coach Trevor Zeiders on Wednesday.

After dealing with administrative duties on Monday and Tuesday, they started practice Wednesday night, and Zeiders was pleased with their effort and motivation.

“We reported on Monday, and the first day was just a move in day,” Zeiders said. “On Tuesday, we did some cardiac testing to detect any heart issues. We finally had our first practice on Wednesday. It was big to see great energy and a lot of hard effort out there. We saw a lot of enthusiasm. Energy and enthusiasm is kind of a cornerstone for us.”

Although the players only had two days on campus before they had to practice, Zeiders thinks their eagerness to get on the field only made it better.

“Not only were they prepared, they were more than ready,” Zeiders said. “They were bored from sitting around for two days taking care of all the administrative stuff. They wanted to go from football camp directly to football camp. They didn’t want to fill out any paperwork or anything. That’s great, but other stuff has to get done first.”

There are some areas of improvement for Point during fall camp, and Zeiders knows they need to work on those.

“The biggest areas are the offensive line and developing a couple defensive ends,” Zeiders said. “We need to improve quickly with those, and we have to find a wide receiver out there.”

As far as position battles, the quarterback competition will be key for Point.

Payton Allen, Brenton White and Mitchell Gossett will all be vying for the starting job.

“The quarterback position is a three-horse race,” Zeiders said. “They get equal reps every practice. We look at if they’re making the right reads. We look at completion percentage. Do they make the right decision? They might make the big throw, and it might have been the home run hitter, but at the same time was it a forced throw? We have to look at how they do managing the run game. Did they get us into the right play? Once we get more into our scrimmages, we’ll determine who gets more reps.”

Zeiders has been very pleased with his team’s work ethic in practice this week.

“I’m really surprised. It’s been some of the best early practices of a camp I’ve ever been around,” Zeiders said. “It’s mostly because of the energy and the effort. There’s a lot of leadership being shown by the upperclassmen. They’ve taken strides to get better.”

Point will play its first scrimmage on either Tuesday or Wednesday, but it will be a half scrimmage. They will play a full scrimmage next Saturday.

For Zeiders, this will be his first fall camp at Point, and it won’t be too much of a change from being defensive coordinator.

Last year, I was just concerned with the defense. Now, everybody is a worry. I see why they say the higher level coaches are CEOs. You’re managing a company of 120 to 130 people, and every decision you make affects them.”

As part of his CEO role, Zeiders delegates his offensive duties to offensive coordinator Greg Forest.

“I delegate almost all of the offense to him,” Zeiders said. “I’m a big believer in having a specific job. I don’t want to be a micromanager. That leads to many unhappy employees. I’m still very busy on the defensive side of the ball. I still have my input on the offensive side, but I’m very pleased with what those guys do, and I let them run with it.”

Zeiders has also started investing in new equipment for his program. He received new remotes this week that will help his coaching staff when it comes to watching film. He’a also planning several other improvements.

“This year, we got new helmets,” Zeiders said. “We got 34 new pairs of shoulder pads. We’re trying to upgrade our gear. I’m not a believer in the Oregon system where you need to have 18 different uniform combinations for every day of the week. I believe in simplicity. I want to try to have the best of what’s available to them.”

Zeiders also wants his players to be proud of the equipment they have.

“We talk a lot about our field house being our show place,” Zeiders said. “One of the things we’re working on is cleaning it up and making it look more shiny so if a recruit shows up, we can show off and welcome them in here so they can get the best feel of the program.”