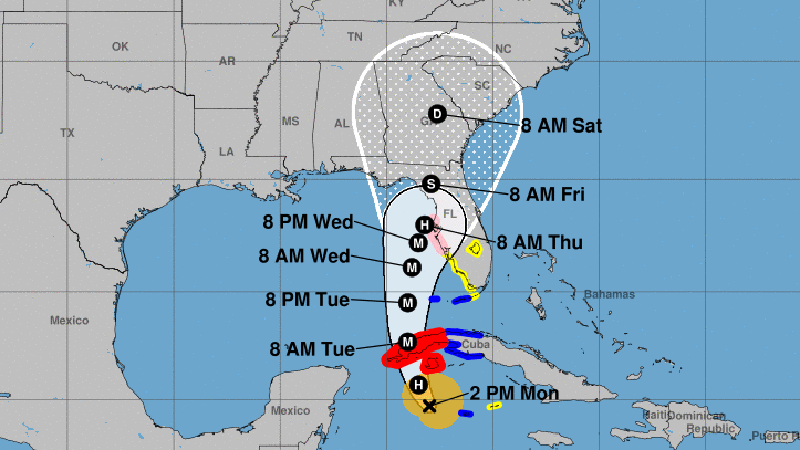 Weather experts say Ian, now a hurricane, could be a tropical storm or depression by the time it hits Alabama and Georgia, but Florida is bracing to be hit hard.

According to the Peachtree City National Weather Service (NWS), Ian became a major hurricane within the last 24 hours as it hit western Cuba. Sustained winds were measured at 75 mph on Monday morning with gusts of over 110 mph.

The storm is projected to shift northeast as it approaches the northern and central parts of Florida.

The path of the storm and its strength by the time it hits the U.S. are still uncertain.

On Monday morning, the National Hurricane Center (NHC) warned that a life-threatening storm surge is possible along much of the Florida west coast. The highest areas of risk are the Fort Myers and Tampa Bay areas.

Florida Gov. Ron Desantis has declared a State of Emergency for all 67 Florida counties on Saturday as the storm intensified.

Depending on how the storm travels, tropical storm conditions could hit the western coast of Florida as early as late Tuesday, according to NHC.

“The current forecast has [the center of the storm] making landfall around Friday morning in northern Florida,” NWS Meteorologist Adam Baker said. “It could be weakening into tropical storm status at that point.”

“When it approaches Georgia, if it stays on this previous forecast track, it could be weakening from a tropical storm to tropical depression, as the center moves into the state,” Baker said.

What the center of the storm does by the time it hits west Georgia and East Alabama — if being the important descriptor — is still uncertain at this time.

“This is pretty much getting into the extended part of the forecast for the storm,” Baker said. “There’s probably going to be some more changes and adjustments to the forecast.”

“Regardless of the center of the storm, we’re going to have some pretty gusty winds just based on the pressure gradient ahead of it. So, some of the gusty winds in the state of Georgia, and some heavy rainfall could actually begin early Friday and continued throughout the day and Saturday.”

Baker said Georgia is likely to possibly see a 36 to 48-hour period with heavy rains with possible flooding and gusty winds across the state.

If it does continue on this path, heavy rainfall could make the soils easier for trees to down, even if the winds aren’t extremely high, Baker said.

“Some pretty good gusts could actually cause some power issues here,” he said. “We want to make sure people have a heads up and not focus just on the center of the storm.”