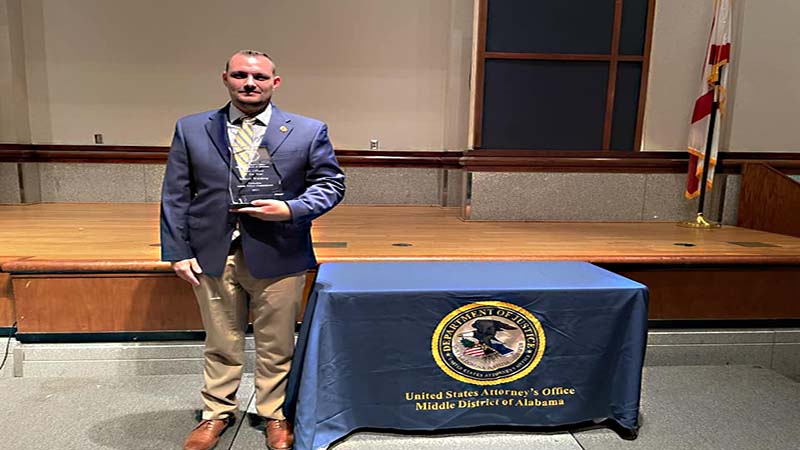 Lanett Police Department Det. Sgt. Robert Waldrop received the Local Officer of the Year award on Sept. 29 from the United States Attorney’s Office Middle District of Alabama for his excellent work on a 2018 bank robbery case.

“It feels really awesome to be recognized for a case that I put together,” Waldrop said. “People tend to think that once you get an arrest, that’s kind of the end of it, but you actually have to have the case solid to be able to see it through in court.”

In 2018, Waldrop headed the bank robbery case at Farmers and Merchants Bank. Law enforcement apprehended the three suspects within five minutes of the crime taking place.

Due to COVID-19, the police department and attorney general didn’t get to try the case until 2020.

Waldrop and fellow officers worked together to make a case against the suspects that would end in a conviction. After their efforts, Waldrop said the conviction was an accomplishment for himself and the other officers, even without the award.

“This was just kind of like the icing on top of the cake,” Waldrop said. “It’s just really humbling.”

The Attorney General’s Officer of the Year award recognizes individual state, local or tribal police officers, deputies and troopers for exceptional or innovative police work, according to their website. Waldrop said he sees himself as a fact finder whether that benefits the victim or the suspect.

“The way I’ve always looked at my job is to be fair to everyone,” Waldrop said. “Treat everyone the way I would want to be treated whether that be the victim of a crime or the offender of a crime.”

However, Waldrop said that the accomplishment was a team effort.

“It just happened to be a lot of people in the right place at the right time,” Waldrop said. “I would not have received this award if it wasn’t for the hard work that everybody else put in as well.”

Waldrop has been working at Lanett Police Department for the past eight years. The detective said he has seen great improvement in the city of Lanett since he began working here.

According to Waldrop, when he began working at the LPD, it was one of the more dangerous cities in the area. He hopes to see the city continue to grow prosperous and crime rates continue to decrease.

“We’ve come a long way since I started on it,” Waldrop said. “My hope would be that we continue to provide our citizens and visitors with a safe place to come, and hopefully we can grow this area.”