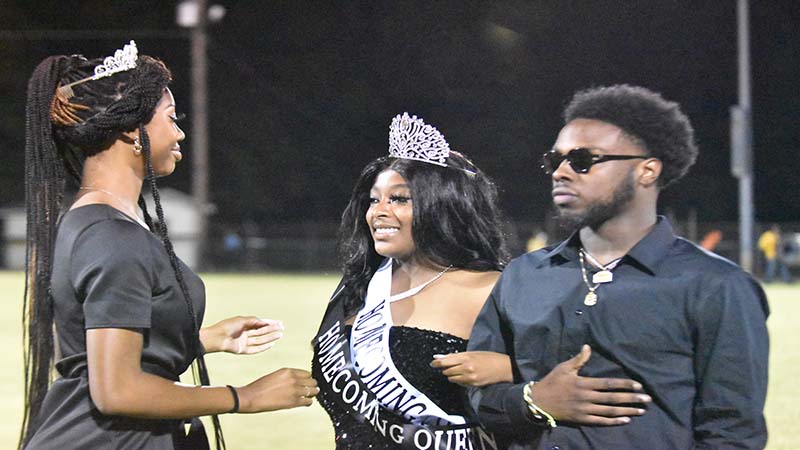 Editor’s note: This is the second in a series of features on this year’s homecoming queen for each school.

“I didn’t know what to do or think,” Story said. “It was shocking.”

Story has been an active part of Lafayette High’s campus pride. She is the cheer captain at Lafayette High. She is also a part of the Student Government Association and Unite club, which helps high school students with ACT and college prep.

Story spends her free time babysitting her nephews and hanging out with her friends.

Story’s favorite part of the experience was getting to know more students at school from ninth to twelfth grade. She spent a lot of time meeting new people while she was campaigning.

“I enjoyed doing everything from campaigning to making posters to passing out flyers to being in the parade,” Story said.

As much as she enjoyed getting to know her classmates, Story still felt the pressure of her responsibilities on the homecoming court. From the moment she found out she was nominated, Story began campaigning throughout the entire school.

“This whole thing was really stressful,” Story said. “I had to get a lot of stuff. I had to campaign for the whole school. So there’s like 200 students in this whole school, but it was fun.”

However, Story is no stranger to hard work and has high hopes for the future. She plans to go to a four-year college and become an occupational therapist.

Finally, the moment came that Story will look back on for years to come. During the halftime show, the homecoming court was introduced.

Story was so happy when her name was called. After such hard work, being named homecoming queen felt well-earned.

“I feel like it’s showing that I’m a good leader and that people look up to me,” Story said.

One thing that Story learned from this experience was the importance of kindness toward others.

“I learned to always be nice to people because they really consider that as, ‘yes, she is fit for that position,” Story said.

True to her outgoing personality, Story said she is grateful for the opportunity to represent her classmates and her high school and sent her congratulations to her friends on the homecoming court.

“I just want to say thanks for voting for me and letting me represent the school inside and out,” Story said. “And to the people that were on the court, no matter what, we are all winners.”