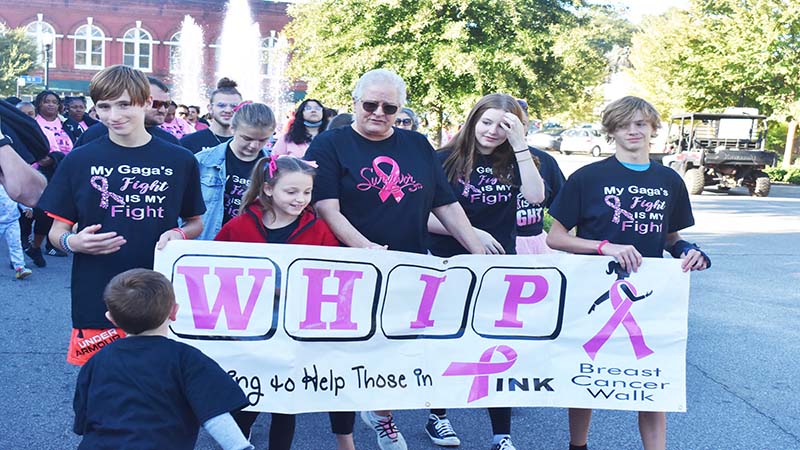 A nice-sized crowd had assembled near the fountain and the early morning sun was rising over the downtown buildings when Mayor Jamie Heard welcomed everyone to the special Breast Cancer Awareness Month event.

“I want to thank Team WHIP for having this walk today,” he said. “We hope everyone enjoys taking part.”

WHIP stands for Working to Help those In Pink. Team WHIP Founder Narfunda Ross said that the Saturday morning program was for the entire local area.

“It’s not a Narfunda event, it’s a community event. I want to thank you all for being here and participating in it,” she said.

Ross, her mother and sister each survived breast cancer.

City Chaplain Rev. Rodney Jones opened with a prayer, and Council Member Angelia Thomas got everyone fired up by predicting that there will be a cure for cancer one day.

Torrance Russ then talked to the crowd about the importance of having an active lifestyle.

“There are some great benefits to having an active exercise life,” he said. “The more active you are, the better chance you have in staying healthy and fighting off disease. Being active gives you a better chance for a longer life.”

He encouraged everyone to think in therms of one of Newton’s Laws of Motion — a body in motion tends to stay in motion.

The walk started up North Lanier Avenue with the Chambers County Sheriff’s Office’s pink Camaro leading the way. The car is known as Meagan’s Car in memory of Meagan Bonner, who died at a very young age of childhood cancer. Some tents were set up in the courtyard area outside the Jane Farrar Event Center. Paramedics from Lanett EMS were there giving free blood pressure checks, and personnel from Valley Pharmacy were on hand giving free Covid shots. Staff members from the Chambers County Circle of Care Center for Families gave out information about what they do and answered questions.

Kim Roberts and Robin Pierre of the Chattahoochee Fuller Center Project (CFCP) had a booth where they were giving away Halloween costumes.

“We gave away 150 of them,” Roberts said. “The costumes were for children in pre-K up to early teens, and the kids loved it.”

The costume giveaway capped off what had been a very busy week for Roberts and Pierre. CFCP Homes No. 74 and 75 were built on North 12th Avenue in Lanett’s Jackson Heights neighborhood. In just 15 years of building new homes for deserving people, the CFCP has reached diamond jubilees status.

“On Friday afternoon, we had a small dedication at one of the houses to thank our volunteers for what they did,” Roberts said. “Residents should be able to move in before Thanksgiving. We want to have a big citywide dedication at that time.”

Except for some touch up painting, the exterior work is done on both homes. Some interior work needs to be done.

This includes the installation of cabinets, some flooring and the vanities along with ceiling fans and some lighting.

The new homeowners include Alexandria Williams, who has two school age daughters., and Terrance Griffin, who has three young daughters.