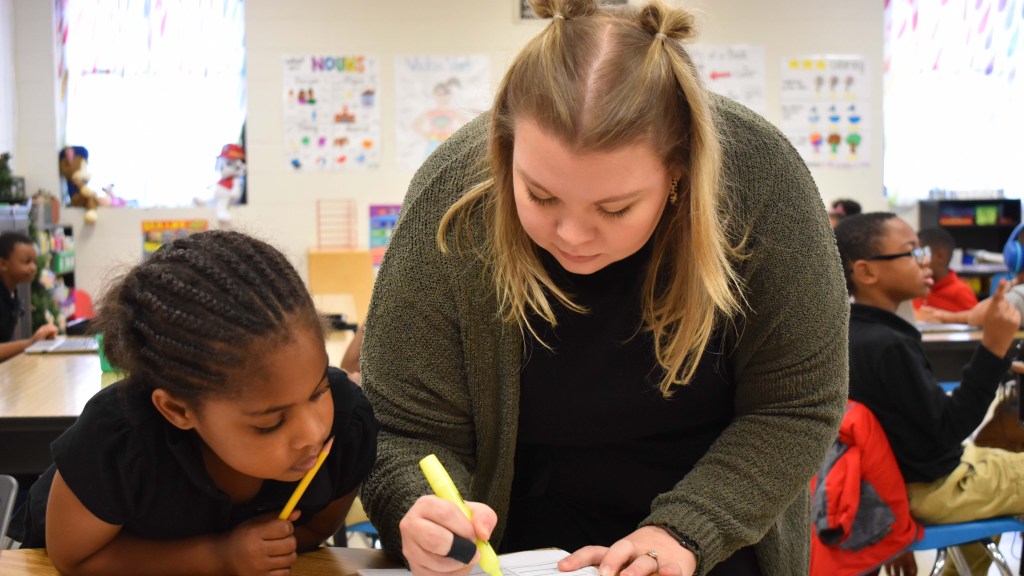 After three years at Eastside Elementary, Kindergarten Teacher Sarah Cook has won the Teacher of the Year award. With her dynamic approach to positive intervention and hands-on learning, Cook has impressed her peers and the parents at her school.

“I was not expecting that at all,” Cook said. “Since this is only my third year, I was very shocked that it was me.”

Cook began teaching in 2019, the school year that the pandemic hit. Though she had expected to teach an older grade, Cook quickly learned that kindergarten was where she belonged.

“Kindergarten is just a very special place to me. You get all kinds of children, because they have all different types of experiences,” Cook said. “So, now kindergarten has become my happy place. I don’t think you can pay me to leave kindergarten — for right now at least.”

Cook studied elementary education with a specialization in English as a second language at Point University. By taking the job in kindergarten, Cook gets to use a lot of the same techniques that she would in an ESL class.

“That’s kind of where my heart is,” Cook said. “So I get to do a lot of that with kindergarten because they’re just now learning all their letters and sounds, which is basically what you do for someone who’s learning English for the first time.”

At first, Cook was very nervous to teach kindergarten.

However, she soon made a deep connection with one of her students. During her first year, she got the opportunity to work with a student who spoke very little english and use her ESL training.

Their first year together Cook focused on getting her accustomed to the content and classroom. By the end of the year, Cook had gotten permission to teach the student for a second year in order to get her up to the standards she needed for first grade. The bond they developed was very meaningful to Cook.

Cook also brings a blend of teaching methods to the classroom, the most prominent being positive intervention and redirection. She said that she spends a lot of her day using redirection to keep students on-task rather than being punitive.

“It’s a lot of redirection. I have a ‘we don’t raise our voice’ motto,” Cook said. “I use a PBIS system in my classroom. Basically, I reward positive behavior instead of harping on negative behavior. And I’ve found that helps a whole lot, because it changes my attitude towards it, too.”

Cook said that she doesn’t follow any one teaching philosophy but instead builds a base relationship with the class and then adjusts her methods depending on their individual dynamics.

“Last year, I had a very independent class that was very advanced,” Cook said. “They were able to do a whole lot of things that I wouldn’t expect five and six year olds to be able to do first off in the year. So I was able to do a lot more project-based learning, hands-on type of things.”

It is important to Cook that her students play an active and engaged role in their learning. She tries to make sure that they are up and moving around the room, not just stuck in their seats.

“We are up and around the room. We are doing hands-on activities all the time,” Cook said. “I don’t want the kids to come to school and feel like they’re required to sit in a chair for eight hours a day. I want them to be actively engaged in their own education and feel like they have a stake in what goes on at school.”

Last week, Cook’s class worked on a Thanksgiving day research project. The students did research on their Chromebooks to learn about pilgrims and indigenous people to figure out what Thanksgiving means to them.

“I didn’t know if I wanted to take on a whole research project with kindergarteners. But that’s what we’re doing for some crazy reason,” Cook said. “It’s going really well. They’ve been doing research on their own on the computer, and they’ve been watching YouTube videos on turkeys and pilgrims and indigenous peoples.”

Like her students, Cook is also known to take on extra projects that need to be done around the school. Cook was very grateful to be recognized her hard work and dedication.

“I felt honored that people felt enough about me and how I am as a teacher to want to nominate me to be Teacher of the Year,” Cook said.