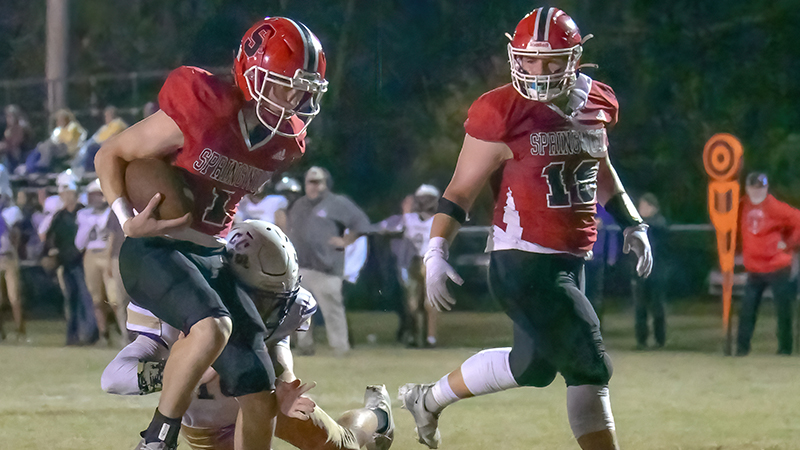 To start the season, Springwood’s football program was teetering on non-existence, but on Friday, the Wildcats took one more step to a state championship as they demolished Cornerstone 50-8.

Coming into Friday’s matchup, there was a concern that the Wildcats would be sluggish after a three-week break.

“I was very worried because of just being rusty and timing, and you know, it’s hard to practice,” head coach Joey Burch said.

Some doubts were quickly shed when Johnathan (Jon-Jon) Johnson took the first snap 48 yards to the house to start the game. Johnson finished the game with 144 yards on the ground and a touchdown.

If anyone still had butterflies, those were also eliminated when Springwood recovered the ensuing kickoff. On one play, Eli Johnson sprinted 47 yards to paydirt and just like that, the Wildcats had a 16-point lead.

Cornerstone took its next series the length of the field but came up short after back-to-back sacks, setting up a Wildcat drive that would again find paydirt on a Ben Cooper quarterback keeper from the one-yard line with 2:36 left in the first quarter, pushing the Wildcats up 24-0.

Springwood’s defense fed off the offense’s success and shut down the Chargers in both the run and passing game.

With time running down in the first half, Cayden Cook bulldozed his way into the end zone, giving Springwood a commanding 30-0 lead headed into the second half.

At halftime, Burch said his team needed to remain focused to avoid a comeback similar to the first time these two teams clashed.

“They came storming back from a 24 point lead the last time we played them, so I think that is on our mind, so we’re not going to let up,” he said.

Cornerstone avoided the shutout with 7:53 left in the third quarter with a 19-yard touchdown pass to Jackson Waugh moving the score to 30-8.

It took Springwood 1:06 to answer the Charger’s score with a 20-yard Ben Cooper run and took a 28-point lead into the final quarter of play.

Colt Pearson put the icing on the cake with an 89-yard touchdown run with 1:50 left in the game.

Springwood finished the game with 518 yards total offense. 370 yards rushing and 148 through the air. Defensively, Anthony Keafer and Tucker Sides logged one sack a piece.

The Wildcats played virtually error free and no turnovers, something Burch said was the key to punching a ticket to the Cramton Bowl. The last time his team faced Cornerstone they committed five turnovers and lost 52-50.

“I think we’ve learned lessons from early in the season where eight-man ball is a wide-open game and can score lots of points quickly,” Burch said. “We kept the gas on them, we didn’t have any turnovers, so we have improved greatly since that loss.”

Springwood will face Evangel, who beat Southern Prep 40-12 in the Cramton Bowl in Montgomery Thursday. Kick-off is set for 10 a.m. Central.