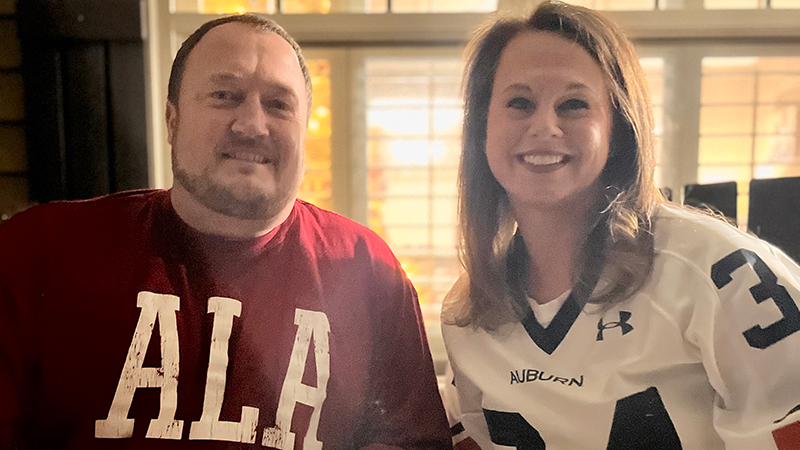 The Iron Bowl is the premiere rivalry in Alabama and  possible the country, but some couples test their relationships and loyalties to their team with the rivalry.

Hollye and Jeremy Colley have been married for eight years, but their marriage has stood strong despite Hollye being an Auburn fan and Jeremy being an Alabama fan.

Hollye and Jeremy met in high school, and their relationship has stood through several rivalry games.

They have three kids, and Hollye’s father convinced two of them to become Auburn fans.

The Colley’s also live in Shawmut.

“He was in the army while I was in college, and we got back together,” Hollye said.

“It gets a little rowdy during football season. I grew up an Auburn fan. My dad is an Auburn graduate. He eats, sleeps and breathes Auburn. He takes our two oldest boys to the Auburn game. When we had our youngest son, Cade, Jeremy was determined that he was going to be an Alabama fan. My dad has taken someone in my family to Auburn games for the last 20 years.”

Both sides of their families heavily lean towards one of the teams.

The rivalry even found its way to their pets.

The Colley’s two dogs are named Cammie and BoJack after the two Auburn Heisman winners, Cam Newton and Bo Jackson.

“When we had Cade, I said me and the dog aren’t going to be the only Alabama fans,” Jeremy said.

“The six year old has no choice. The dogs don’t know it, but they’re Alabama fans.”

Hollye remembers when their son, Jax, had his ninth birthday party at the Iron Bowl.

“Jax took some of his friends to the Iron Bow. It was his best friend, Mason’s, first time going to an Iron Bowl,” Hollye said.

“My dad said,’ That’s it.’ He’s never taking any more of Jax’s friends back because Mason was an Alabama fan was crying the whole way home because Alabama lost that game. We made a big sign for Gameday on ESPN to try and get on TV, but I don’t think we got on. We do get a little heated.”

“The Auburn fans are a little more die hard than I am,” Jeremy said.

Hollye and Jeremy do watch the Iron Bowl together, and it doesn’t affect their marriage.

“It would be a great birthday present if Alabama wins, but Auburn is known for upsets, so I don’t think that’s going to happen. We’ll have some friends over and watch it together. Hopefully, there won’t be any fights.”

Jeremy laughed at the idea of getting a third dog and naming him Bryce after last year’s Alabama Heisman winner, Bryce Young.

“I may rename on our dogs,” Jeremy said.

“You’re not renaming them,” Hollye said.

“We’ll have to get a new one. We don’t get that heated. The older we’ve gotten, the more mellow we’ve gotten. We used to be a little more heated than it is now. I’ll be happy for Jeremy if Alabama wins on his birthday. I won’t be happy if Auburn loses. We don’t let it get too heated in our house. We don’t have any bets on the game this year, but we should. We have to be thinking about that now.”

The Iron Bowl will be played at Bryant Denny Stadium on Saturday in the 87th all-time meeting between the two schools.