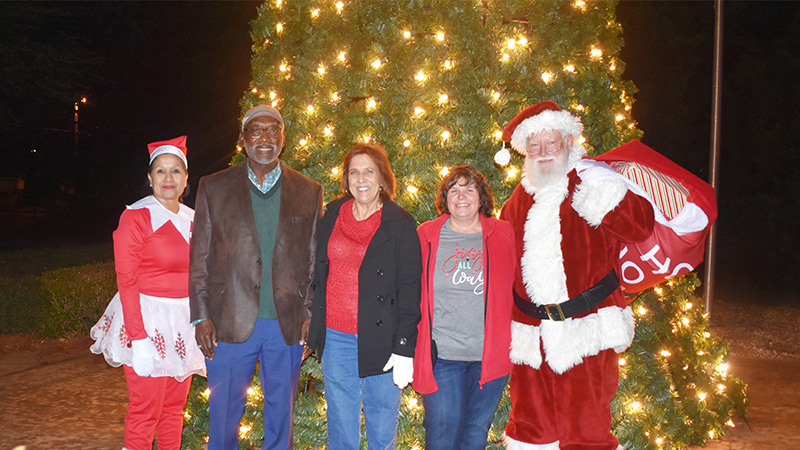 LANETT — A good-sized crowd turned out for Monday evening’s tree lighting on the playground across from W.O. Lance Elementary School in Lanett. The weather was unusually warm and pleasant for a December evening, and people took advantage of it to take part in lighting the big tree in Veterans Park.

There was live entertainment from a lighted stage, some free food and drinks, bleachers for people to sit on and plenty of room for children to run and play.

Chattahoochee Fuller Center Project (CFCP) Director Kim Roberts had the honor of lighting the tree. City officials extended the honor to her and Assistant Director Robin Pierre due in large measure to a very busy year the CFCP has had in Lanett in 2022. In June, two new senior homes were built and a tiny house located in Plant City. In October, a Fuller Center Legacy Build saw two new homes go up on North 12th Avenue in the Jackson Heights neighborhood. This brought the CFCP’s total of new homes built in the Chattahoochee Valley to 75. Tentative plans are to build five more homes in the region next year to extend the total to 80.

A senior duplex will be built here in the Valley and three homes will be going up in Opelika, where a significant amount of money has been pledged to a Fuller Center build.

Opelika Mayor Gary Fuller is a cousin of the late Millard Fuller, founder of Habitat for Humanity and the Fuller Center for Housing.

The program began with the Lanett High JROTC honor guard presenting the colors and the playing of a recorded version of the national anthem. The Rev. Jeff Clevenger of the Lanett Church of Christ delivered the invocation.

Mayor Jamie Heard and members of the city council went to the stage to wish everyone a Merry Christmas. In the spirit of the evening, Council Member Tifton Dobbs sang the opening line of Donny Hathaway’s classic holiday song “This Christmas”:

“Hang all the mistletoe, I’m gonna get to know you better This Christmas.”

The program underscored a growing Hispanic presence in the city. Two of the entertainment acts, the Santa Maria Choir and the Trana and Verde Family, performed such songs as the Jose Feliciano classic Feliz Navidad.

They did a fine version of “Silent Night” in Spanish and got everyone in a lively mood when they closed with “Feliz Navidad.”

The Tran and Verde families live in Lanett and have children attending W.O. Lance Elementary School. Two of them won new bikes in the annual raffle. The families are originally from Honduras and Nicaragua.

They were dressed as elves in red and green outfits and danced while making hand gestures to Spanish language Christmas songs, including of course, Feliz Navidad.

The choir from a local Seventh Day Adventist Church performed a song in the Spanish language, and their minister did a short sermon in both English and Spanish.

The choir from Greenwood Missionary Baptist Church stole the show. Their heartfelt songs were delivered with lots of energy and harmony and got everyone in a festive mood.

“I just got here from Atlanta, where I never won anything,” she said.

Heard concluded the program by wishing everyone a safe and happy Christmas season.

“It rained on us last year,” he said. “I’m glad we had better weather this year.”

Carl Harper was serving his ever-popular chicken and steak wraps. It’s almost as much fun to watch him make it as it does to eat one of his incredibly good wraps.

City employees were on the playground and offered bottled water, hot apple cider, hot dogs and popcorn to the crowd.