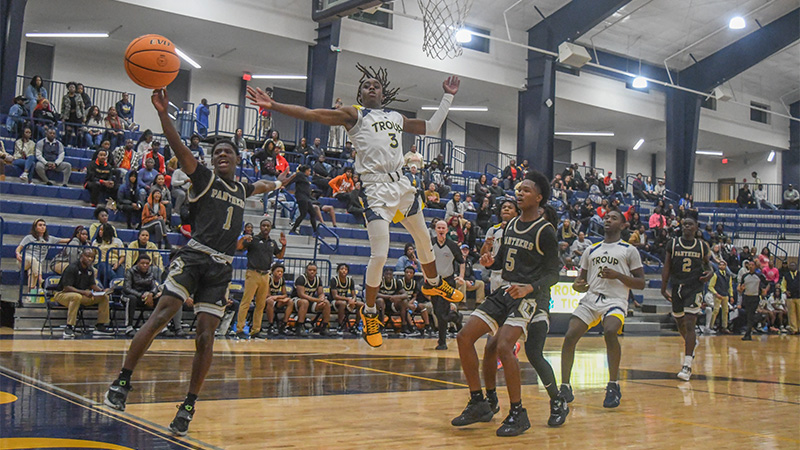 The Troup boys basketball team is gathering some momentum after beating Lanett 50-47 on Monday night.

“This is a resilient team even though we are so young,” Troup coach Jairo Gay said. “I have four freshmen playing big minutes, but these guys know how to play basketball, and they know how to fight.”

The Tigers got off to a hot start and took a 17-12 lead after the first quarter, but the Panthers kept fighting and chipped into the lead in the second before tying the game at 28 heading into the break.

“We’re going to be some fighters this season,” Lanett coach Trentavious McCants said. “They are young, and I was a little worried how we would react when we faced adversity. They fought hard all night and I’m proud of them.”

Troup weathered the storm as the game stayed deadlocked through the third quarter as defense reigned. The fourth quarter was the deciding eight minutes with the game tied at 37 heading to the fourth.

The Tigers were 9-for-10 on free throws in the fourth quarter including Dejaylen Campbell sinking two free throws with under 10 seconds left to give Troup a three point lead.

“He’s growing up and becoming a leader,” Gay said. “He stays focused in practice, and I’m proud of him for buying in.”

Desmon Cunningham of Troup and Nakia Bynum battled it out down the stretch of the game. Bynum finished with a game high 19 points including eight in the fourth quarter. Cunningham was third on the Tigers with 10 points.

Cunningham and Campbell had to step up after their leading scorer on the season, Deo’Vion Tucker, fouled out of the game in the fourth quarter.

“They had to step up when Tucker fouled out,” Gay said. “I told Campbell this is your chance to be a leader and put the team on his back and propel us to a win and he stepped up to the challenge.”

Tucker was second on the team on the night with 11 points while Jalen Brown led the way with 15 points.

The Panthers are just getting their season started as it was their opening game of the season. Coming off a final four appearance last season, Lanett is inserting some younger guys into the lineup and will be looking to make another deep run this season.

“I have a young group right now,” McCants said. “They are still learning the game of basketball. They know how to fight and that’s what we did tonight.”

Lanett falls to 0-1 to start the season. The Panthers will be back on the court at Handley on Thursday.

The Tigers have clutched out two narrow victories after losing their opening two of the games of the season to go 2-2.

“We have already reached half of the win total the guys had last year, so this is a good feeling for the guys, to win against a tough Greenville team and then a really tough Lanett team that was 19-4 shows we have something and hopefully we can begin a winning streak,” Gay said.

It is a long season but Troup is starting to gather some momentum under its first year head coach.

“It doesn’t come as a surprise,” Gay said. “I’ve seen the fight in this team since day one. I know it will take some time to start really clicking, but I feel like we are in a good place. We have a mountain of a challenge tomorrow night.”