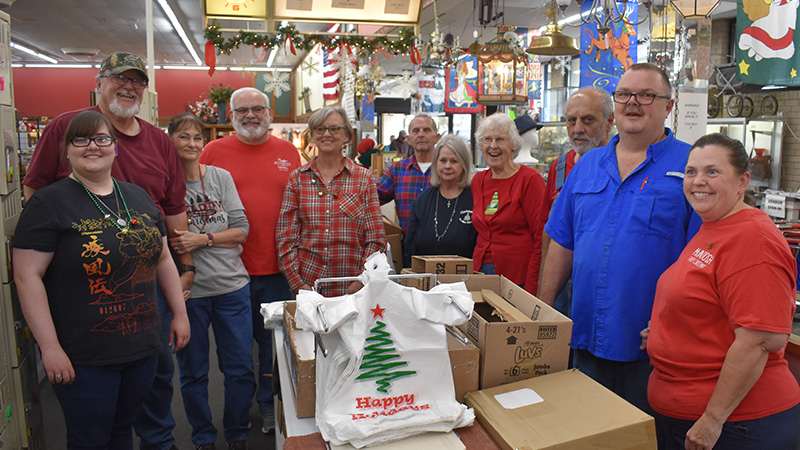 VALLEY — Timeless Antiques and Flea Mall was a very busy place on Saturday. Owner Carol Fulcomer was hosting her annual Christmas open house. Both local people and out-of-state travelers on I-85 stopped to browse among more than 135 vendor booths scattered throughout the 30,000-square-foot store building. Guests were treated to free punch and cookies upon their arrival. There’s a guest book at the front desk where visitors are asked to sign. People from as far away as Nova Scotia and California have recently added their names to the growing list. The big book has the names and favorable comments from people from all over the world.

Once during a summer rainstorm some bikers stopped to take a break under the shelter in front of the store. Some of the vendors went outside to strike up a conversation with them and were told they were from Fulcomer’s hometown of Medina, New York.

Fulcomer has two grown daughters and several grandchildren. One of those families still lives in Medina and the other in Mississippi.

Fulcomer has an office just inside the front entrance to Timeless Antiques. She’s always accompanied by her dog Lizzy, a German shepherd mix that looks a lot like her two previous dogs, Snuffy and Too. Snuffy was a Charpei mix and when she died, her friends were able to locate another dog that looked much like Snuffy. She was quickly named Snuffy Too and eventually just Too.

Vendor Gayle Daughtrey is active in rescuing animals and located both Too and Lizzie. One had been abandoned in a park on West Point Lake and another from a dog pound in Franklin.

Daughtrey may have also found a home for Sugar, the dog that rode on the Timeless Antiques float in the recent Valleywide Christmas Parade. Daughter held the dog in her arms throughout the parade.

Someone read about Sugar in The Valley Times-News Christmas parade story and has expressed interest in taking her in.

The large red “Merry Christmas” wagon that carried Fulcomer, Daughtrey and other Timeless Antiques vendors in the recent parade is now parked outside the store, welcoming visitors during the Christmas season.

Daughtrey likes the way Lizzie has taken to her master. “Whenever Miss Carol goes somewhere, Lizzie follows her and jumps up in the truck to ride with her,” she said. “She loves to go riding.”

Fulcomer wants it known that Timeless Antiques and Flea Mall is a pet friendly store. “Everyone is welcome to come by often,” she said. “We have over 135 vendor booths and displays. New merchandise is coming in almost daily.”

CHRISTMAS OPEN HOUSE — Timeless Antiques and Flea Mall had its annual Christmas Open House this past Saturday. It was open from 10 a.m. till 7 p.m., and people came from all over to check out what was there at an estimated 135 vendor booths and displays. Shown above from left are some of the vendors. From left, are Amy Heatherly, Mike and Kathy Smith, Jack and Cathy Wright, Earl and Shelia Bryant, owner Carol Fulcomer, Anthony James and Al and Gayle Daughtrey.