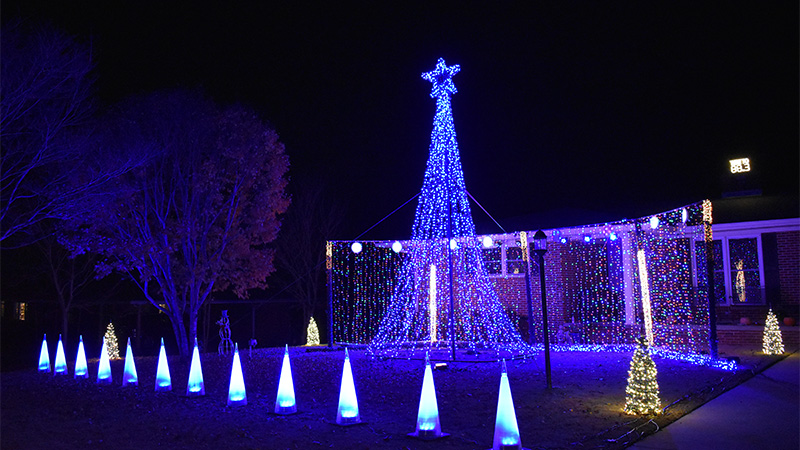 The families of Valley will be mesmerized once again by the Christmas Light Show put on by the McCain family on 26th Avenue, which started Thursday night. This year’s display will feature almost 30 songs and intelligent fixtures for the neighborhood to enjoy.

Ruslan McCain, an electrical engineer for the US Corps of Engineers, said he decided to do the display again after receiving warm support from the community. His motivation for continuing the tradition every year comes from his desire to help create lasting holiday memories for children.

“This is a free show, and I feel like it’s like giving back to the community in a way that is unique,” McCain said. “You’re not necessarily going outside and picking up trash, but you’re providing a service to the community during a holiday that is important to a lot of people.”

McCain and his family have been setting up the light show since 2016. He became inspired by the Christmas lights in his neighborhood and the light shows he saw in other towns growing up.

“The first year I did the show, it was very limited on a very small budget. I got a lot of good feedback. And over the years I just added to the show,” McCain said. “What keeps me going is just the feedback from the community. People would stop and tell my parents that they enjoyed the show.”

McCain said that he wasn’t sure whether he would continue to do the light show this year. However, after receiving such positive feedback, he was glad to bring it back to the community. He hopes that everyone will come by and enjoy the free show.

“My favorite part is just knowing that when people do stop, I put a smile on their face, just for even a moment,” McCain said. “Sometimes some stuff comes up and you’re like, ‘Man, why did I do this?’ But just thinking about how happy and excited people get, that’s what I enjoy.”

McCain began the prep work for the light show in November with the help of his parents, Tim and Cherie McCain, and sister, Leah McCain. He said that the light show is a team effort and that he couldn’t have completed it without his family.

Once everything was in place, McCain took over to handle the more sophisticated work. A lot of planning went into the lights and props, McCain said. However, over the years, the prep work has decreased thanks to the preplanning of the year before.

“Using my electrical background also keeps my brain fresh,” McCain said. “Things always come up and you have to, use a little engineering so you can come up with a quick solution because once you start the process in November, you only have a month to get it going.”

McCain added new songs this year, so the show is now over an hour and a half long. McCain said that he likes to have variety so that when families return, they can have a fresh experience. He added that he hoped it would also keep children engaged.

This year, the display will feature intelligent fixtures. The fixtures will use a lot less cords and a lot more lights, according to McCain. It will also create a sharper image with more precise colors.

“When I want a certain mood to happen in the show, it can bring that mood out a lot clearer,” McCain said. “I don’t have to spend a lot of time getting to that certain color that I want. I can just program it.”

Because the intelligent fixtures are sensitive to weather, McCain will schedule the show around the rain.

Though he’s unsure how long he will continue the light show in Valley, McCain always encourages others to continue the tradition and decorate for Christmas.

“I encourage a lot of people to decorate because kids really look forward to riding around and seeing them,” McCain said. “If I could tell you anything, it would be to at least put something out to show a community that celebrates Christmas and the excitement that they have for it through their lights.”