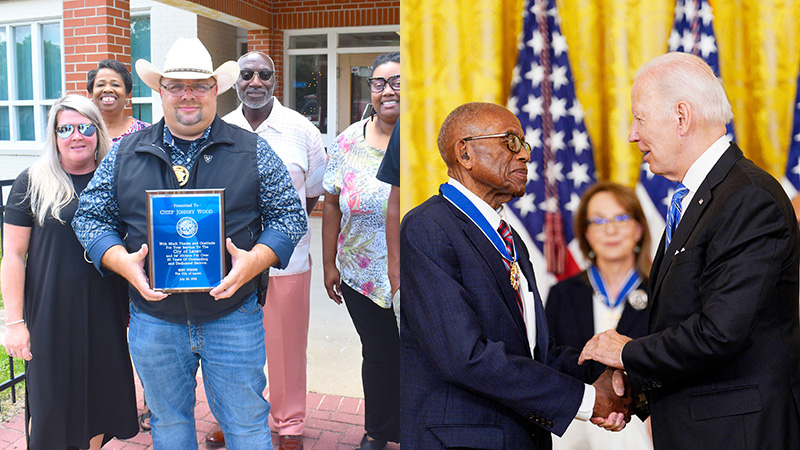 EDITOR’S NOTE: This is the third part in a four-part series reviewing the year 2022.

A courtroom in Opelika was packed as community members spoke up about the Chambers County School District’s consolidation plan. The plan has continued to be tweaked — and is still awaiting federal approval after a site in Valley was chosen by CCSD — but this hearing in late June was the next step in the process.

Lanett Police Chief Johnny Wood announced he was retiring after 25 years serving the city of Lanett. He retired on July 29. He’d been police chief since 2018. A retirement lunch was held for Wood at the end of July.

Ronnie Tucker was sworn in as the newest Lanett City Council member, succeeding Charles Looser, who had resigned because he was moving.

Civil Rights attorney Fred Gray was presented with the Medal of Freedom by President Joe Biden on July 7. Gray, still an active attorney in his 90s, was one of the first African American members of the Alabama Legislature after Reconstruction.

The Lanett City Council expressed concern over the job Amwaste was doing as the city’s waste management collector. The city has since bid out its trash services.

The Fallen Hero Memorial Honor Ride for Deputy J’Mar Abel saw a large participation as 130 vehicles participated in the 42-mile event. Abel, a Chambers County deputy, was killed when assisting in a vehicle pursuit.

Both the cities of LaFayette and Valley offered land to the Chambers County Board of Education for possible development of a consolidated high school. Ultimately, months later, the Valley site was chosen, but that decision still needs federal approval.

The Lanett City Council appointed Richard Casner as its interim police chief at the city council meeting in July. Casner took over for Johnny Wood, who was retiring.

David Anthony Pike pled guilty to murder of Calvin Lee Irvin in 1985 and was sentenced to 240 months. Pike was located in Puerto Rico in 2019 after decades.

Suspect in I-85 shootings taken into custody in LaFayette

A man involved in three separate shootings on Interstate 85 — in Auburn, Montgomery and LaGrange — was arrested in LaFayette. The suspect was 39-year-old Jerel Raphael Brown of Montgomery.

Chambers County School District hosted the first of two town hall meetings on the new school site in September, the next step of the consolidation process. Meetings were held in both LaFayette and Valley. Ultimately, the Valley site was chosen, pending federal approval.

The City of Valley has ultimately chosen to move away from Amwaste as its trash collection partner, but that all began in September when the company was underbid by two firms. One of those was C&C Sanitation, which won the bid.

Valley Police Department Officer Lawrence Howell was recognized as the Alabama Narcotics Officer of the Year. In the past year, Howell had arrested 84 people on a total of 117 charges, bringing in over $7500, 1500 grams of marijuana and 1200 grams of methamphetamine.

Kevin Carter, who was named the interim police chief for the West Point Police Department, discussed his vision for the police department. Carter has been with the WPPD since 2010.