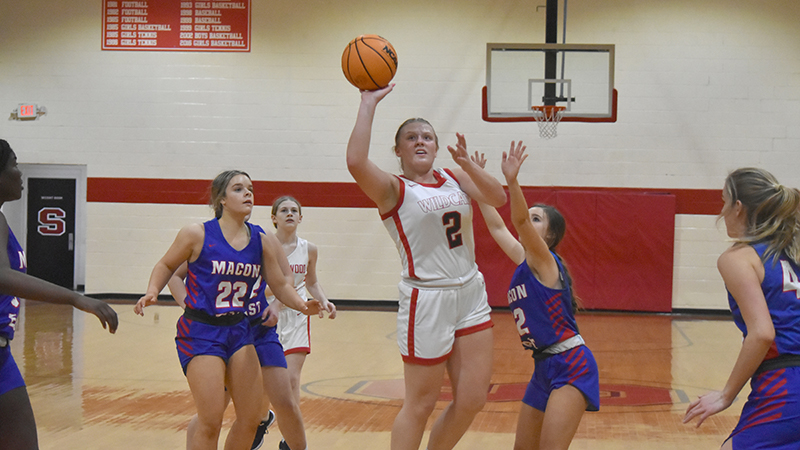 It wasn’t the prettiest game, but the Springwood varsity girls overcame injuries and a slow first half to defeat Macon East 46-42 in a key area game on Tuesday.

The Lady Wildcats were without star Tori Patillo, who suffered an undisclosed injury.

Despite being down a key player, Springwood’s EJ Matthews helped lead the Lady Wildcats back to a win with 14 points.

Springwood head coach Lisa Sampson was pleased with how her girls fought through adversity.

“This was the first game without Tori, and these girls were emotional,” Sampson said.

“They had a really good practice yesterday. They really committed themselves to working as hard as they can. I was thrilled they got the win because they all worked together. It was a good one,” Sampson said.

Sampson was thrilled with how EJ Matthews stepped up as a leader.

“She was very uncomfortable when they were manning up on her the last couple games,” Sampson said.

“I thought she really grew up tonight as far as handling the pressure and understanding with the ball in her hands.”

The Wildcats will host the area tournament on Feb. 2, and Sampson knows a win like this will give her team confidence.

“That’s a lot with these girls,” Sampson said.

“It’s just the confidence. They have to believe they can do anything they want to. They did that tonight.”

Springwood drops to 7-8 on the season, and the Lady Wildcats will play Glenwood on Jan. 31.