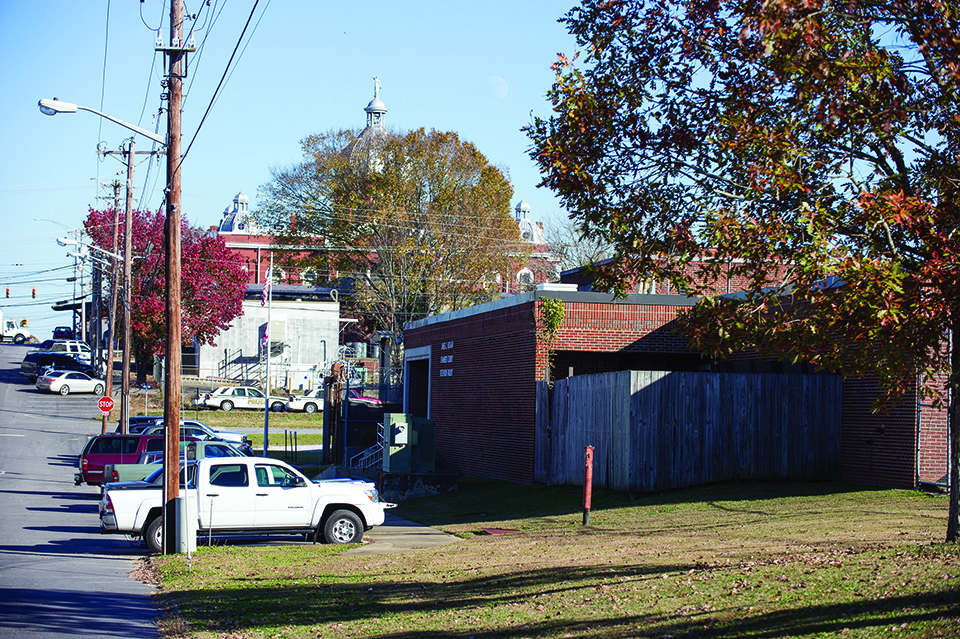 The James C. Morgan Chambers County Detention Facility is over capacity and has some plumbing and strucrual issues. Chambers County Sheriff Sid Lockhart is hoping the county commission will help him solve the overcrowding and other issues at the county jail. (Photo by Cliff Williams)

The rising inmate population is creating issues especially for the female population.

“When the jail was built, we did not have the female inmate issue,” Chambers County Sheriff Sid Lockhart said. “The female inmate population has been increasing with the number of drug crimes.”

Lockhart said currently it is difficult to segregate the female population.

Lockhart is hoping the Chambers County Commission will help with the issue.

“Nobody wants to spend tax payer money on jails,” Lockhart said. “But at some point you have to.”

Lockhart added then new pods would create space that would lead to renovating the existing jail due to “internal structural issues and bad leaks.”

He explained some of the leaks are in the floor beneath the concrete and that the new pods would handle many of the inmates while a renovation was ongoing but not all.

“We will have to get other counties to help us house the higher security inmates while the renovation of the old jail takes place,” Lockhart said.

With the new pods and a renovation of the jail, Lockhart said the jail would be able to accommodate over 200 inmates.

The issue is being discussed amongst members of the Chambers County Commission.

“The county commission is talking about it, but it has not been taken on,” Chambers County Manager Regina Chambers said. “But there is no time frame in place.”

“It is something we are working on,” Commission Chair Charlie Williams said. “Nothing has been decided.”

Dequavious Demand Cobb, Daron Mikel Dafney and Travis Terrell Fielder are in the jail for murder and other charges from the October shooting incident and deaths at Club Addiction in Lanett.

Tra-Shaniq Lashay Burley of Lagrange is awaiting trial from a Sept. 5, 2016 incident. She is being held on $200,000 bond for capital murder robbery and capital murder burglary. She entered a plea of not guilty Oct. 19, 2017.

In the same incident, Cordamione Decornez Cameron of Lagrange is being held on a $200,000 bond for the same charges. He is due in front of Judge Tom Young Jan. 11, 2018 for a hearing.

Stacey Demar Gray of Tallassee is being held for a July 4, 2015 offense date where he is charged with capital murder, and two counts of capital murder rape/sodomy. The district attorney has filed motions seeking the death penalty and the case is currently waiting forensics to come back.

Amber Nicole Hancock and Casey Scott Smith are awaiting trial for a March 3, 2016 incident where they are charged with capital murder burglary and capital murder robbery in the death of John Keith Smith. They are being held on no bond. Hancock has entered a plea of not guilty and Smith is due before Judge Tom Young Jan. 11, 2018 for a hearing.

Larry Bradford Moore is being held for the death of Lorena Dawn Leasure where court records reveal Leasure was shot by Moore in an automobile.

Raeshon Kivontrea Williams of Lanett is being held for capital murder and aggravated child abuse in the Feb. 2017 death of a two-year old girl. The case was bound over to the grand jury by District Court Judge M. Calvin Milford Jr. April 13, 2017.

Jwuan Key Sharpe of Valley is being held for the August 2, 2013 kidnapping and death of Marlena Burns. He was indicted Jan. 29, 2014 and Mark Howard Carlton was just appointed as new council  in May. The state has filed motions seeking the death penalty.