Company portrays war as a nightmare 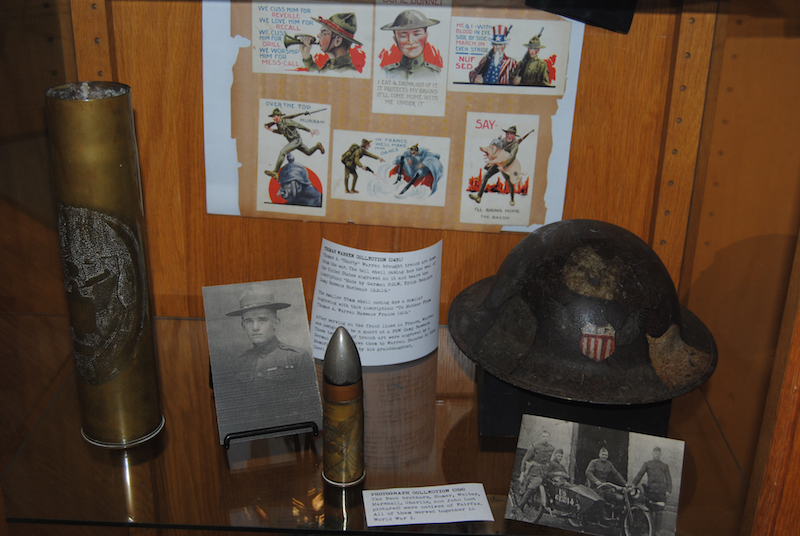 VALLEY — Bradshaw-Chambers County Library Lunch ’N Learn speaker Dr. Bert Hitchcock this past Friday drew a contrast in how people on the home front and soldiers on the battlefield saw World War I.

Those safe from harm on U.S. soil may have seen it as a patriotic adventure and a noble cause eloquently expressed by President Woodrow Wilson in his call to make the world safe for democracy. The soldiers on the front line saw it as a seeming  repetition of pain, heartbreak, blood, mud and death, losing friends and wondering if you’d ever make it out alive.

These two views, said Dr. Hitchcock, were well expressed by two noted writers, both born in Mobile in the nineteenth century.

Mary Raymond Shipman Andrews (1860-1936) was a nationally known writer when she wrote about the Great War being a challenge to manhood and a glorious opportunity for the United States to stand up for what right.

Mobile area native William Edward Campbell (1893-1954) also wrote for magazines, under the pen name William March. His work became wildly popular in the 1930s, especially among veterans of the Great War. It came  during a period when the writer was having bouts with depression and flashbacks to some of the awful events he’d witnessed.

Andrews gained fame as a writer in New York City. Many of her works, including both prose and poetry, were published by the leading magazines of the day in the early 1900s. He best known work, “The Perfect Tribute,” first appeared in Scribner’s in July 1906. It depicts Abraham Lincoln writing and delivering the Gettysburg Address, and then being disappointed with himself, considering it to be a big failure. That all changes when he happened to have a chance meeting with a wounded Confederate captain in a prison hospital.

The captain did not recognize him but said in passing that the president had made one of the greatest speeches on the site of the Gettysburg battlefield.

The story became wildly popular. Some historians believe that  it contributed to the popular myth that Lincoln had written the speech hurriedly on a train en route to Gettysburg.

“His war was not the glorious adventure Mary Shipman Andrews wrote about,” Dr. Hitchcock said. “Through his characters, he wrote of his own true feelings of the war.”

He wrote of the men of Company K, but later said he wanted his works to represent every company in the war, not just one. He once talked of taking his  stories and putting them on a wheel, making it spin faster and faster, creating a picture of war as an endless circle of pain.

In a 1932 interview, March said that his attitude toward war was that we needed to do everything in our power to prevent it, but if it did break out he’d join the military and fight.

March had grown up poor in southwest Alabama. “His father made a living as a timber cruiser, and he didn’t have the chance to finish high school,” Dr. Hitchcock said. “He left home at 16 to work at a law firm in Mobile. In 1916, he moved to New York City  and found work as a subpoena server.”

The next year, the U.S. joined the war effort and March volunteered, joining the U.S. Marines. He fought with distinction, earning the French Croix de Guerre, the U.S. Distinguished Service Cross and the Navy Cross.

He returned to work in a Manhattan law office after the war and later embarked on a successful business career. He started writing short stories in the late 1920s with some of his works being included in The Best American Short Stories. He won awards for his writing in 1930, 1931 and 1932. He had some 20 stories published in all, four of them vignettes that were included in his first novel Company K, which was published in 1933.

After the war, March spoke many times of an incident in which he sought shelter in a bomb crater only to find a German soldier already there. He quickly bayoneted him, an action he later came to regret. Many doubt the authenticity of the account, but something  much like it appears in one of his stories.

March’s biographer, Roy Simmonds, wrote of “the two worlds of William March,” that he tended to mix reality with a vivid imagination, telling supposed historical anecdotes that may not have been true.

His success as a writer gave him the opportunity to travel to Europe. In Hamburg, he witnessed the rise of Adolf Hitler and Nazi Germany. This caused him great distress, something that’s evident in ”Personal Letter,” which expressed anxiety over the political future of the world.

The psychological problems that started in Germany worsened in London, where he became a patient of psychoanalyst Edward Glover.

He returned to the U.S. in 1937 to become a full-time writer. He reprinted stories about Company K and in 1943 published the novel The Looking Glass, a work Dr. Hitchcock considers March’s greatest literary accomplishment.

His best-known work, “Bad Seed,” was published the year he died in 1954. The book was a best seller and  has gone on to much success on stage and in film.

Dr. Hitchcock compared March’s Company K novel to William Faulkner’s As I Lay Dying. “It’s a fragmented collection of separate vignettes,” he said. “It’s 250 pages in length with 113 sections, each attributed to a different member of Company K.”

Each  separate story is around nine of ten pages in length. “March pulls no punches,” Dr. Hitchcock said. “There are frightened, disillusioned soldiers and incompetent, arrogant officers who are sometimes killed by their own men.”

One soldier in Company K wrote a letter to the parents of a young man who had been killed in action. Instead of saying the normal things like he had been a hero and died bravely for his country, he told them the truth – that he’d been mortally  wounded amid the blood, mud and unbelievable stench of a battlefield and had lingered for hours in terrible pain before dying.

“I can only tell your about Company K,” Dr. Hitchcock said. “You will have to experience it for yourself. The best I can say is that  William March’s war was not Mary Shipman Andrews’ war.”

A native of Demopolis, Ala., Dr. Hitchcock holds degrees from Auburn University, the University of Oregon and Duke University. He also attended the University of Melbourne in Australia.  He was a faculty member in the English Department at Auburn for close to 40 years. During his tenure he taught everything from freshman composition to graduate doctoral courses. His specialty is American literature.