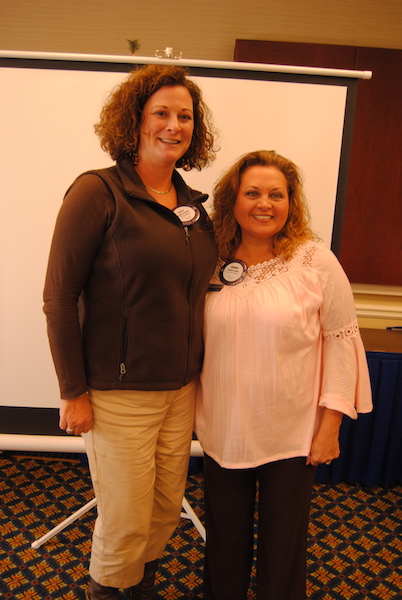 Chambers County Superintendent of Education (at left) talked about puzzles and brain teasers at the November 16th meeting of the West Point Rotary Club. She is shown above with Club President Debbie Kelley. (Photo by Wayne Clark)

LANETT — Chambers County Superintendent of Education Dr. Kelli Hodge made a confession to fellow members of the West Point Rotary Club at last Thursday’s noon hour meeting at the Hampton Inn & Suites. She’s a nerd from a family of nerds.

“We talk about math and science problems a lot,” she said. “We like to discuss brain teasers and puzzles.”

Dr. Hodge said the third week in November is a special time for anyone who has a bit of nerd in them. “It’s National Games and Puzzles Week,” she said.

With that, members of the club were in for a fun meeting. She passed out some candy with appropriate names like Smarties and Dum Dums and asked everyone to put on their thinking caps to see if they could figure out some word games and brain teasers she had for them.

First, she held up some flash cards with single words on them as clues. The trick was to see how fast the reader could figure out meanings such as tickled pink (the clue was the color pink, of course), small talk (the word “talk” was very small on the card), sideshow (with show appearing vertical rather than horizontal) and travel overseas (with the word “travel” appearing over a row of the letter c).

To those who could decipher the meaning quickly, Dr. Hodge told them, “You must be a nerd like me.”

One of the brain teasers went this way: A man starts running very fast in one direction, then abruptly turns left and continues to run fast for a the same distance, then makes another left for the same distance and then makes a  third left turn and at the end of the run meets to masked men. Who are they? Answer: an umpire and a catcher. The man was playing baseball.

“What words are pronounced differently if the first word is capitalized?” she asked. Answer: Job (the Biblical character) and job, Polish and polish, and Herb and herb.

Dr. Hodge held up a piece of paper with three rows of three dots. She passed out copies of it and asked members of the club to connect all those dots without taking a pencil off the paper and without crossing any line you’d drawn. The trick to this brain teaser is to work outside the box.