Givorns thankful for show of support 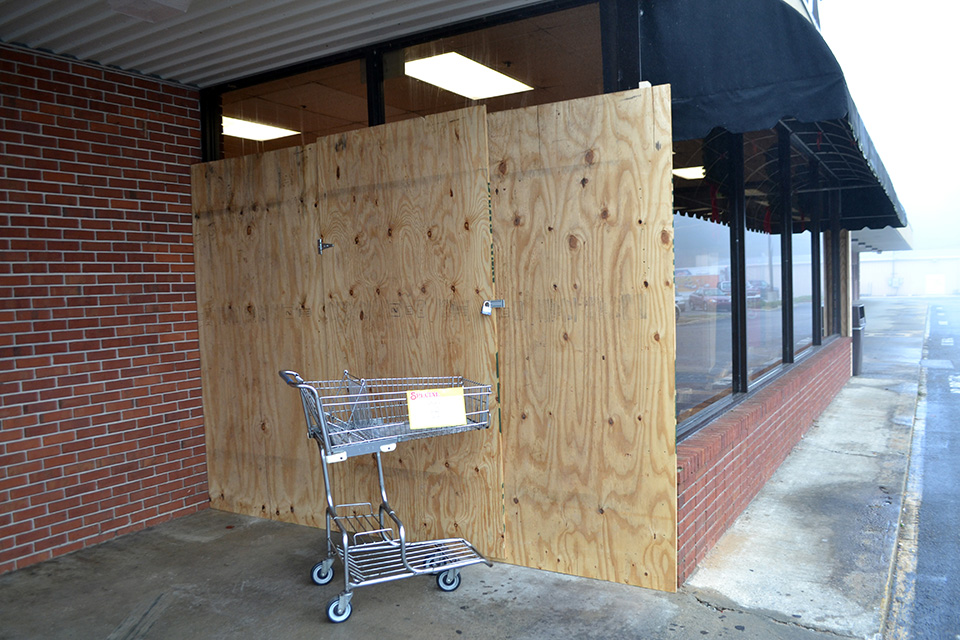 Work is ongoing with the repairs to the entrance to Givorns Foods in Valley following an early morning robbery where two suspoects drove a truck into the stroe’s foyer and stole an ATM machine. Shown is the left side entrance currently being blocked by a plywood door. The business has received a large show of support from the community since the incident.. (Photo by Steven Thomas)

VALLEY — In the wake of a daring morning robbery, the people at Givorns Foods are taking strength from their community.

Early on Nov. 21, two suspects drove a 1999 Dodge Ram into the front of the store and stole an ATM machine. The vehicle severely damaged the buildings glass foyer, as well as several items located around the entrance.

Shelvie Givorns, who has been in the grocery business for nearly 50 years, recalled the morning of the incident.

She recalled a display of sodas, over 400 drinks, that had been smashed, spewing cola everywhere.

“The [cola] syrup was everywhere.”

Danny Crosby added that there was also structural damage. “Each column beside the doors are damaged and have to be taken down.”

Givorns also noted a brick wall had several new cracks in it.

Despite the significant amount of damage, however, the store was ready to open at 7 a.m.

“We had no doors but we opened!” Givorns said with a laugh.

When customers started showing up that morning, many wondered if the building was being remodeled.

With a smile, Givorns described the kindness given to everyone that worked there, saying many wondered who would do that to the store.

One customer in particular, a small child that Givorns described seeing video of, proclaimed to his mother, “That’s my store! Look what they did to my store!”

When his mother questioned what he meant, the boy stated that because they shop at Givorns all the time it was his store.

Crosby said the sentiment was held by everyone, noting several customers told him they took the theft personally.

“That meant a lot to us,” he said, with Givorns adding that the incident didn’t hurt business one bit. “That says a lot.”

As far as repairs go, Crosby said the hope is that everything will be completed by Christmas.

After that, the company is looking at additions to possibly prevent anything similar from occurring in the future.

“We’ve had a couple of conversations about things to do but we haven’t made any decisions yet,” Crosby said. “We’ll probably do a little more research on that but we do feel like we need to do something.”

Both Crosby and Givorns agreed they wanted to keep the building looking as much like it did before the incident.

“Over the years the community, and the whole town, has supported us and I’m very thankful for that,” Givorns said, adding she was also thankful that no one was hurt. “It wasn’t done while employees were here. That would have been the worst thing.”

The Givorns family has been in the grocery business for nearly 50 years, building locations in West Point, Ga., and Valley. The Valley store was built in 1989.