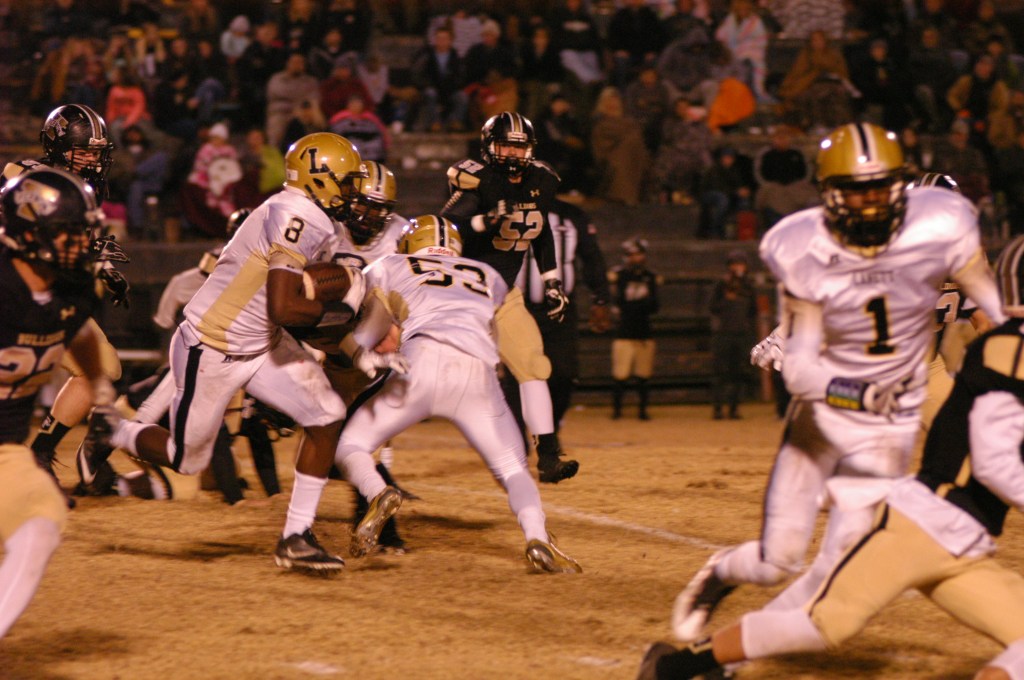 VERNON, Ala. — The door of opportunity cracked open for the Lanett Panthers in Lamar County this past Friday night. Two major events took place. First, Coach Clifford Story’ team stayed on point in their drive for a state title by demolishing the Lamar County Bulldogs, 48-7, and second, defending state champion and No. 1 rated Fyffe was defeated by Sulligent High, 35-28, just ten miles up the road.

This puts Lanett in the driver’s seat to win the 2A state title at Bryant-Denny Stadium in Tuscaloosa on December 5, First they have to get past giant killer Sulligent at Morgan-Washburn Stadium this coming Friday. The game promises to be a shootout between two pass happy teams, and the Panthers need a big crowd there to cheer them on. A win on Friday puts them in the state championship game.

Lanett has had a lot of good teams since Alabama has had a playoff format, starting in the late 1960s. The Panthers have gone to the playoffs many times, but there was always someone really, really good they couldn’t get past. For the past several years that team has been Fyffe. Now they are out. There’s a crack in that door. All that’s left is for the Panthers to kick it in.

In Friday’s game, Lanett continued their onslaught against 2A opposition, being unstoppable on offense and unmovable on defense.

The team rolled up 415 yards in offense and with Secretary of Defense Baraskious “Boo Rock” Dowdell continuing to be a man among boys, the Panthers totally shut down the Lamar County offense. Sophomore quarterback Kristian “Ken Ken” Story completed 6 of 12 passes for 108 yards passing and a touchdown and ran the ball 7 times for 112 yards and two more scores. Running back Jawon Howell had one of his better games of the season, running the ball nine times for 113 yards and a touchdown. The Panthers rolled up over 300 yards on the ground against the hapless Bulldogs. Terrion “Ty” Truitt ran it seven times for 36 yards, Kaleb Thomas ran it twice for 19 yards, ninth grader Austin Moody carried it two times for 10 yards, Zion Lynch twice for seven yards and Todricus “Ta Ta” Askew had a short TD run late in the game.

On defense, the Boo Rock man was all over the field, having 12 tackles, a sack, one caused fumble, a fumble recovery and a batted down pass. He’s been a major disruptive force all year. Lamar County was the latest team to find no way of stopping him. Dowdell had plenty of help in frustrating the home team. Linebackers Braylon Harrington and Juwon Howell each had eight tackles, and defensive back Trikweze Bridges had a major impact on the game with eight tackles, a pick six and a forced fumble. He also had a big game on offense, hauling in three passes for 35 yards. Harrington came up big on offense as well, coming up with a 33-yard TD grab. Senior defensive back Jaren Ross had one of his best games for Lanett with four tackles, an interception and a caused fumble. Lanett’s defense has racked up some amazing stats this season. As a team, they have 36 interceptions and 46 sacks.

It’s no wonder they’re 13-0. With any kind of offense at all, they should be killing people. An, by the way, their offense is pretty darn good. The quarterback has 35 touchdown passes.

The Panthers took care of business on Friday, rolling up a 27-0 halftime lead and building on it in the second half. The Bulldogs thrilled a huge home crowd by having a big return on the opening kickoff, Mark Duncan ran it back all the way to the Lanett 40 to put the Bulldog offense in great shape to start the game.

On the first play of the series, Story kept the ball off the left side of the line and raced across midfield to the Bulldog 41. Three plays later he lofted a pass toward the back of the end zone. It looked like it was going to be overthrown, but six-foot-six wide out Anquaevious “Long” Pollard stretched out those long legs of his and ran it down, making a beautiful catch then looping past the goal post to celebrate with some hip bumping with teammates in the right corner of the end zone. Rovilan Castro’s extra point gave Lanett a 7-0 lead with 8:43 showing in the opening period.

On their next possession, the Bulldogs drove it across midfield before the big-play Lanett defense stopped them once again. A sack by Keavis Sands put them in a third and seventeen situation. The Panther defense made another big play on fourth and seven when D’terrion Glaze sacked quarterback T.J. Estridge for a big loss. The home team was bailed out when Lanett was flagged for a facemask penalty on the play. That gave them a first down, but that’s when Boo Rock made his presence known, first by throwing running back Mark Duncan for a ten-yard loss and then, on fourth and 11, batting a pass back to the quarterback, who made the mistake of catching it and being swarmed by a host of Lanett defenders on the 50.

Lanett’s offense took over in good field position and quickly made the end zone for their second score of the game. Story kept around right end to the Bulldog 23 to get things rolling, and on the next play, Juwan Howell took a handoff off the right side of the line and ran over and around people down to the one-yard line.On the next play Story kept the ball off the right side for the score. The right side of Lanett’s line just wiped out people on that series. The PAT failed, leaving Lanett’s lead at 13-0 with 1:40 left in the opening period of play.

It wouldn’t stay there for long. On the first play of the next series, Estridge made the mistake of throwing the ball toward a five-foot-ten receiver on Trikweze Bridges’ side of the field. The 6-5 defensive back anticipated the play perfectly, intercepted the ball near the left sideline and raced 45 yards for Lanett’s third score of the game. Castro’s extra point extended Lanett’s lead to 20-0 with 46.9 seconds left in the first quarter.

The Bulldogs moved the ball past midfield on their next series, before the Lanett defense came up with another big play. Lamar County left the ball on the ground, and Boo Rock rocked them once again by outfighting everyone for the ball. Lanett took over on the Bulldog 45, and it would take them just one play to put up more points. Story took a deep drop looking to pass. Seeing on one open, he took off running down the left sideline and outraced everyone to the end zone. The 45-yard run fattened Lanett’s lead to 26-0. Castro’s PAT made it 27-0 with 9:46 left to play before halftime.

There was no more scoring in the first half, but Lanett came close on a couple of plays. Pollard was open on a deep pass and may have scored a touchdown on a well-thrown pass from Story, but was pulled down by a defender inside the 10 as he was making a break the ball. In a close game that probably would have been pass interference, The home team got some charity in the form of a non call.

The Bulldogs came to life early in the third quarter and threatened to make a game of it. They got a break with an underthrown pass by Story was intercepted and returned to the Lanett 28. From there, they got what would be their only score of the game when Estridge found tight end M.J. Duke wide open down the middle for a TD. The extra point made it 27-7 with 10:46 left in the quarter.

Things appeared to be going Lamar County’s way when they recovered an onside kick. Another quick score and it’s 27-14 and a ball game. The big home crowd was really into it for the first time in the game. Those hopes were dashed when Jaren Ross made one of his biggest plays of the season, intercepting the ball on the sideline at the Lanett 30.

Lanett’s offense then went 70 yards, with runs by Howell accounting for most of the yardage. From the Lamar County 33, the Panthers went back to the passing game with Lanett finding their tight end, Braylon Harrington wide open down the middle. Story fired him a perfect pass, Harrington hauled it in and made some terrific moves to avoid defenders on his way to the end zone. Castro’s PAT made it 34-7 with 7:44 left in the period.

That pretty much took the fight out of the home team. On a fourth-and-three play on their next possession, Lanett stopped them when Dowdell, Dee Dobbs and Kaleb Thomas teamed up to stop their running back short of the first down. After an exchange of possessions, the Panther offense was rolling again, this time powered by running back Jawon Howell.

From the Lanett 31, Howell blasted off the right side of the line and showing great determination simply would not go down. He ran past and over people all the way to the Bulldog one-yard line. He scored off right guard on the next play to build the lead to 40-7. Castro’s PAT made it 41-7 with 3:55 left in the period.

Lanett’s coaching staff cleared the bench and played lots of reserves in the final period. The second teamers put one more score on the board in the game’s waning minutes. Junior running back Todricus “Ta Ta” Askew ran it in from six yards out to complete a 56-yard drive. Castro’s PAT made it 48-7 with 4:32 left in the game.

On the final series of the game, Lamar County moved the ball against Lanett’s back up players to around the 20-yard line before the final seconds ticked off the clock. Lanett went to 13-0 with the win and advances to a fourth-round game at home versus Sulligent. The game promises to be a shootout with the winner advancing to the 2A state championship game the following week in Tuscaloosa.