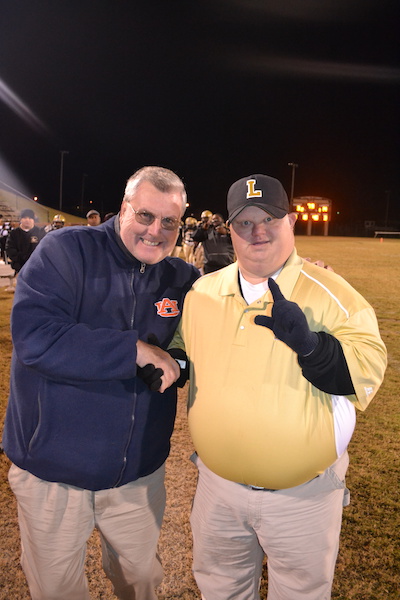 LANETT — Buoyed by spectacular games from sophomore quarterback Kristian “Ken Ken” Story and senior wide receiver Terrion “Ty” Truitt, the Lanett Panthers ran their record to 12-0 on the season with a 41-16 drubbing of the Sand Rock Wildcats Friday night at Morgan-Washburn Stadium.

Story completed 10 of 20 passes for 169 yards and three TD with no interceptions.He ran the ball six times for 77 yards, completing the game with close to 250 yards in total offense. He now has 33 touchdown passes for the season.

Truitt was a major difference maker in the game. He ran the ball 10 times for 158 yards and three scores. He also caught two passes for 43 yards and had a 44-yard kick return.

Also having big games on offense were Trikweze Bridges, who caught six passes for 102 yards and two TDs and Braylon Harrington, who caught a 20-yard TD pass.

On defense, 6-2, 250-pound senior defensive end Baraskious “Boo Rock” Dowdell had a monster game, being a disruputive force all night long. Fans in the Lanett crowd were shouting “Boo Rock! Boo Rock!” as he made dominating play after dominating play. Six-foot-seven defensive end Tifton “Dee” Dobbs made one of the biggest plays of the game, intercepting a fourth down pass to stop a Sand Rock desperation drive late in the game. ON the play, the big guy looked more like a basketball player (which he is) going up for a rebound and snaring it away from much smaller defenders.

The second-round playoff game advances Lanett to a third-round game on the road. They will be making the long trip to Vernon, Ala. game for a game with Lamar County, a 17-7 victor over Ranburne last Friday.

Lanett did not have an easy game by any means. Sand Rock came into he game with a 9-2 record and was one of the better teams Lanett went up against all season. The took the fight to the Panthers and gave them fits for much of the game until Lanett took control in the second half. The visitors took the opening possession of the game and marched it down the field, mostly on running plays between the tackles, and had it first-and-goal on the three before Lanett’s defense rose up to stop them, forcing a short field goal. Carson Carver’s 22-yard boot was good, giving the Wildcats a 3-0 lead with 6:45 left in the first quarter.

On the first Lanett possession, it was obvious Sand Rock was going to have trouble containing Lanett’s speed. The Panthers drive the ball 70 yards in just four plays, getting their first score on a 13-yard by Truitt. Rovilan Castro’s extra point gave Lanett a 7-3 lead with 5:18 left in the period. After an exchange of possessions, the Panther offense was rolling again, this time scoring in only five plays. From the Sand Rock 20, Story found tight end Braylon Harrington wide open down the middle and connected with him on a 20-yard TD pass. Castro’s extra point extended Lanett’s lead to 14-3 with 48 seconds left in the first quarter.

The Wildcats moved for a couple of first downs on the next possession, before Boo Rock “rocked the Rock” by crashing through the line and tackling a running back for a five-yard loss just as the quarterback was handing it to him. The dominating play let loose a chorus of “Boo Rock! Boo Rock!” from the Lanett stands and appeared to stun the entire Sand Rock team. A couple of plays later, they punted on fourth and 20. There wasn’t enough time left on the clock for Lanett to mount a drive. The half ended with Lanett holding a 14-3 lead.

The Panther offense was in high gear in the second half. On their first possession, they drove it inside the Sand Rock 20 before losing it on a fumble at the 18. The visitors could’t do anything with it and punted on fourth and seven.

They made the mistake of making low, line-drive kick right to Lanett’s No. 2, who went to his left to the home sideline and ran some 44 yards to the Sand Rock 18 before being brought down. With that big return, the Panthers had the ball right back where it was when they fumbled it away on a bad exchange.

After a run by Story to the Wildcat 11, Truitt took a handoff around right end and outraced everyone to the end zone for Lanett’s third TD of the game. Castro’s PAT made it 21-3 with 7:49 left in the quarter. Lanett hurt themselves with an unsportsmanlike conduct call following the PAT. This forced them to kick off deep on their end of he field.

Sand Rock returned the kickoff past midfield. This gave them great field position, and they had their first TD-drive of the game. Lanett’s defense hung tough inside the five, but on a fourth and goal play from the two, the Wildcats scored on a pass from quarterback Jansen Alexander to Brett Lawless. Carver’s PAT narrowed the gap to 21-10 Lanett’s favor with 1:16 left in the third.

It was Lanett’s turn to get some good field position following the kickoff when Sand Rock’s onside attempt went out of bounds on the Lanett 45. Lanett drove it 55 yards for a score, having to overcome major distance penalties for holding and offensive pass interference along the way. Big plays in the drive included runs by Truitt and Story and passes from Story to Bridges. When Truitt scored on a 15-yard run around left end, Lanett fans groaned when another flag hit the ground. While many were thinking “What are they going to call this time?” the ref signaled it was against the Wildcats for hitting out of bounds after the score. Castro’s PAT made it 28-10 with 10:49 left in the game.

The Wildcats were still in it and had plenty of fight. They moved for a couple of first downs on their next possessions before turned out the lights for good with a big defensive play. Sand Rock went for it on fourth and two from their side of the 50. They wanted to throw a pass in the left flat was all over the play. They had a tremendous rush on the play, and with defensive tackle D’terrion Glaze wrapping up the quarterback and bringing him down, the Sand Rock signal caller hurled the ball underhanded to the left side of the field. When there’s a six-foot-seven guy over their around some six-foot guys who do you think its going to get it? Dee Dobbs, who will be the starting center on Lanett’s basketball team this year, looked like a man among midgets when he went up and snagged it and ran it back to the Sand Rock 32. Unfortunately, he was injured on the play and missed the rest of the game. He was down for several minutes but walked off the field under his own power.

The Panther offense then went for the kill. It wouldn’t take them long to get another score. Story found Bridges on a go route to the east end zone. The six-foot-five receiver caught it on the dead run just across the goal line. That made it 34-10 with 7:22 left in the game.

It stayed that way when Lanett couldn’t get off the PAT try because of a bad snap. The visitors managed a consolation score on their next possession, taking advantage of a long kickoff return. They ran it back to the Panther 35 and scored a few plays later on a 10-yard pass from Alexander to Lawless. A failed try for two points left the score 34-16 with 5:42 left in the game.

The Panthers would get one more score following another monster play from the Boo Rock guy. On a first down play from their 26, the Sand Rock quarterback was having trouble with a low snap while in a shotgun formation. Dowdell was in on him in a flash and just flat out took the ball away from him. From there, the Panthers got a first-and-goal on a run by Truitt to the Sand Rock seven.

A couple of plays later, Lanett got their final score on a five-yard pass from Story to Bridges, who made a sensational catch, extending his long frame to grab the ball and getting both feet in bounds just inside the end zone. Both officials watching the play immediately signaled touchdown. One said to the other one, “Now that was purtty!” Castro was true on his PAT, extending the score to 41-16 with 54.4 seconds left.