A pair of really nice Christmases 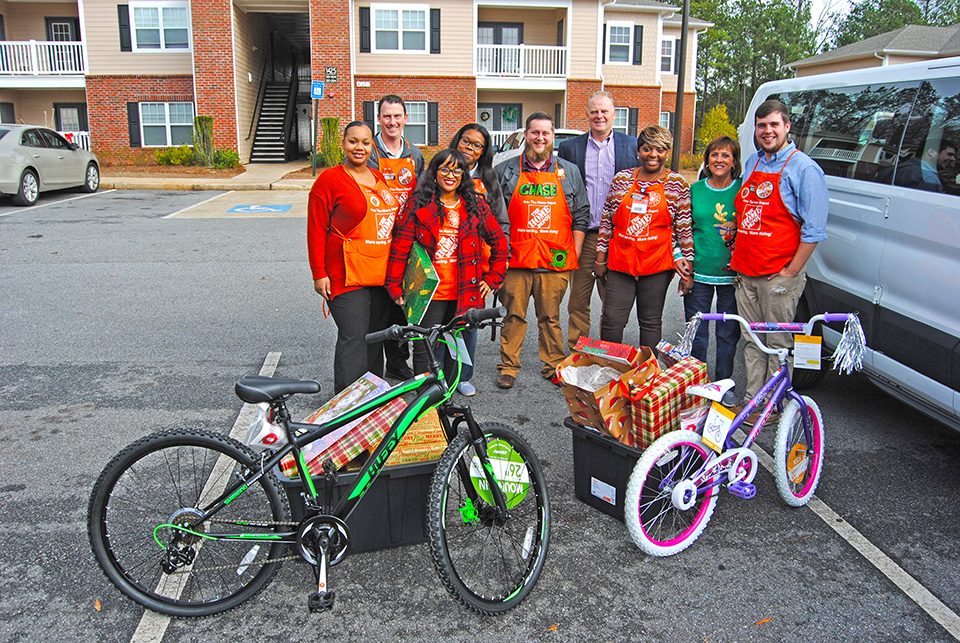 SOME HELP FROM HOME DEPOT – West Point resident Jessica Spence and her two children got an unexpected visit from Santa Claus on Thursday. Rather than a big guy in a red and white suit, this kind of “Santa” was a group of people in orange and white. Jessica and her two children are among four Troup County families getting assistance this Christmas season from employees of Home Depot of LaGrange. In front, at left, are Britney Bussey and Amanda Brown; in back, l-r, are Chris Snyder, Chiquita Thompson. Chase Hughes, Brenda Spratling and Joshua Hood. West Point Mayor Steve Tramell and CFCP Executive Director Kim Roberts were there to greet them. (Photo by Wayne Clark)

WEST POINT — Two families living a couple of blocks apart will have really nice Christmases this year thanks to some assistance on their behalf from the Chattahoochee Fuller Center Project (CFCP).

At 1 p.m. on Thursday afternoon, Forest Mill Apartments resident Jessica Spence received a boys’ and a girls’ bicycle and two large boxes filled with such items as an Easy Bake oven, clothes, make-up, a basketball, a football, and a toy truck. The orange- and white-clad team members of Home Depot of LaGrange pitched in to buy these items out of their own pockets.

Home Depot of LaGrange has been a long-time supporter of the CFCP, and when Executive Director Kim Roberts asked them if they could help a family in West Point, the orange and white team was more than willing to do so.

The tree in the Spence apartment has an ample amount of toys underneath it. Mom’s problem now is to keep everything gift wrapped until Christmas morning.

Ms. Spence was overwhelmed by the surprise visit on Friday. When she answered the door and saw the orange and white delegation outside she could hardly speak.

“We are blessed beyond measure to be at your home today to bring some special Christmas cheer,” said Assistant Store Manager Joshua Hood.

“Thank you, Home Depot, for all of this,” he said when he saw Jessica’s reaction.

Inside the apartment are two framed photos of young U.S. Marines. They are Jessica’s brothers who are serving in the military.

“I am a single mother, and it’s so hard to make a living while raising two children,” said Jessica. “This will be the best Christmas we have ever had. I can’t thank you enough.”

Jessica is the mother of an 11-year-old boy, Justice, and a nine-year-old girl, Ah’rya. Both are very active in the West Point Recreation Department youth sports programs.

Jessica and her two children are one of four Troup County families adopted by the orange and white team this Christmas season. One family recommended for assistance by the American Red Cross, lost all their possessions in a recent house fire in LaGrange.

Another family being helped is currently in a bad situation due to domestic violence. They are currently staying in a shelter. The Troup County Department of Family and Children’s Services recommended a fourth family to be helped this Christmas season.

“Thank you, Home Depot, for what you do for our community,” said Roberts. “We love you all.”

At 2 p.m. Thursday afternoon, Roberts was a couple of blocks away on Frank Hall Jr. Street dedicating CFCP Home No. 38 for Ruthshun Hall and her three young daughters. They will have a really nice Christmas this year in their new home.

A gathering outside the home included officials from the Fuller Center for Housing, Americus, Ga. and a large number of employees of EAMC-Lanier  Hospital. They did the lion’s share of the work in getting the home built.

“What an honor it is for me to be here today,” said Roberts. “Ruthshun, God has blessed you and your family.”

“They dried in the house in just two days,” she said. “EAMC people from Valley and Opelika came here to work in some miserable weather and did such a great job.”

Mayor Tramell, who also served as a house captain for the build, thanked everyone for coming together to get it done.

“I really enjoyed working with everyone,” he said. “This house, and the one next door, are beautiful additions to our community. I just hope we can keep the ball rolling with what’s being done. This was a labor of love for me.”

“We learn new things every time we do this,” he said. “Sometimes we get off to too fast a start and other times it’s too  slow. This one went just right.”

Johnson thanked volunteers from New Birth Ministries who helped with the project.

“It’s a community thing,” he said. “We love doing this, and want to do as much of it as we can. Three months from now we will be doing it  again in Valley.”

EAMC-Lanier engineer Charles Bishop  said he had been thrilled to be a part of the house build. “What makes it more special is that one of our employees will be living here.”

Ruthshun works in the hospital’s cafeteria area. Prior to moving in the new home, Ruthshun and her three daughters had been living in public housing.

The dedication ceremony concluded with Roberts giving Ruthshun the key to the new home and Matthew Thrower, pastor of Refuge Point Church, giving her a Bible. The group gathered outside the house responded with some loud cheering.

From West Point, the CFCP will go next to Valley, where some home building will be done off Huguley Road not far from W.F. Burns Middle School. Three new homes were built in that area in September 2016.