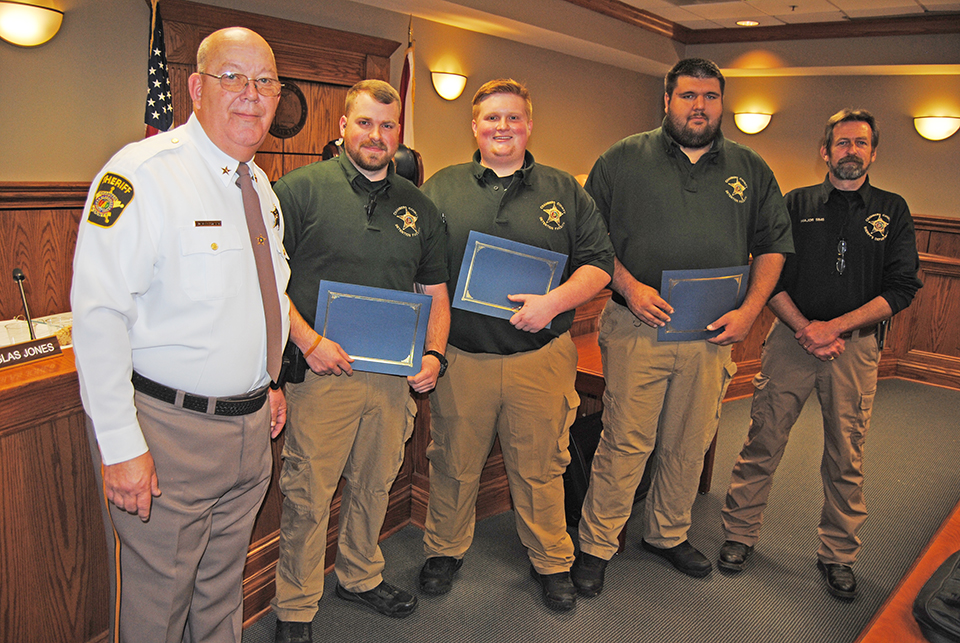 OFFICERS RECOGNIZED — Three officers with the Chambers County Sheriff’s Department have been recognized for being among only 100 officers in the state to have completed all four required classes in the Alabama Jail Training Academy (AJTA) this year. Sheriff Sid Lockhart (left) and Lt. Thomas Sims (right) presented them certificates and lapel pins at Monday’s meeting of the Chambers County Commission. The officers include, from left, David Burroughs, Zackery Christian and Eric Horne. (Photo by Wayne Clark)

Three deputies, David Burroughs, Zackary Christian and Eric Horne were presented certificates in appreciation of their graduation from the Alabama Jail Training Academy.

So far this year, more than 300 county corrections officers throughout Alabama have gotten training through the Academy and around 100 officers have completed all four required classes and have received basic certification in the program.

Burroughs, Christian and Horne are in that elite group and have received certification from the National Institute of Jail Operations (NIJO).

Jeannie Gaines, public relations officer with the Association of County Commissions of Alabama (ACCA) encourages county commissions to recognize the achievements of such officers as a means of getting more officers to participate in this important  educational program.

In addition to the certificates of completion, officers Burroughs, Christian and Horne each received a lapel pin they can wear on their uniform.

An officer who’s served the CCSO for 25 years was presented a plaque of appreciation by Sheriff Sid Lockhart. Capt. Robert Finley is retiring after completing a quarter-century of service in Chambers County. He also served as the mayor of LaFayette during that stretch.

“We will forever appreciate your service to the county and wish you well in retirement,” the plaque reads.

Capt. Finley thanked the commission for its long-time support of the county’s law enforcement officers and the Sheriff’s Office.

“You have provided us everything we have needed,” he said.”You work together well as a group and that’s good.”

Finley said he could remember a time 25 years ago when local radio announcer Terrell Whaley mocked the commission meetings as “the Ross and Doss show,” for the manner Commissioners Ross Dunn and Doss Leak dominated the conversation.

In business at Monday’s session, the commission backed a recommendation made by County Attorney Skip McCoy to vacate a portion of LaFayette Street in the Fairfax community. The street is located in the Fairfax Mill industrial park and is not used for traffic. It will be to the advantage of the new East Alabama fire station that the street is closed so that they can have better access to the community.

The commission approved a resolution recommended by County Manager Regina Chambers to participate in the ACCG’s liability self-insurance fund.