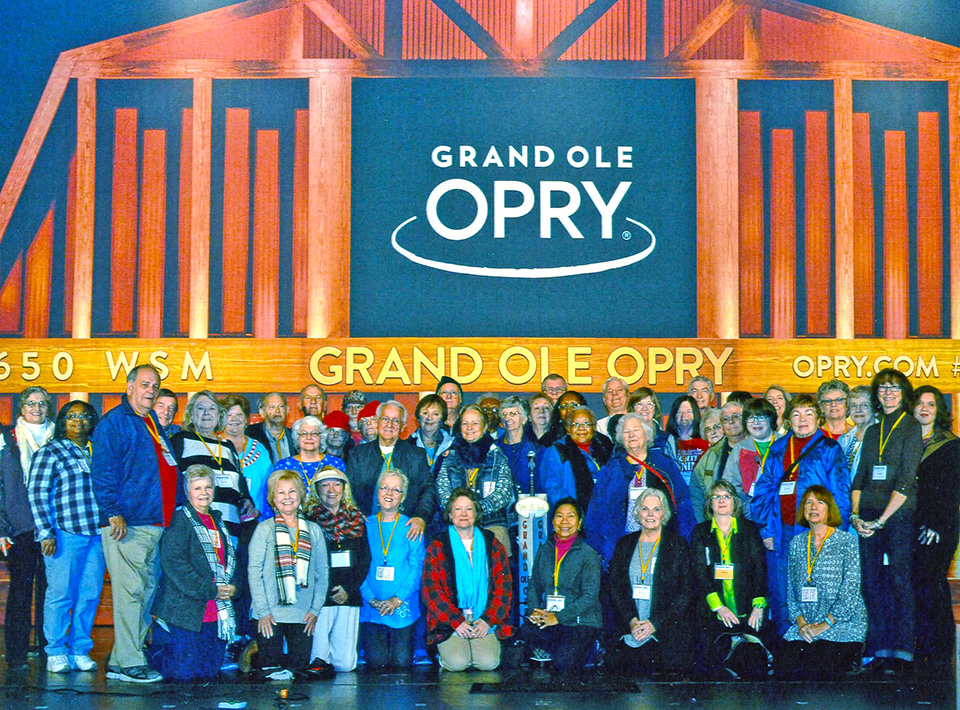 VALLEY — The Chambers County Library Travelers recently traveled to Nashville, Tenn., seeing many of the sights including the Country Museum Hall of Fame, the Johnny Cash Museum and the Belle Meade Plantation.

The group of 48 left Dec. 4  for a five day/four night trip with Diamond Tour Group.

“It was a good learning experience,” said Ashley Tipler. “We toured Nashville for a week from morning until early evening.”

At lunch the tour traveled to downtown Nashville where they enjoyed a performance at  the Grand Ole Opry at the Ryman Auditorium hosted by Whispering Bill Anderson. Other performers included The Whites, Mandy Barnett, Exile, Sundance Head, and Connie Smith.

The Ryman tour concluded with an opportunity to stand on the stage and sing. Tour member Jimmy Fincher was the only one to do this.

Fincher added that while there wasn’t an audience to hear him, he sang “Tennessee Border No. 2.”

On finishing up, Fincher said he can now say he sung at the Grand Ole Opry.

“It was awesome to stand there where all those singers performed. I’m still waiting on my [music] contract in the mail,” he said with a laugh.

The next day started with a tour of the Grand Ole Opry House where, Hamilton noted, a backstage tour gave the group access to the Opry’s post office where anyone can send a letter to any current Opry member.

The day also included a tour of the Country Music Hall of Fame where Tipler said her favorite thing was seeing one of Elvis’ favorite cars.

They ended the day with a tour of the Johnny Cash Museum.

The third day featured a guided tour of Nashville that included stops at the Centennial and Bicentennial Parks.

It was at Centennial Park when the group toured a replica of The Parthenon built for the 1897 Tennessee Centennial Exposition. The site includes a 42-foot re-creation of Athena.

At the Bicentennial Capitol Mall State Park, the group arrived in time to hear the 95 bell carillon play the Tennessee Waltz and the Chattanooga Choo-Choo.

The group also viewed the 200 foot granite map of the state of Tennessee.

A special moment was the viewing of the World War II Memorial as the tour took place on Dec. 7, the anniversary of the bombing of Pearl Harbor.

The last scheduled event that day was dinner and a show at the Nashville Nightlife Dinner Theatre.

The show featured fiddle player Tigar Bell who began touring with Merle Haggard at age eight; up and coming twenty one year old Zach Janson; and the comedy of Steve Hall and his puppet partner Shotgun Red who appeared on “Nashville Now” and “Hee Haw.”

The trip back was also eventful.

The group boarded the bus on Friday morning to return home but ran into a snow storm just outside of Tennessee. The driver contacted the tour company and the group was directed to pull off in Ringgold, Ga., for lunch at a Cracker Barrel while they found accommodations for the night.

“Diamond Tours had us turn around and head back north where we spent an extra night at in Tennessee at the company’s expense,” Bradshaw Library Director Mary Hamilton said.

“Dot and Gerald Brumbeloe and Jimmy and Susie Fincher walked across the four lane road to a Food City grocery store and purchased enough lunchmeat, bread, chips, drinks, plates and napkins to feed everyone in the group. So, we had an impromptu meal in the lobby of the hotel.

Luckily, we had brought along some board and card games. A serious game of Monopoly was played along with a competitive game of Rook.”

The group boarded the bus one more time on Saturday morning to finally head back home. They arrived in Valley at 2:45 p.m.

Tipler and others said they would definitely go back to Nashville.

“I didn’t get to see everything,” she said.