Chattabrewchee looking to move into distribution 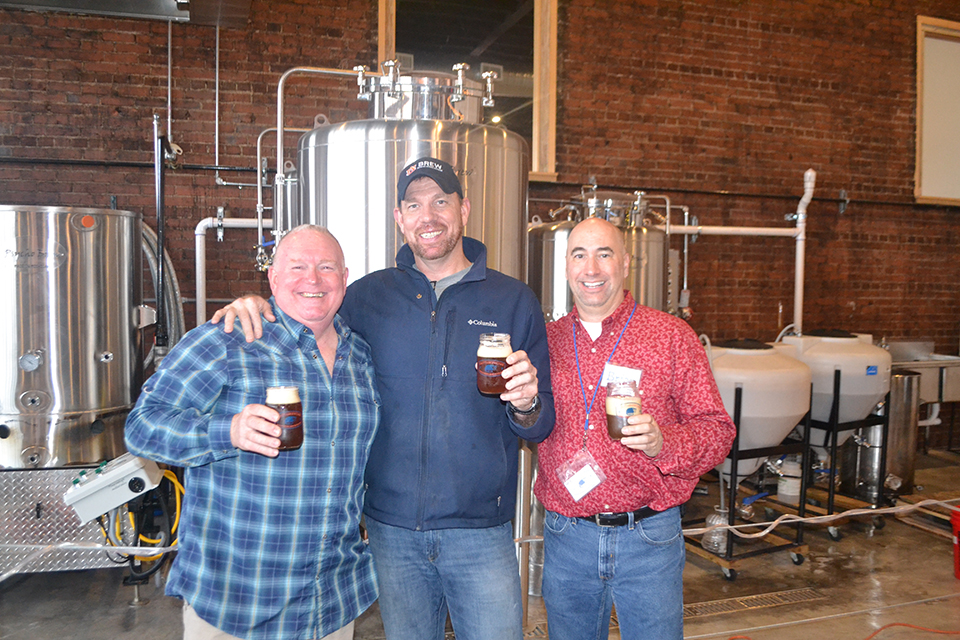 ‘IT’S BEEN A CHALLENGE’ — Chattabrewchee has been doing well since it opened a few months ago with plans to start distribution. From left are brewing and sales manages Barry Stephens, co-owner Mike Denehy and public relations manager Michael Dunne. (Photo by Steven Thomas)

Since opening in September, the business has thrived and now they are looking to expand.

“We’ve just started brewing on the main system, the seven-barrel system,” said co-owner Mike Denehy. “That mean we’re brewing for distribution with a focus on West Point and Columbus [Georgia].”

Beer and sales manager Barry Stephens said they would likely change out what’s available seasonally but at the moment they will have about four different beers available.

One is a New England-Style IPA called “Crow Hop” while another is a blonde beer called “Backwater Blonde.” As for the other two, Denehy and Stephens said they are going back-and-forth on which ones will be put out.

The community response has also been receptive.

“We’ve been pleasantly surprised with the amount of local support,” Denehy said. “We were really surprised by the number of people that travel from so far away.”

With a smile on his face, Denehy said most of the comments are, “It’s the best beet in Georgia!”

This amount of growth in such a short time might appear unusual but is actually in line with what they laid out when they opened.

“We’ve taken that exponential leap from a taproom to a distributing brewery,” Denehy said.

The future is also bright as far as locations go with plans to expand into Alabama and a second location in Georgia north of Atlanta.

Stephens added that many in the community have been asking them why they we not already selling to restaurants.

“We did that by plan,” he said. “Other breweries went into distribution first. We wanted to get this place open, create the buzz about the place and the beer, fine tune the recipes a little bit, get things dialed in and then worry about distribution.”

Chiming in, Denehy said they planned to stay focused on their main areas for the moment but if the demand for their product keeps increasing then they would have the increase production and distribution.

“Then we would move into other areas like Auburn and LaGrange. But we really believe if we focus on our hometown and lockdown those areas, we’re going to be pretty successful.”

Stephens noted that the recent changes to the law have allowed for much of their success, saying in the past if one wanted to visit a brewery it would be a few hours away.

“Today your local brewery is in your hometown,” he said. “Everybody is getting one.”

“We really want to focus on being a hometown beer,” Denehy said. “We consider success to own our hometown.”

Denehy also added Chattabrewchee has a few things that set it apart from other breweries.

It’s the only brewery in America owned by an active duty female, Denehy’s wife Kathy, and it’s is the only brewery within 500 miles with self-serve tap technology, which allows for different people to get the perfect sized drink for themselves.