Edwards gives away over 200 stockings 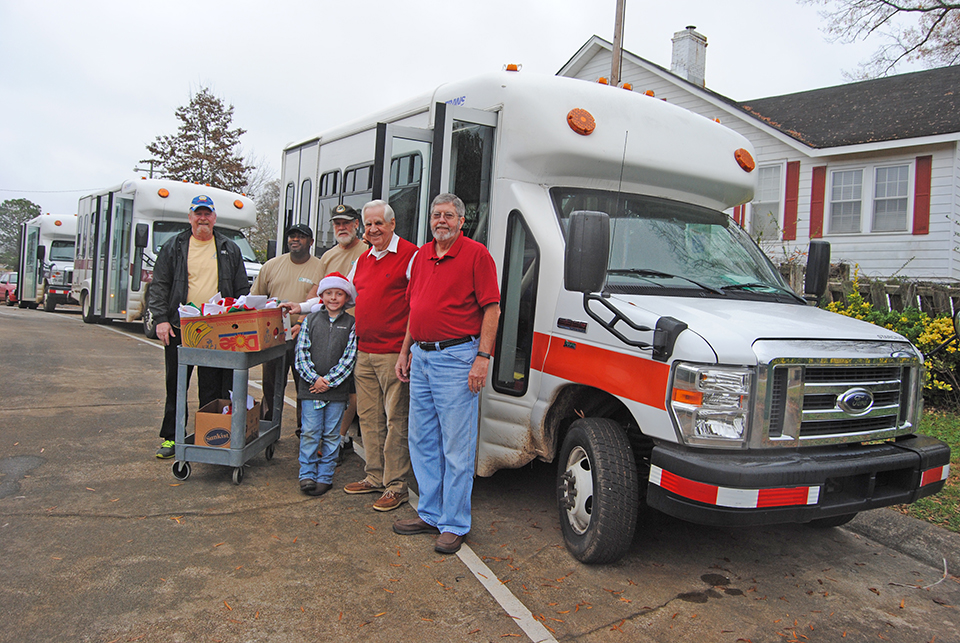 VALLEY —Ray and Jackie Edwards had their 25th Christmas Stocking visit to local senior centers this past week. They gave away just under 250 stockings filled with all sorts of goodies such as fruit, candy, small gifts and signed Christmas cards.

Mr. Edwards made stops at the Lanett Senior Center and Sylvia Word Manor toward the middle of the week and on Friday made the final stop at Valley Senior Center, where 38 seniors each received a big red and white stocking and 95 seniors had one delivered to their home. It was the final Christmas Stocking event at the current senior center in Valley.

“Next year we will be in the new center,” Edwards told the seniors to much applause. “That will be something special.”

Work is progressing rapidly on the expansion at Valley Community Center, where the new senior center will be located. The new center will be twice the size of the current one, and all the furnishings will be new.

Edwards thanked Mayor Leonard Riley and the current council for the commitment to build it.

“When I came off the council (in 2012), I asked Mayor Riley to follow through and build a new center for out seniors,” he said. “I’m really grateful he and the council have done that.”

Edwards told the seniors that he’d had some health problems during the past year and at one point was concerned that he might not be able to to a Christmas Stocking event this year. His health has improved a lot in recent weeks. With encouragement from great grandson Gavin Walden, his little Christmas elf, and the folks at Timeless Antiques, he was able to have one of his biggest giveaways to date.

“They did in half a day what it normally takes us three days to do,” he said, praising the Timeless Antiques volunteers for their ability to stuff stockings.

“I think we are really going to enjoy next Christmas in the new senior center,” he said.

State Rep. Isaac  Whorton said Valley and the surrounding area had gotten some very good news with the announcement that John Soules Foods would be opening a new plant in the area in 2018. “It’s a very, very good thing for our area,” he said to lots of applause.

Mayor Riley attributed the success in getting this major industry to come here was the end result of city officials, Chambers County commissioners and the Chambers County Development Authority (CCDA) working together in unison to accomplish a major goal. “The auto industry has been good for our area, but we want to diversify our industrial base,” the mayor said. “We don’t want to find ourselves in the same situation we were in when the textile mills shut down.”

John Soules Foods has purchased a 266,000-square-foot building off Towel Avenue in Valley that once served as a distribution center for WestPoint Stevens. In recent years it was the location of Kia supplier Daeil. Mando has a production area in the building at the present time but plans to relocate it to one of its larger plants in Opelika or in Meriwether County, Ga.

“They are planning a $110 million renovation and to put in a product line that will employ 200 people,” Riley said. “That could expand to three product lines within five years and a total employment of around 600 people, and they pay good. We don’t want what we had 10 years ago when unemployment was 22 percent.”

“The move-in date at the new senior center will be toward the end of March,” the mayor added. “Everything in the new center will be new. It will be really nice, and it will be there for you to enjoy.”

A total of 38 seniors ate Christmas dinner at the senior center on Friday. Three senior center buses left just past 10:30 a.m. to deliver a hot meal to 95 home-bound seniors.