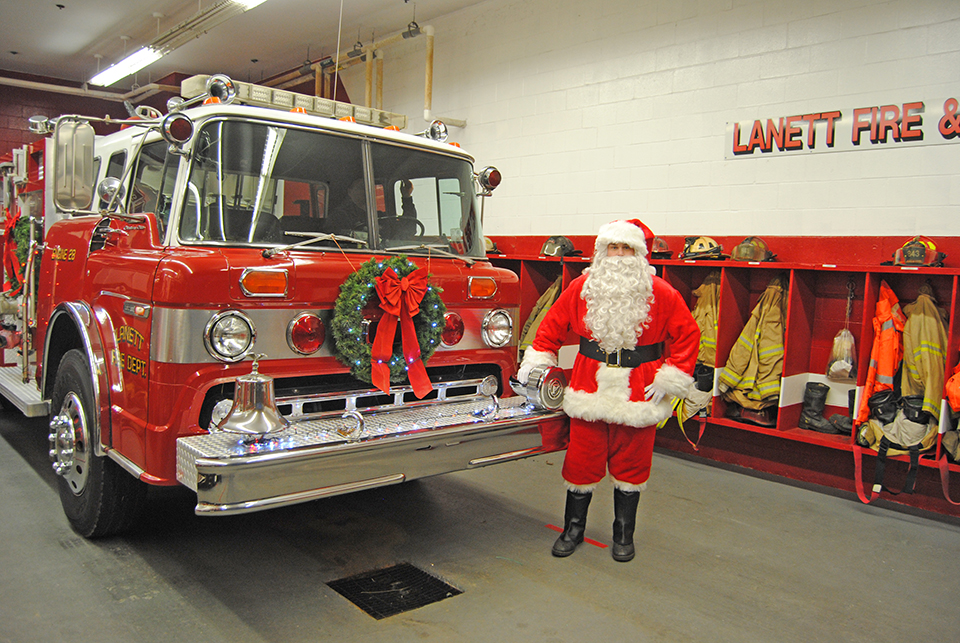 SANTA TRIP – On Sunday, Engine No. 28 made another trip throughout Lanett, carrying Santa Claus to all parts of town. It excites the children and gets a lot of shouts of approval from the adults. (Photo by Wayne Clark)

LANETT — For the past 15 years or so, local fire departments in West Point, Lanett and Valley have been doing something on Christmas Eve that not only thrills children throughout the local area, it’s something the adults get a kick out of as well.

It’s the day Santa Claus gets on the back of a fire truck and rides down every street in town, shouting “Ho! Ho! Ho!” and waving at everyone.

“It’s one of my favorite things we do every year,” said Lanett Fire & EMS Chief Johnny Allen. “The kids really love it, and the adults like it, too.”

Just before 6 p.m. on Sunday, Santa boarded the back of Engine No. 28 at the Lanett Fire Station and was off on another four-and-a-half hour tour of the city, smiling and waving all along the route.

Engine No. 28 is the antique of the Lanett fleet. It’s a 1986 model and has seen many an emergency call in its day. About the only thing it does these days is take Santa Claus around town.

Days in advance of its drive around town, firefighter/paramedics wash and wax it, making it look almost brand new for its big night.

LFD firefighter/paramedics have taken this Christmas Eve tour in all kinds of weather. Some years it rains, some years it’s bitterly cold, and the trip two years ago, on Christmas Eve 2015, was a day no one living in Lanett will ever forget.

It’s the day the bridges washed out.

The heavily-traveled bridge on Cherry Drive and the one at the foot of Thrill Hill were washed out. Two other bridges, one on North 12th Street and one on South 8th Avenue, were heavily damaged. This meant for detours for many weeks to come. It was inconvenient for a time, but the city ended up with some really nice bridges.

That was a rough day for Lanett firefighter/paramedics. Early in the day they spent time rescuing people from flooded cars and getting people to safety whose homes were in danger of flooding. By 6 p.m. that evening, Santa Claus began the annual tradition of going down every street in town, once again in familiar old No. 28.

The LFD was put to a supreme test that year and passed it will flying colors.

“If we could do it that year.” said Firefighter/Paramedic Jessica Tidwell. “It’s something that’s here to stay. It didn’t stop us. Santa rolled on.”