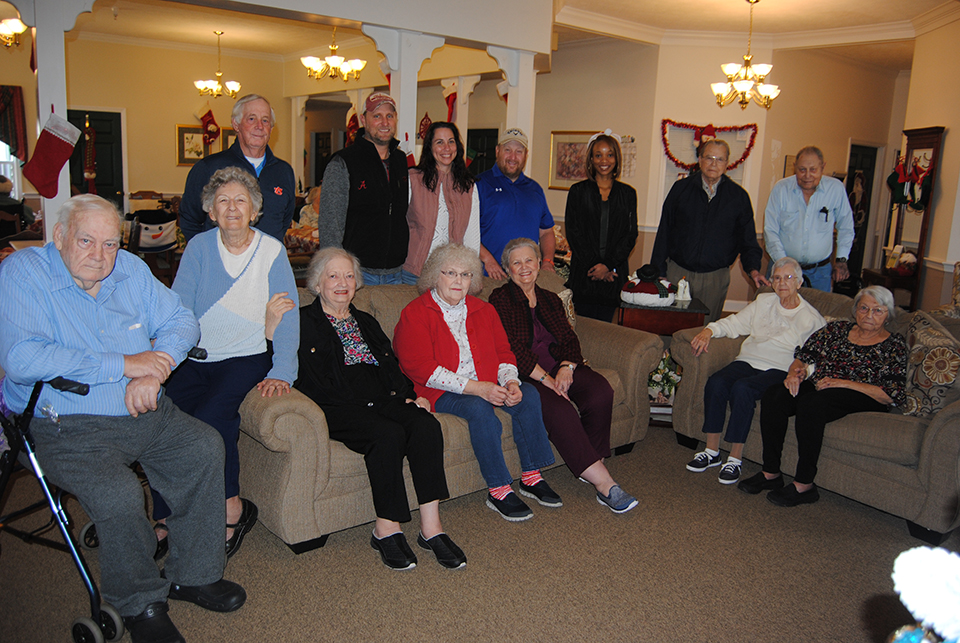 VALLEY — Local seniors in assisted living facilities and nursing homes had a joyous Christmas season in 2017. They had the chance to have Christmas dinner with family members, to listen to and sing along with visitors who came to sing Christmas carols.

Residents and family members enjoyed each other’s company and being by a beautifully decorated Christmas tree in the cafeteria area. A really good meal was served, and the residents drew numbers to receive gifts.

“It was fun,” said an EAMC-Lanier employee, “We all had a great time.”

The EAMC-Lanier Nursing Home has approximately 90 residents. One of them, Mildred Moore, celebrated her 104th birthday this past October.

Down the hill from EAMC-Lanier, in Valley Medical Park, the 25 residents of Valley Park Manor had a festive holiday season. Thursday, December 7th was family night with a special Christmas twist.

“We had a Christmas party, and had lots of people here,” said Activities Director Beverly Smith. “We had someone here dressed like Elvis, and he could really sing. He made all the ladies’ hearts beat a little faster. We also had a group of Girl Scouts who came to sing for us. We really appreciated having Leon Wessinger. James O’Steen and a men’s group come for a devotional program.

Valley Park Manor has had some stay growth since it opened in October 2016. Amber Griggs is the director.

The residents of Lakewood Senior Living, located on Fairfax Bypass in Valley, enjoyed a Christmas Day dinner with family members. The food was excellent, and everyone enjoyed the singing of Shambria Davis, who sang “O Holy Night,” “Jingle Bells” and “Rudolph the Red-Nosed Reindeer.” Shambria would start each song solo with everyone else joining in. By the time she finished, the whole building was singing with her and smiles were everywhere.

Lakewood resident James Smith has a relative who’s 101. Thelma Rogers of LaFayette is his daughter’s mother-in-law. She’s a published author, having written “Walk Beside Me.”

Diversicare of Lanett had a family get together just before Christmas. The dinner had the theme “A Chocolate and Gold Affair.” The food was as good as the name suggests, and everyone had a great time. It took place in two sessions, one at 5 p.m. and another six o’clock, and the parking lot outside the nursing home was absolutely filled.

A young lady led them in singing “Have Yourself a Merry Little Christmas,” a holiday classic written by Hugh Martin of Birmingham in the 1940s.