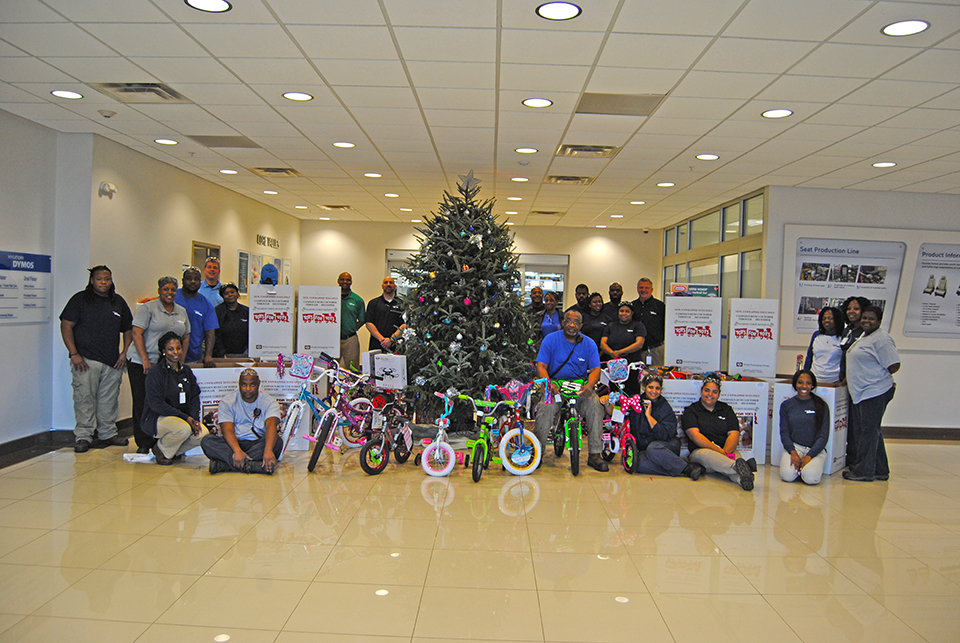 Team members of the Hyundai Dymos plant in West Point have donated a large number of toys to the Toys for Tots program. The items include boys and girls bikes, dolls, basketballs and footballs and even some drones. The gifts were presented to Toys for Tots representatives Tuesday morning. (Photo by Wayne Clark)

WEST POINT — The 2017 Christmas season will be a little merrier for some children in the west central Georgia region thanks to a Toys for Tots donation made Tuesday morning by employees of Hyundai Dymos.

The West Point plant’s 315 employees had been making donations of such items as children’s bikes, drones, dolls and the like for several weeks, Senior Team Relations Specialist Charlotte Robinson said. The donations spiked in the last week, following the company giving out Christmas bonuses.

This is the third consecutive year Hyundai Dymos has made a Christmas season donation to Toys for Tots. The past two years, the toys went to the Troup County unit of the organization. They were contacted once again this year but had to decline, given the influx of items they’d received. The LaGrange Toys for Tots officials recommended checking with the unit in Muscogee County, which still had some wish lists to fill out for needy families.

Plant Manager John Gick thanked the employees for their generous contributions, which included 13 boys and girls bikes, lots of dolls, basketballs and footballs and even some drones. “I’m real proud of what our team did this year,” Gick said. “They pulled together to make a happy Christmas for those who are not as fortunate as we are.”

Of the eight different departments and three office groups, the Quality Division made the most donations.

“We’re excited about next year,” Gick said. “We will be expanding and hiring 150 new people. We will have two programs instead of one.”

In its first few years in West Point, Hyundai Dymos has over 300,000 car seats, primarily for the KIA Sorentos and Hyundai Santa Fes that have been manufactured at KMMG in West Point.

Both  plants will be producing three different kinds of vehicles in 2018. Hyundai will be manufacturing Sonatas, Elantras and Santa Fes. KMMG will be making Sorentos, Optimas and a new full-size SUV to be known as the ON. It will be comparable in size to the Tahoe.

Ten employees from Hyundai Dymos went to Korea to be trained in making the kind of seats that will be going in the 2018 models. “It was a good experience for them,” Gick said. “Some of them had never been out of Alabama or Georgia before. It was an opportunity for them to experience a new culture. They will be training people here how to do it here.”

Gick said that it’s amazing how far KIA has come in the ten years it has been in West Point. “Dymos” is a shortened version of “dynamic motor systems.” Hyundai is the Korean word for  “modern” and KIA means “coming from Asia.”

The Hyundai Dymos plant is currently shut down for the Christmas/New Year’s holiday. “We’ll get back to work on Jan, 8,” Gick said. “That’s went KIA and Hyundai go back into production. We had a Christmas meal for everyone on our last production day, which was Monday. It was a really good event, and everyone enjoyed it. We even had some people volunteering to sing Christmas songs.

Team members have really enjoyed the big Christmas tree in the plant lobby, just inside the main entrance. The Virginia pine stands a good ten feet high. It was recently brought in from the Gilbert Tree Farm in Fredonia. “It was the biggest one they had,” Gick said.

Gick said that he was really proud of the team members for the way they got into the spirit of giving in the Toys for Tots drive.

“The last couple of days made a big difference,” he said. “We nearly doubled what we had.”