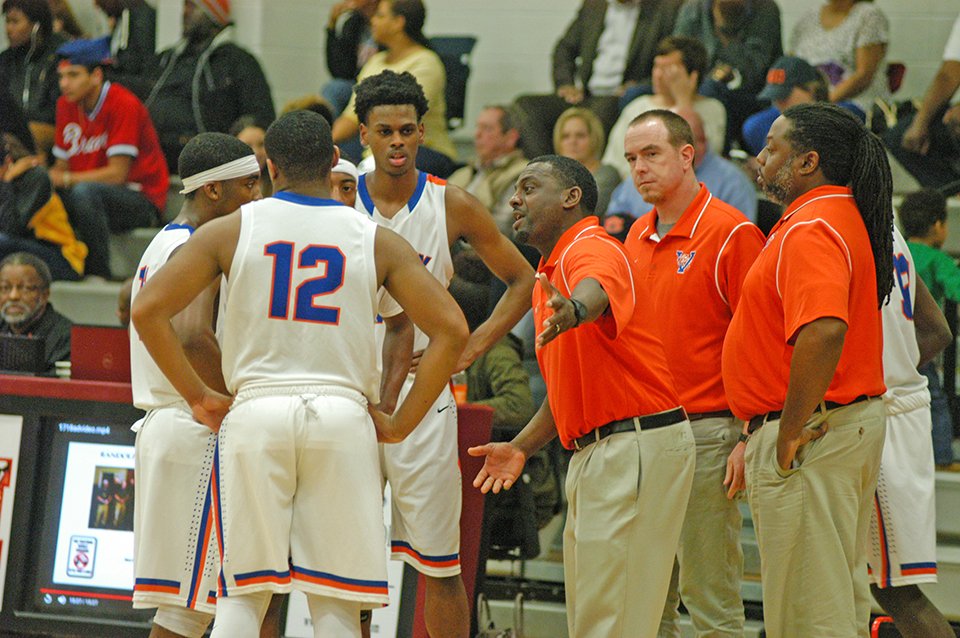 CUTTING IT CLOSE AT THE END — Valley fell down by as much as 15 points in the third quarter but rallied in the final period of play to cut the deficit to single digits. They had several chances to cut it to five points with a little more than two minutes left, but couldn’t get the ball to go in the hoop. Above, Coach Marshon Harper pleads with his team to have better shot selection and to pick up the scoring. (Photo by Wayne Clark)

ROANOKE, Ala. — In a game of many missed opportunities by both teams, the Central Clay County Volunteers defeated the Valley High Rams 58-50 in a third-round game of the Handley High Christmas Tournament.

Overall, Valley did pretty well in the tournament, taking two of three games. In an opening-round game they defeated Wadley 75-42 and in the second round got past host Handley 59-56. The team is now 8-5 on the season.

The Rams jumped out to a 5-0 lead before cold shooting set in. They trailed the Volunteers 14-9 at the end of the first quarter and 36-22 at the half. Both teams missed numerous chances to score, sometimes missing two or three shots from in close.

Central Clay maintained their double-digit lead through three quarters before the Rams cut into it in the final stanza. Valley got it down to a three-possession game at one point late in the game, but the Volunteers pulled away at the foul line late in the contest to win by eight points, 58-50.