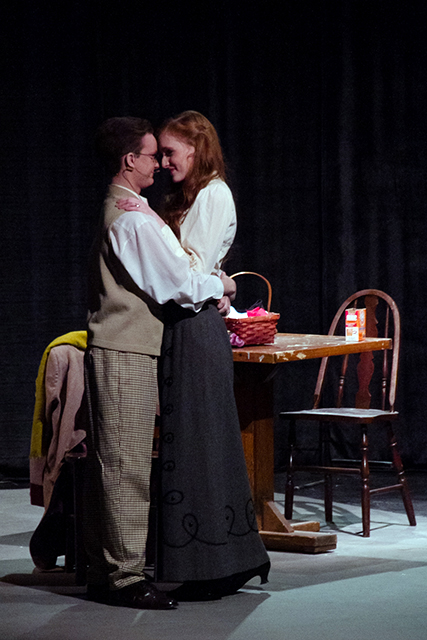 THE GIFTS OF THE MAGI — Monico Garcia, left, and Jayde Singer, right, perform a tender scene as the characters Jim and Della Dillingham during the opening night performance of “The Gifts of the Magi” at New Horizon Theatre. (Submitted photo)

It’s been a busy holiday season for the New Horizon Theatre and things aren’t slowing down.

After a successful weekend run of “The Gifts of the Magi, Director and Stage Manager Bill Nixon is excited to present Julia Langley’s “Once Upon a December,” a musical Christmas revue that will show once this Thursday, Dec. 21 at 7 p.m.

The event, as explained by Langley, is a stage production encompassing visits from snowmen and Santa Claus to “Rockin’ Around the Christmas Tree” to close harmony numbers and more religiously-based songs.

Local band Alabama Avenue will provide the music alongside 25 singers from as far south as Boca Raton, Fla.

“We’re pulling people from all over the Southeast to come and do this show,” she said excitedly. “I have to tell you this is some of the best talent I’ve ever worked with.”

The talent was specifically pointed out by Langley as something attendees to the Thursday show should look out for.

“I’d challenge anyone around to find better talent than what we have right here,” she said.

The production of the show is interesting because the cast and crew have less than a week to rehearse.

The performers are given the music and simple guidelines for what the show entails but actually practice is only done for the few days preceding the show.

This is the fourth year New Horizon has done one of Langley’s holiday-themed shows.

“I came to Bill [Nixon] a year’s back and started talking about a program that raised money for the theatre,” Langley said. “We put it together and every year it has grown.”

Besides the upcoming show, it was also recently announced that money from this past week’s show and from every Christmas show in the future will be donated to a local charity.

Nixon made the announcement as part of the opening night introduction to “Magi” last week.

The donation is $1 from every ticket sale and this year $353, based on the overall attendance to “Magi,” was donated to the Christian Service Center.

The idea came because of Nixon’s love of the Trans-Siberian Orchestra. The group makes a similar donation, over $10 million since they starting touring.

Nixon said the idea struck his this past year and that there was no reason New Horizon couldn’t do the same.

“Our board, I mention it [the idea] to them and boom they jumped on it,” he said.

With everything else going on, Nixon is happy with the show of support show to the theatre.

The reaction to “Magi” was great, he said.

“Every audience was appreciative. It was smaller than we would liked to have had but 353 people did attend.”

The Thursday opening night say a nearly packed house, he noted, with the Saturday shows being the slowest.

“We got nothing but good comments from everyone,” Nixon added. “The show could not have been better. There were very few glitches. We had six of the most talented people I’ve ever seen.”

Overall “Magi” was a great success.

The New Horizon Theatre will present Julia Langley’s “Once Upon a December” on Thursday, Dec. 21 at 7 p.m.

“If this show doesn’t put you in the holiday spirit, nothing will!” Langley said.

In a fast-moving meeting on Monday. the Lanett City Council formally accepted a $41,840 grant from the Alabama Department of... read more