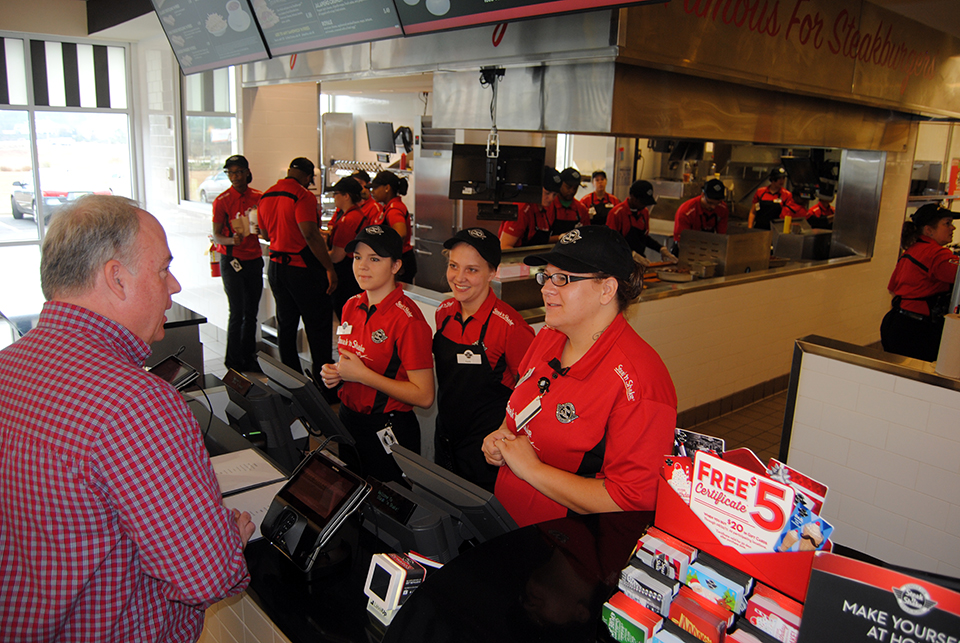 COUNTER SERVING – When it reopens on Wednesday, Steak & Shake will be a counter-serve type of restaurant. Rather than being waited on at a table, customers will place their orders at the counter. This should speed up the process of getting customers their food. Since it’s a counter-style type of restaurant, the new Steak & Shake will also be able to serve beer and wine. (Photo by Wayne Clark)

The Steak ‘n Shake restaurant located on Fob James Drive has been closed for several months to transition from a cook-to-serve restaurant to the faster, counter-serve type of restaurant.

A new staff has been hired and trained, there’s a new exterior look and a totally different Steak ‘n Shake opens to the public on Wednesday of this week.

A ribbon-cutting event hosted by the Greater Valley Area Chamber of Commerce was held there Monday morning to offer a preview of what’s to come.

“It’s been a big journey to make a transition from what they were to what they are now,” said GVACC Executive Director Ashley Crane. “We are grateful for this day and the fact that Steak ‘n Shake will reopen this week.”

“We want to welcome them back to our business community,” said Mayor Leonard Riley. “They first opened around a year-and-a-half ago and closed about six months ago to change the format of their business. We wish them well.”

Riley added that owner Thomas Bush had a lot going on in the City of Valley.

“He purchased Langdale Mill and will be tearing it down in the coming years,” he said. “He and his brothers have also been taking down Riverdale Mill. They have a flooring business going on in one of the old warehouses on River Road.”

The mayor said he appreciated the Bush brothers doing business in Valley.

“This is a first for me,” Thomas Bush said. “It’s a new attempt to offer the same great product, but in a more focused environment. We have converted to a counter-serve type of business. We no longer have a waiting staff, and we won’t be serving breakfast.”

Bush introduced Johnathan Velkey, the new general manager for Steak ‘n Shake. He and his family will be moving to the local area from Auburn.

“We appreciate him for all the hours he’s put into getting us here and for the work he’ll continue to do for us.” Bush said.

The six-month closing and the change of concept, Bush said, was done for the sole purpose of better serving the community.

“What we were doing before just wasn’t working,” he said. “We had to hit the big red, re-set button, and we’ll be reopening Wednesday. It’s still a work in progress. There’s no blueprint for a conversion.”

Even so, it’s been a very thorough process.

“We have talked about every little item in this restaurant,” Bush said. “We’ll have the same hours as Zaxby’s (located next door). We’ll both be open from 10 a.m. till 10 p.m.”

A hidden advantage of the counter-serve concept is that the new Steak ‘n Shake will be able to serve beer and wine.

“We’ll have to jump though some hoops to do it, but we are expecting approval from the ABC board. It’s something else we can do to give people what they want,” Bush said.

Jessi Minor, general manager of Zaxby’s, will serve Steak ‘n Shake in a community outreach capacity. She will be coordinating catering for both restaurants. “No order is too big,” Bush said. “We can tailor a menu to what you need. We can bring hamburgers or chicken fingers to your business.”

Headquartered in Indianapolis, Ind., Steak ‘n Shake has close to 550 restaurants, most of them are company-owned but more than 125 of them are franchised. The casual restaurant chain is primarily located in the Midwestern and Southeastern states, but there are some Steak ‘n Shakes in the western U.S., in Europe and the Middle East. Some restaurants are open 24 hours a day, seven days a week. In Valley, though, it will be from 10 till 10.