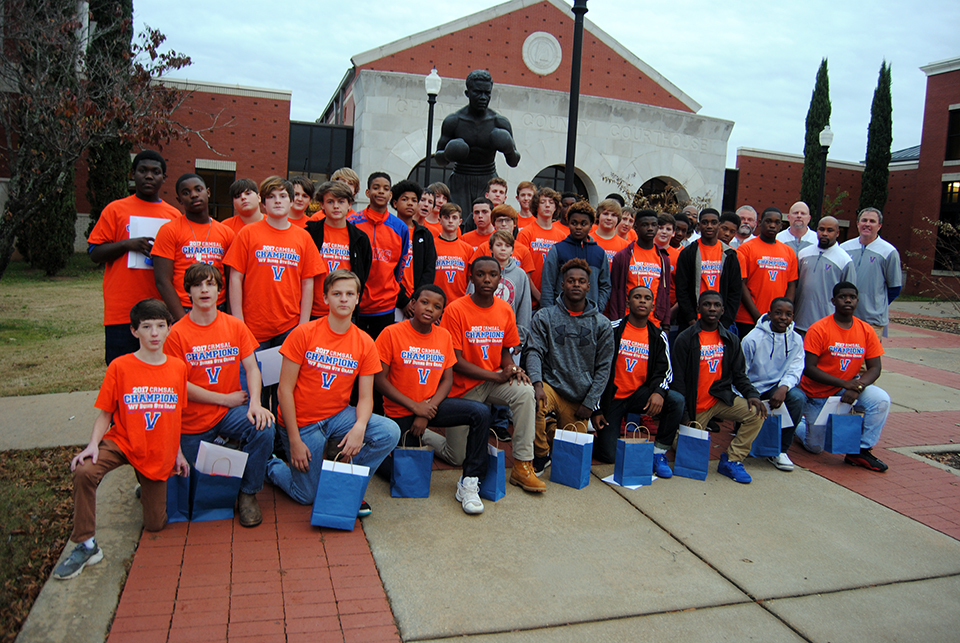 HONORED BY COUNTY COMMISSION — The W.F. Burns eighth grade football team was honored by the Chambers County Commission on Monday. They were undefeated this year and won the Chattahoochee Valley Middle School League championship. They were also undefeated as seventh graders last year. Commissioner Debbie Wood read a proclamation commending the team on what it accomplished this past season. Members of the team were given copies of the proclamation along with treat bags. Above, they are standing on the west side of the courthouse in front of the Joe Louis Barrow statue. (Photo by Wayne Clark)

This year’s W.F. Burns eighth grade football team was honored with a proclamation presentation at Monday afternoon’s meeting of the Chambers County Commission. The team was undefeated this year and won the Chattahoochee Valley Middle School League championship.

The 44 members of the team and their coaches were present at the meeting and each received a copy of the proclamation plus a treat bag.

Commissioner Debbie Wood read aloud the proclamation and asked the players to yell “Go Rams!” every time she looked up to them while reading. The meeting chamber reverberated from the many times the big group of strong, athletic boys enthusiastically did that.

“The success of this team is the result of not only the devotion and hard work of the members themselves,” the proclamation reads, “but also the experience, dedication and leadership provided by head coach Jason Phillips and assistant coaches Michael Power, Jon Poe, George Grimes, Bam Phillips and Jason Etherton.”

“These fine, young athletes have indeed brought great honor to themselves and their community,” the proclamation continues, “and are deserving of the highest praise and recognition for their exceptional efforts and contributions. Therefore, be it proclaimed by the Chambers County Commission that we hereby commend and congratulate the 2017 W.F. Burns 8th grade football team as winner of the Chattahoochee Valley Middle School League championship.”

The team and its coaching staff received a standing ovation from everyone in the room.

“We are so proud of you guys,” said Commission Chairman Charlie Williams. “We want you guys to bring back Valley High. We want Valley High, Lanett High and LaFayette High to put Chambers County on the map.”

“We couldn’t ask for a better group of young men,” said Dr. Frankie Bell, W.F. Burns principal. “It’s young people like this who will take our country back. Our kids are okay. I love each one of you more than you realize. These young people will bring Valley High back.”