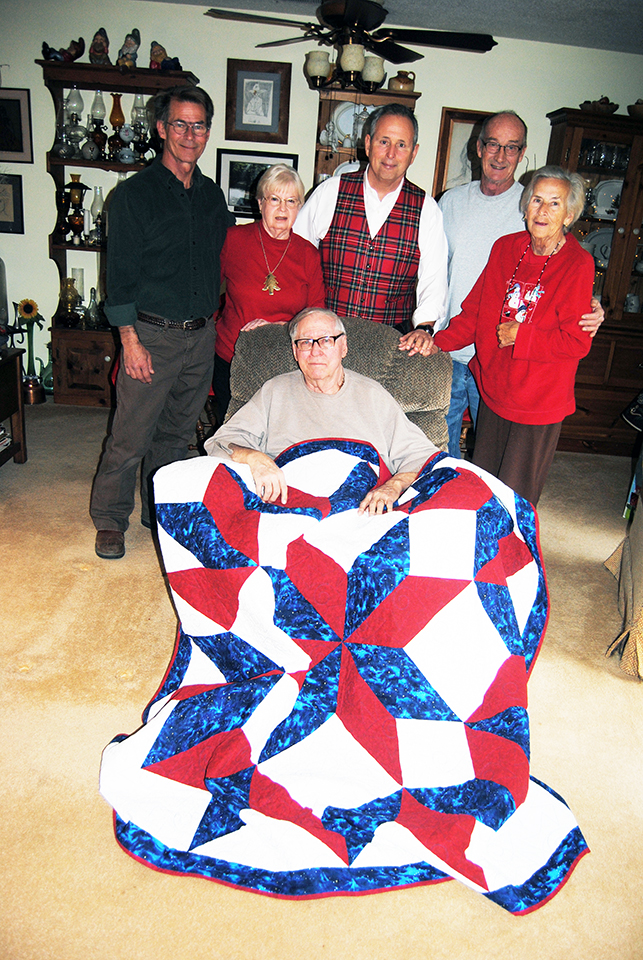 Long-time West Point resident Paul Crook is the latest recipient of a Quilt of Valor presented by the State Line Quilts of Valor chapter. The presentation took place Sunday at Mr. Crook’s home on Sunset Drive in West Point.

In making the presentation, chapter representative Jessica Ramirez said that over 175,000 of these quilts have been presented to veterans since 2014.

Quilts of Valor is a national foundation of people who make quilts to cover service members and veterans who have been touched by war.

“They present comfort, honor and gratitude for their sacrifices and service,” Ramirez said.

“That’s pretty!” Mr. Crook said as Ramirez presented the quilt made for him by West Point women.

There was a time in his life when he could have really used something like that. It was the day after Thanksgiving in 1950. Crook was still a teenager at the time and was with the U.S. Army on the Korean peninsula only 15 miles from the border with China. He remembers having a really nice Thanksgiving dinner the day before. It had been a good day, given the hardships he and his fellow soldiers were dealing with.

They’d gone into combat not prepared for winter weather, and it gets really cold in Korea. He had only two pairs of cotton socks, and at the time his lightweight clothing would freeze to his body. He and his comrades hadn’t changed clothes in weeks. On the day after Thanksgiving – the day we now call Black Friday in the U.S. for all the shopping that takes place – it really was a black day for U.S. soldiers who were only 15 miles from the Yalu River, which separates China from Korea.

It was the day of the blowing of the bugles and the banging of the gongs. Mr. Crook says he’d never heard such a sound in his life and knew something ominous was taking place. Approximately 350,000 Chinese soldiers had crossed the border determined to throw the U.S. off the Asian continent. Crook and his fellow soldiers were right in the middle of it.

U.S. forces near the border were vastly outnumbered. There was nothing else to do but fall back and regroup.

“They told us it was a retrograde movement, that we’d be ‘advancing in a different direction,’” Crook recalled.

It was such a hasty retreat against overwhelming odds that no one had time to make out daily reports for the better part of two weeks. Casualties in Mr. Crook’s unit were 75 percent. The 8th Army made the longest retreat in U.S. military history, something made possible by the Turkish Brigade’s successful, but costly, rear-guard action near Kunuri to slow down the Chinese attack. Chinese forces pressed on and captured Seoul in early January 1951.

These gains, though, were made at a high cost. Chinese troops suffered from deficient military equipment, serious logistical problems, overextended communication and supply lines and the constant threat of air attacks. These factors led to a much larger casualty rate than was experienced by the U.S. and its UN allies.

The war would drag on until the summer of 1953 when an armistice was signed. The Korean peninsula was divided along the 38th parallel into separate countries. That’s the way it stands today, but relations between the two countries have never been good. With North Korea now having nuclear weapons, not to mention massive artillery positioned near the border, South Korea is in a precarious situation. Seoul is one of the most economically prosperous cities in the world but is well within range of North Korean guns. There’s also an estimated 100,000 Americans living in Seoul.

“Anyone who made it out of that was a hero,” says son, Mike Crook.

The kind of quilt Mr. Crook received Sunday would have been a highly-prized possession at the time. The weather was bitterly cold, hostile Chinese and North Korean forces were all around, and the soldiers had to keep moving south. At times, they made ground by crawling. At some point during this horrible experience, Mr. Crook’s feet froze. His comrades were able to get him back to safety, but his feet were in such bad shape that he had to spend several months in a hospital in Japan. The first treatment was to use hot water to remove the clothing that had frozen to his skin.

Altogether, Mr. Crook was in five campaigns in the Korean War. That’s only two campaigns short of what Audie Murphy did in World War II. The most decorated U.S. soldier of that war, Murphy was in seven campaigns.

When he’d finally recovered from the frozen feet, he was sent back home to Clearwater, Fla. He was stationed at Fort Benning when his six-year enlistment was up.

Mr. Crook is best known locally for his work for the City of West Point. He moved to West Point from LaGrange in July 1966. He was a police officer for nine years during the period when Harvey Thompson was chief. “I was with them till 1975 when they made me superintendent of the street department,” he said. “I was there for 21 years until I retired at age 65. I’ve been retired now for more than 20 years.”

“We know that freedom is never free,” Ramirez said in the presentation ceremony. Our Quilts of Valor are meant to say thank you for your many sacrifices. For those of us who have never been in combat, or even in a war zone, such experiences are beyond our capacity to comprehend. For all of you who have endured, thank you for preserving our country’s independence and the personal freedoms we enjoy here in America.

“We understand that you made great sacrifices in the defense of our nation. What you and your fellow veterans have done for us is forever etched in our memory. It’s too important to ever be forgotten. Without the heroic actions of our men and women in uniform, America simply would not be ‘the land of the free and the home of the brave.’ On behalf of all of us, we say thank you!”