Year in Review: Looking back on the first half of 2017 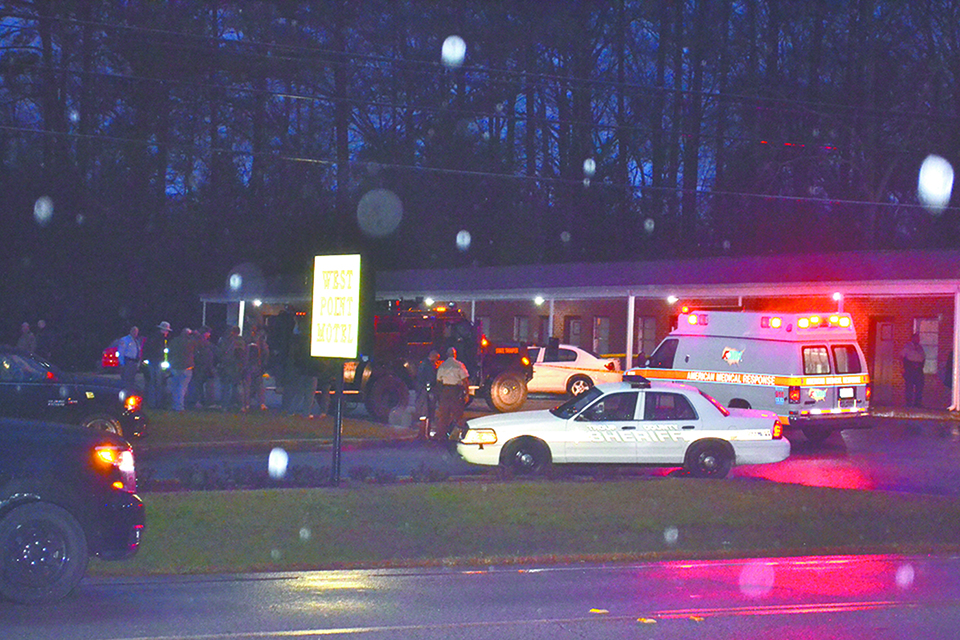 MURDER MANHUNT ENDS IN WEST POINT — Two fugitive murder suspects, wanted in connection with the deaths of three people in two states, were found at the West Point Motel (shown above) following a tip from a local citizen. Following a three-hour standoff, one of the suspects, Mary Rice, surrendered to authorities moments before her companion, William Boyette, took his own life. (Photo by David Bell)

EDITOR’S NOTE: This is the first in a two-part series looking back at the year 2017 in the Greater Valley Area.

Construction began on the new Point University residence hall in downtown West Point. The site, formerly occupied by the West Point Foundry building, is located at the corner of Third Avenue and Ninth Street.

The old foundry, which once was a source of machinery parts for the area’s textile industry, was razed by the City of West Point under a grant earmarked for urban revitalization. The site was then filled and leveled by Chris Clark Grading and Paving Inc. of Lanett.

A Troup County Sheriff’s deputy was wounded in a shootout with an individual he had been sent to evaluate for mental issues.

Deputy Michael Hockett, who had been a patrol officer for less than a year, was dispatched to a residence on Jackson Street just outside the city limits of West Point around 11:55 a.m. regarding a welfare check. A family member of the occupant, identified as Matthew Edmonson, 28, had requested assistance from law enforcement after the man exhibited what was described as a “psychotic episode.”

What ensued was a six-hour standoff between Edmonson and multiple law enforcement agencies, including SWAT teams from the LaGrange and Columbus police departments, West Point police, Georgia State Patrol, Georgia Bureau of Investigation, FBI and the Department of Homeland Security. The situation finally came to an end when Edmonson was taken into custody around 7 p.m. after negotiators were able to persuade him to surrender.

Edmonson sustained a single gunshot wound to the shoulder and was transported to WellStar West Georgia Medical Center for treatment before being transported to the Troup County jail.

One of the fastest growing types of small business came to West Point. A craft brewery known as Chattabrewchee Brew House opened in the former Recline & Sleep building.

“We will make beer of all sorts,” says Chattabrewchee Brew House owner Mike Denehy. “Our particular theme will be our Southern location and our product’s drinkability. This is not Boston or San Francisco. If we came in with beer that was pitch black, that may not be what you want. Everything about us is Southern.”

The Chambers County Commission approved a bond refinancing resolution that will save the county approximately $242,000 over the lifetime of the original bond issue.

County Attorney Skip McCoy presented the resolution that calls for the refunding of the county’s Series 2008 Warrants in the original amount of $7,215,000 and the issuance of Series 2017 Warrants in the amount of $5,345,000. The new bond proceeds will pay off the old issue and save the county $242,000 over the lifetime of the bond issue. The new bond issue will pay out at the same time as the original 2008 issue.

Two murder suspects wanted in connection with three slayings in two different states were cornered by local law enforcement in a room at the West Point Motel on U.S. Highway 29.

William “Billy” Boyette Jr., 44, and Mary Barbara Craig Rice, 37, had been subjects of a nationwide manhunt over the past week following the murders of two women at the Emerald Sands Inn in Milton, Fla., on Jan. 31.

The two were also believed to have been involved in the killing of local native Peggy Broz, 52, at her home in Lillian, Ala. She was the daughter of the late John Will and Shirley Phillips of Lanett.

“We are thankful that none of our officers were injured in this incident, which had the potential to be extremely dangerous,” Woodruff added. “I’m also thankful to the citizen who chose to make that phone call and report the vehicle. And, our hearts go out to the families of victims who lost their lives at the hands of these suspects.”

With the win, Lanett can now take its rightful place among the AHSAA basketball greats of all-time as a rare back-to-back state champion. They did in class, style and in resounding fashion when the game was on the line.

Lying beneath a large oak tree at the foot of a hill off Miller Street in LaGrange is the grave of a former slave, who became a master bridge builder and state representative. But only recently has the gravesite been properly marked for someone of such historical significance.

Horace King was born in South Carolina on Sept. 8, 1807. At age 25, he and his owner, John Godwin, moved to present-day Phenix City, Ala., where they built the first bridge across the Chattahoochee River to Columbus, Ga. It would be followed by dozens more spanning rivers and waterways across three states, including a bridge in West Point.

Recent improvements have been made at the cemetery, including landscaping and paving of the parking lot, funded by a Georgia Tourism Development grant. The Troup County Historic Preservation Commission went a step further by having King’s gravesite marked with a five-foot granite obelisk, clearly visible from anywhere on the property. Nearby stands a historic marker bearing his photo and brief description of his life.

The CCDA developed the county branding program back in 2015, utilizing grant funds made available for the process. The “Strength Woven In” campaign began in November 2015. The CCDA fully implemented the branding concept in all aspects of its operations, and worked with the City of LaFayette last year in incorporating the brand logos into city paper work, facilities and vehicles.

Kimberly Carter of the Chambers County Development Authority told the committee this is an exciting time for the county, and the branding program can help accelerate the good things that are happening locally.

High winds and heavy rain from strong thunderstorms that moved through the local area resulted in several incidents of damage to property.

Most streets had a heavy coating of leaves and tree debris, and a lot of large trees fell to the ground, some of them landing on dwellings, others taking out power and cable TV lines and still others blocking roadways. Although there was extensive property damage and a lot of inconvenience caused by power outages, crews worked diligently to restore power and other services.

“We went back to using pens and paper to issue tickets and write reports,” said Sheriff James Woodruff. “The same procedures were implemented for booking inmates into and out of the jail. You don’t realize how much you rely on technology until it suddenly goes away.”

Representing an investment of more than $1.1 billion, KMMG launched production of the Sorento Nov. 16, 2009. It was joined by the Kia Optima mid-size sedan in 2011. Together with on-site and local suppliers, KMMG is responsible for the creation of more than 15,000 jobs in West Point and the surrounding region. To date, KMMG has produced almost 2.4 million vehicles.

The Alabama Boxing Hall of Fame inducted its inaugural class of five individuals who have played iconic roles in the sport of professional boxing. Among them was Chambers County native and former world heavyweight champion Joe Louis Barrow.

Known as the “Brown Bomber,” Joe Louis was born in LaFayette on May 13, 1914, as the seventh of eight children to Munroe and Lillie Barrow.

“It was an honor and privilege for me to attend this ceremony and accept an induction trophy on behalf of the city,” said LaFayette Mayor Barry Moody. “The life of Joe Louis is an incredible story, and serves as an example to our young people today that no matter who you are or where you come from, you can accomplish anything you want if you have enough heart and desire to make it happen.”

The Charter Foundation announced that it has approved a pledge of one half million dollars ($500,000) to Point University.

The purposes of the pledge are to support development of Point’s on-line teaching initiatives and to enhance student recruitment.

“This is a special and timely opportunity to team up with Point University to make college more affordable and accessible,” Robert L. (Bob) Johnson, CEO and board chairman of Charter Financial Corporation and president and chairman of the Charter Foundation, said. “Point’s goal of equipping the next generation of leaders for Christ inspires our team. God is big and this is but a small way for us to join in His plan.”