Battle a ‘rock’ for Springwood basketball 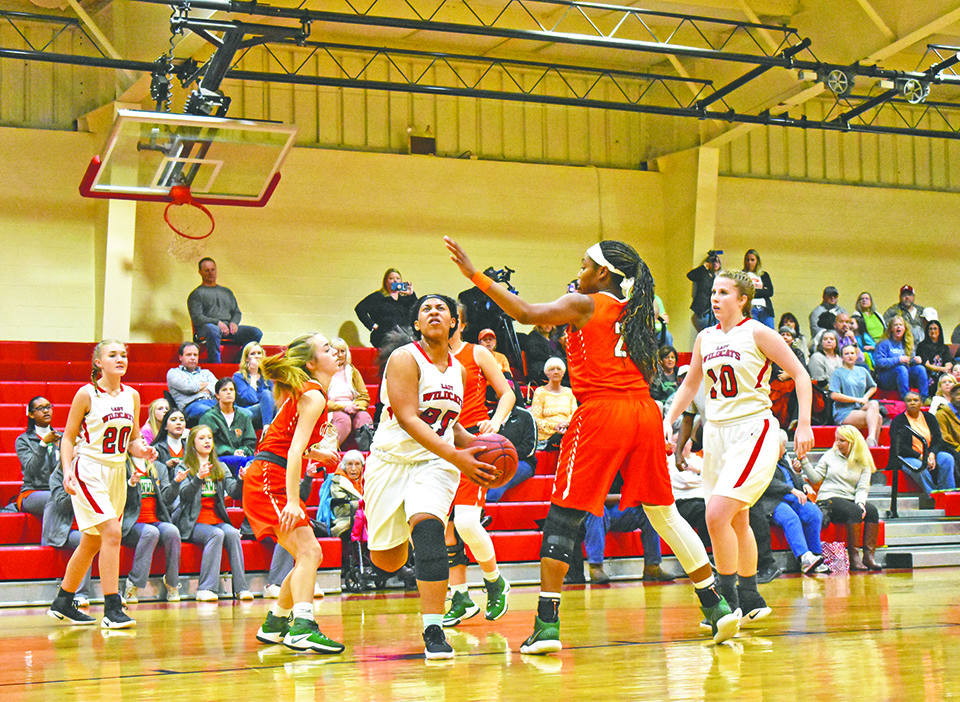 Springwood School senior Amaya Battle (25) is averaging around 14 points per game this season. Lady Wildcats head coach Rick Johnson calls her the “rock” of his team. (Photo by Sam Chandler)

LANETT — The vice president of the Springwood School senior class also participates in theater and track.

But make no mistake: Basketball, the sport Amaya Battle has played since elementary school,  remains her first love.

Her innate passion reveals itself on the court with each made shot, each drawn foul and each smooth assist. On Monday, Battle’s heart for the game surfaced in a particularly evident way.

After her final home game at Boswell Gymnasium ended with a loss to Glenwood School, tears flowed from Battle’s eyes. The emotion stayed etched on her face as she and her mother, LaTasha, walked from the baseline to half court during the senior night ceremony.

Johnson calls Battle the “rock” of his current team. Her dependability is a major reason why the Lady Wildcats (14-6) enter tonight’s clash with Edgewood Academy in the opening round of the AISA Class AAA Region 1 Tournament as the state’s eighth-ranked squad.

Battle has provided Springwood with consistent offensive production, defensive intensity and a general sense of direction. The Lady Wildcats have needed all of those things this winter, their first without two-time AISA Player of the Year Tazsa Garrett-Hammett, who graduated.

“She played a big role last year,” Battle said. “They were looking at me to step up and help the team out, which I was willing to do.”

Battle shares a close bond with Garrett-Hammett and her sister, Fannasy, a 2016 Springwood basketball alumnus. The siblings introduced Battle, a teammate on their travel basketball squad, to Springwood a few years ago.

The introduction eventually led to a marriage. Battle transferred from Callaway High in LaGrange, Ga., prior to her sophomore year in 2015. The Lady Wildcats went 30-0 that season and won the state title.

But times were different then. Battle played a small role in a large production. This season, she is among the stars of the show.

Battle is averaging around 14 points per game, which is a sizeable uptick from the eight or nine that she chipped in routinely last year. She possesses a shooting stroke that Johnson labels “pure,” along with the strength and vision required to attack the basket.

When clicking, she has contributed more than 20 points in a single outing.

“That value has been just extremely high,” Johnson said.

But Battle is quick to deflect praise. She credits her teammates, like fellow seniors Elizabeth McClendon and Kari Sims, for helping her navigate the transition from role player to key player.

She couldn’t do it alone.

“It wasn’t just an individual thing,” Battle said. “You need your team to come together so that you all will be on the same page.”

They have been more often than not.

Despite losing Garrett-Hammett and four other seniors from last year’s squad that advanced to the state final four, the Lady Wildcats have marched through their 2017-18 schedule looking like a team equipped to make a run.

Four of their six losses came to area opponents Glenwood and Lee Scott. It has been generally smooth sailing apart from those defeats.

“People, with losing Tazsa, they thought that we wouldn’t be as good as we are,” Battle said. “We had to kind of prove to everybody else that we’re still here, we’re still the team.”

Springwood will try to take the next step tonight against Edgewood, which it already has beaten once this season.  A win at the Montgomery Multiplex will secure the Lady Wildcats’ spot at next week’s state tournament. A loss will end their campaign.

Tipoff is set for 6 CST.

The Springwood boys (9-11), who are coming off a momentous win against Glenwood, also will face Edgewood tonight in an elimination game. Tipoff for their matchup is set for 7:30.