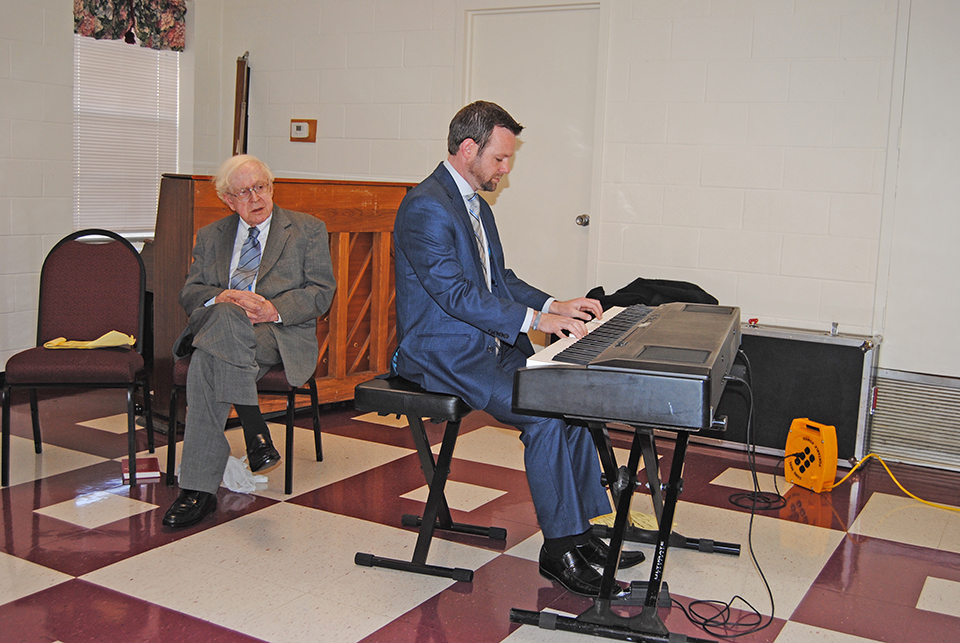 TWO ELLIOTTS — They’re not related, but Bobby’s Backyard Brotherhood founder Bobby Elliott (left) said he is quite proud to be a namesake of piano virtuoso Bryan Elliott. On Tuesday, Bryan Elliott played to a packed house at the weekly meeting of the Brotherhood at the Langdale Congregational Christian Church. (Photo by Wayne Clark)

VALLEY — Bryan Elliott has come a long way since he was a child prodigy playing the piano at local events arranged for him by Bill Gilbert.

The two made for a good team, with Gilbert the front man telling the audience what his young, gifted partner was about to play for them. They weren’t beyond cracking a few jokes with each other. Elliott was 13 years old back then and had seldom played for anyone far from his home in Beulah.

He’s 32 now, married, raising three children and playing with the Gold City Quartet, a nationally famous gospel group. Gold City got its start in Dahlonega, Ga., in the early 1980s. Since that time, it has become one of the most awarded gospel groups ever. In 2017, it was inducted into the Gospel Music Hall of Fame in a ceremony in Nashville, Tenn. Gold City performers have come and gone over the years, but Elliott was with the current group that participated in the induction ceremony.

When it comes to performing gospel, it doesn’t get any  better than that.

With the Gold City Quartet, Elliott has performed in places ranging from Sao Paulo, Brazil, to all over the United States. Their group plays to appreciative audiences everywhere it goes.

“Two the best places we ever played were in Brazil and the Times Square Church in New York City,” Elliott said.

On Tuesday morning, he was back to his roots, playing his Yamaha P200 piano before a packed house at Bobby’s Backyard Brotherhood at the Langdale Congregational Christian Church. Gilbert was with him once again, playing the familiar role of front man.

He told everyone about the song Elliott was about to play, occasionally dedicating it to someone in the audience.

Elliott drew much applause with such classics as “Mansion on the Hill,” “Where Could I Go But to the Lord?”, “Wait Till You See Me in My Brand-New Home” and three songs written by Albert Brumley.

Gilbert said the first appearance he arranged for Elliott was an awards program at Lanier Memorial (now EAMC-Lanier) Hospital in the late 1990s. Elliott had with him the 66-key piano he’d learned to play by ear.

In addition to gospel tunes, Elliott plays other types of music for fun, including fast-paced boogie-woogie type music. When he was still in his early teens, Gilbert once asked him how he could do that.

“I don’t know,” he told him. “I heard three different songs and mashed them together.”

By the time Elliott was 14,  he was performing 175 times per  year. That was just the start.

The Gold City Quartet performs all over the United States  and is on the road 48 weeks per year. “We take one week off in the summer and two to three weeks off in December,” Elliott said. “We’re pretty much booked up this year. There’s a few holes in our schedule, but they usually get filled in as the year goes on.”

They travel by bus. Elliott describes it as a home on wheels.

“Everything you need is there,” he said. “The only time we ever sleep in a motel is if the bus breaks down.”

Elliott, who resides in LaGrange, comes from a musically gifted family. His dad, Ronnie Elliott, played the 66-key piano when Bryan Elliott was growing up. In the 1970s, he played for The Seekers, a well-known quartet in the Columbus-Phenix City area. Today, he’s the pianist for Grace Baptist Church, located on  West Point Road not far from LaGrange.

“I owe everything to my dad and to my family,” Bryan Elliott said. “They have always encouraged me to pursue music.”

Elliott’s wife, Kelly, is the music director at the church, and daughters Brooklenn and Marlee frequently sing in church. Nine-year-old Marlee has sung at appearances by the Gold City Quartet.

Elliott will be playing a new piano when the Gold City Quartet goes back on the road this year. The Yamaha is being replaced by a Nord Stage 3. “They are very similar,” he said, “but the Nord has more true piano sounds. It sounds more like a grand piano.”

The Yamaha served him well on Tuesday as he performed for the Backyard Brotherhood, which celebrates its 15th anniversary as a prayer group in June.

“We started with five men in my woodworking shop,” said founder Bobby Elliott, who shares a last name but no relation with Bryan Elliott. “We went to my back porch as more local men got involved. It grew to the point where we started having our meetings here at the church.”