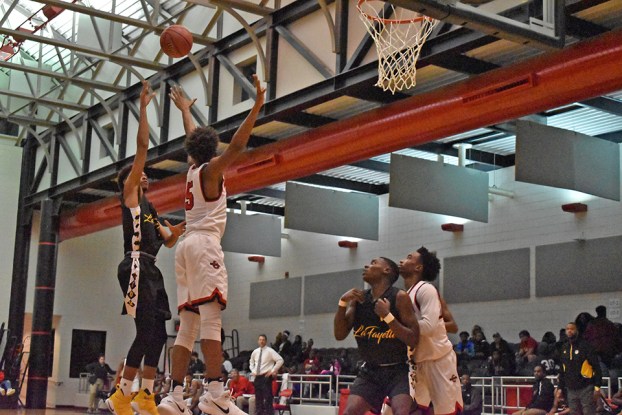 LaFayette High School sophomore Matavais Burton (2) shoots over an Opelika defender in the second half of his team’s road game on Wednesday, Jan. 3. Burton finished with 13 points in the Bulldogs' 73-64 overtime victory. (Photo by Sam Chandler)

Bulldogs down Opelika in OT

OPELIKA — Jamarquez Boston-Gaines fought through contact on his way to the basket. But he didn’t allow the obstacle to affect the outcome.

The LaFayette High School senior guard converted a contested layup while drawing a foul. He then celebrated the dynamic play by pounding his fist against his chest, nodding his head and pointing to the Bulldogs’ fan base.

“If I get an and-one, I’ve got to beat on my chest and get the crowd on their feet and get my teammates going,” Boston-Gaines said. “It’s just a lot of emotion.”

Boston-Gaines’ soaring layup provided his team the boost it needed in overtime of the Bulldogs’ 73-64 victory at Opelika on Wednesday night. LaFayette outscored its opponent 13-4 in the extra period to seal the result, which had once seemed improbable.

LaFayette fell behind by as many 13 points in the second quarter before storming back.

“It seems like we find ourselves in more of these games than we would like,” LaFayette head coach Obadiah Threadgill said. “Them being down 10 or so does not rattle them. We know we can run off points fast.”

Boston-Gaines played a critical role in the comeback. He recorded 16 of his game-high 18 points after halftime. He also corralled a number of rebounds and fortified his team’s press defense.

“He’s a senior and he’s trying to give this team what they need,” Threadgill said. “When he gets it going, he is impressive to watch.”

So were a few of his teammates. Corey Boston (17 points), Matavais Burton (13), Markevious Moore (12) and Jordan Wallace (10) tallied double-digit point totals. All four are sophomores.

“We’re always in the game because we’ve got talent,” Threadgill said. “We’ve got guys that can play.

It showed down the stretch, as LaFayette had a chance to win in regulation despite its slow start.

With 15 seconds left in the fourth quarter, Burton released a long floater that hit the front of the rim before clanking through the hoop. The bucket gave LaFayette a 60-59 lead, one of its first of the night.

But it didn’t hold.

Opelika’s Jamius Mitchell was fouled under the basket during a layup attempt with less than a second remaining. He sank one of his two ensuing free throws to send the game to overtime.

That’s when Boston-Gaines, and Boston, took over. The tandem combined for nine points in the four-minute period.

Those unquantifiable qualities have enabled Threadgill’s squad to overcome its youthfulness. Even though four of the team’s five starters are 10th-graders, LaFayette has bolted out to an 11-4 start this season.

It will aim to sustain its momentum on Friday. The Bulldogs will host Class 2A, Area 8 rival Lanett, which it has not faced since last February.

LaFayette saw its season come to an end when it fell to the Panthers in the state playoffs.

“It’s going to be a hard game and everything,” Boston-Gaines said, “but we’re going to stay focused and do what we do best.”