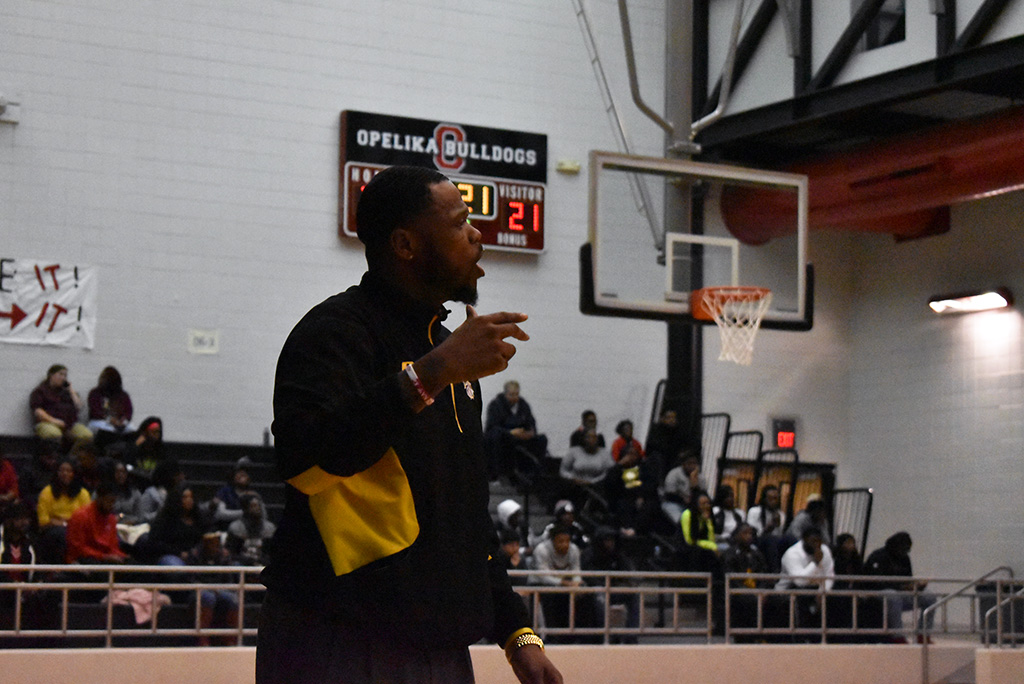 RIGHT: LaFayette High School head coach Obadiah Threadgill, whose team has won two games this week, predicts tonight’s matchup against rival Lanett will be like a “12-round heavyweight fight.” (Photo by Sam Chandler)

LANETT — It would be easy to mistake Richard Carter’s words for hyperbole. But he is not exaggerating.

When the seventh-year boys basketball coach at Lanett High School describes the rivalry with neighboring LaFayette, he unspools a list of the nation’s greatest grudge matches.

Tonight, the next chapter will unfold.

After nearly a year of waiting, LaFayette (11-4) will host Lanett (6-4) in the teams’ first meeting since the 2017 Class 2A Northeast Regional final. Lanett’s 53-50 victory last February secured its spot in the state tournament, which it won for a second consecutive season.

LaFayette, the 2015 2A state champion, saw its campaign come to an abrupt end with the defeat. The Bulldogs now have redemption on their minds.

Threadgill’s Bulldogs claimed victory over Lanett only once in four attempts last winter. The teams split a pair of regular-season meetings before Lanett won the Area 8 tournament and region crown.

But LaFayette enters tonight’s game riding a burst of momentum. After suffering a trio of defeats at holiday tournaments, it has won its past two outings. The Bulldogs dispatched Handley on Tuesday, 52-48, and sealed an overtime triumph at Opelika, 73-64, on Wednesday.

“When Friday comes, it’s just time to perform,” said LaFayette senior guard Jamarquez Boston-Gaines. “It’s going to be a hard game and everything, but we know we’re going to stay focused and do what we do best.”

Recently, that has entailed climbing out of early holes. Slow starts have hindered Threadgill’s top lineup, which consists of Boston-Gaines and four sophomores, though the deficits have not proved insurmountable. Both of this week’s victories saw LaFayette rally from sizeable deficits.

But remedying the issue will be paramount against a Lanett team that Threadgill likened to the NBA’s Golden State Warriors, who are widely regarded as the league’s most dynamic team.

The Panthers have the personnel to overwhelm opponents both in the post and around the perimeter. Forwards Emanuel Littles and Anquaevious Pollard, who stand 6-foot-7 and 6-8,  anchor an imposing frontcourt, while Terrion “Ty” Truitt anchors an agile backcourt.

The three seniors will test a LaFayette team that is lacking in both size and experience. But Carter knows by now that any measurable advantages mean little against the Panthers’ chief rival.

Lanett wasn’t able to do that on Tuesday, when it suffered a 63-56 loss at Central-Phenix City. Poor free throw shooting ailed the Panthers in the defeat. Tonight, converting from the charity stripe will be a point of emphasis, as will controlling the boards and playing stout defense.

“If we can be solid on defense, cause them to make some turnovers, then we’re going to be in good shape,” Carter said.

Tipoff for the varsity boys game will likely take place around 7 p.m. (CST). It will follow the junior varsity boys and varsity girls matchups that will be contested on a rolling schedule beginning at 4.

Threadgill said his team will be ready to defend its home floor.

“It will be a 12-round heavyweight fight,” he said. “They are the favorites; we respect them as such. We’re going to get in there and get after them.”