Davidson a spark for Springwood basketball 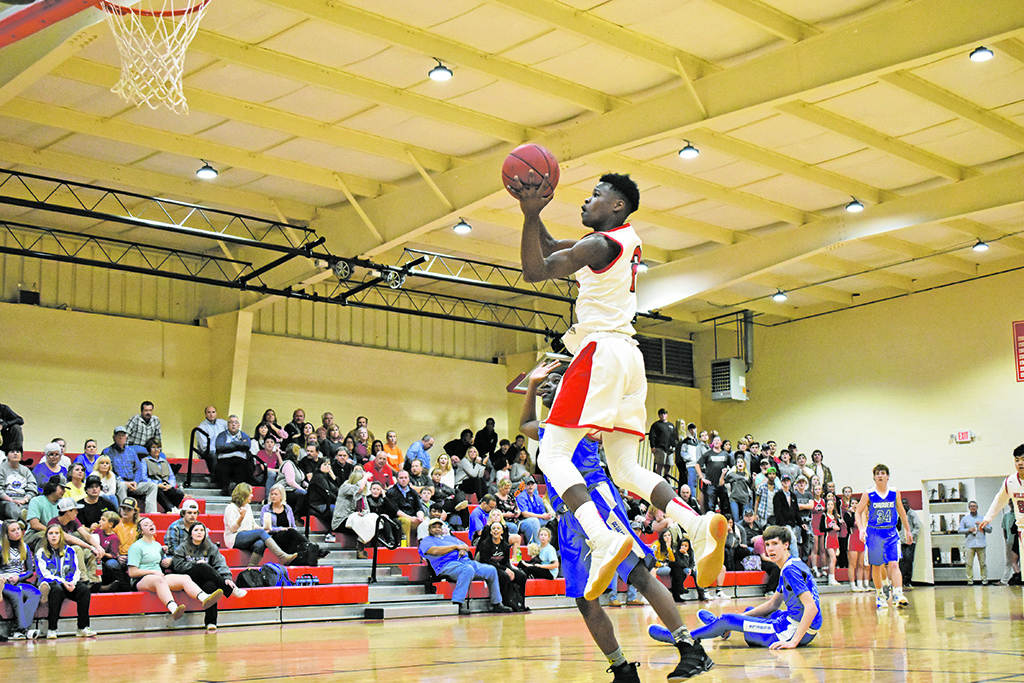 That’s how much time remained in regulation when Gus Davidson gathered possession of the basketball and began to race down court. His team, trailing by two, needed a bucket.

At first, he attempted a layup. But it was off the mark.

So Davidson, after corralling an offensive rebound, dished to teammate Antonio Roberts, who quickly returned the ball to its past possessor.

As the clock ticked toward double zeros, Davidson collected the pass, stepped back and pulled the trigger on an off-balance 3-pointer. He hit his intended target as the buzzer rang.

“It was surreal, really,” said Davidson, a few days removed from his heroic heave. “I hit the biggest shot of my career Friday night at the tournament.”

Davidson’s triple lifted the Springwood School boys basketball team to a 49-48 victory over Glenwood School on Friday in the second round of the AISA Class AAA Region 1 Tournament. The triumph sent the Wildcats (11-12) to the region final, where they fell to Lee Scott Academy, and secured the No. 2 seed in this week’s state tournament.

Tonight at 7:30 p.m. (CST), they will begin the final leg of their postseason journey. Springwood will face Morgan Academy at the Montgomery Multiplex in the state quarterfinal, its first since 2015.

If the Wildcats want to advance, they will need Davidson at his best.

“He’s very talented, very quick,” Springwood head coach Drew Dorsey said. “That, combined with his ability to just put it in the hoop, is really good. He’s one of the best I’ve ever coached.”

Davidson, a senior guard, has done it all for Springwood this season.

He has averaged 21 points per game while hindering opposing ball-handlers with his tight defense. On offense, Davidson can shoot the long ball — as he did against Glenwood — attack the hoop or find the open man.

His method of attack depends on the circumstance.

Davidson’s production has increased dramatically from last year, which was his first at Springwood. He attended Lanett High School as a freshman and sophomore before making the move. Immediately, he had an impact.

Davidson scored close to 12 points per game while playing in the post as a junior. At 6-foot-1-inch, he was one of the taller cogs in Springwood’s guard-heavy lineup.

“I told everybody on the team: ‘In my mind, he’s one of the top 10 players in the AISA,’ and I meant that last year,” Dorsey said. “I certainly feel the same way this year. His impact has just been incredible.”

Davidson transitioned to the perimeter before the current season and has served as the Wildcats’ primary ball-handler. The switch has freed up his game. His personality has followed.

Dorsey has noticed a change in Davidson’s demeanor from last year to this year. The reserved, laconic guard has become more outgoing, more energetic and more comfortable in his environment.

His influence has grown, too.

Smith was on the court Friday when Davidson nailed the buzzer-beating 3. He said he knew the shot, which prompted a bench-clearing celebration, was true as soon as it left his teammate’s hand.

“When it’s a high-pressure moment, he’s always the one that gets the ball, because he’s really good at handling the pressure,” Smith said. “He’s good in the clutch.”

The Wildcats’ fate may once again hinge on Davidson’s left-handed trigger tonight. Morgan Academy, seeded third, enters the matchup with a 13-6 record.

But the Selma-based school will face a Springwood squad that has won four of its past five games.

Paced by five seniors — Davidson, Roberts, Smith, Christian Lancaster and Garret Partridge — the Wildcats have hit their stride at the right time.

Davidson is leading the charge with confidence.

“If I don’t bring it one night, my teammates will back me up,” he said. “But, most importantly, they’re looking to me as a leader to come out and play well.”