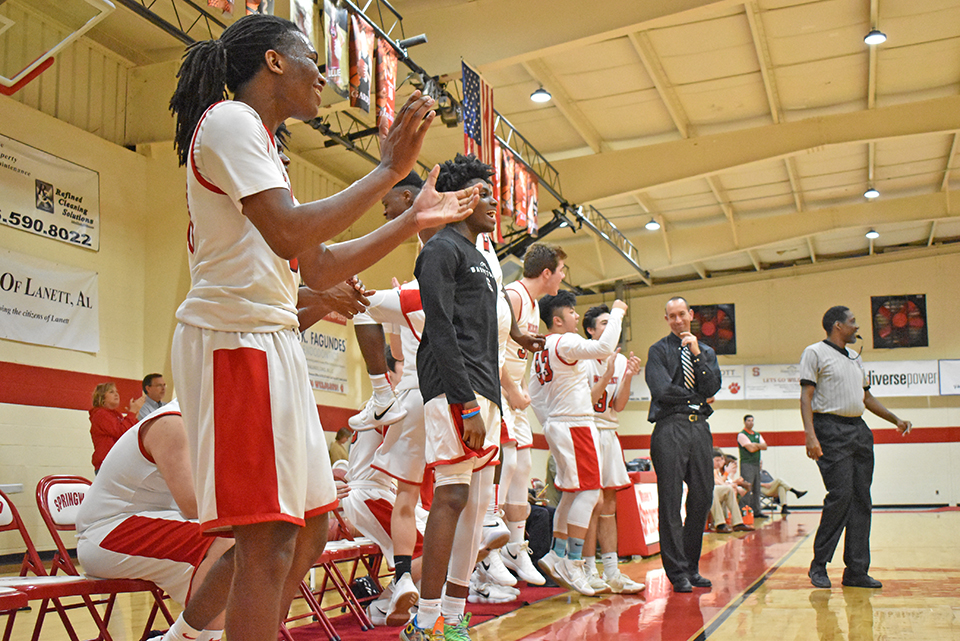 The Springwood School bench rose to its feet after the Wildcats reserve players scored a basket in the final minute of Monday’s 67-49 victory over No. 7 Glenwood. The starters already had taken their seats. (Photo by Sam Chandler)

LANETT — Gus Davidson’s final game inside Boswell Gymnasium may have been his best.

The Springwood School senior erupted for 28 points in a commanding 67-49 victory over Glenwood on Monday night.

And he made it look easy.

In his team’s regular-season finale against the AISA’s seventh-ranked squad, Davidson put on a  scoring clinic. He buried a bevy of free throws, knocked down contested jump shots and drove to the basket with conviction.

“I can’t ask for a better night tonight,” he said.  “The guys came out and played well.”

“I think it’s the best game easily that we played all year,” he said.

Springwood (9-11) stomped on the accelerator from opening tipoff to final whistle. The Wildcats led 17-14 after one quarter and 33-25 at intermission. Davidson closed the first half by sprinting down the court for a layup in transition.

“It started on the defensive end,” Dorsey said. “We were able to get stops, and we were able to push the ball a little bit and get some easy transition buckets.”

The trend continued in the third quarter, when Davidson poured in nine of his team’s 11 points. In one sequence, he converted a contested transition layup at full speed while surrounded by three Glenwood defenders — and he drew a foul.

Davidson celebrated the high-flying feat by turning to the student section and flexing his biceps. Then, he sank the free throw.

“Everything worked tonight,” he said with a smile.

Springwood held a 44-37 edge entering the final period. That’s when Davidson’s fellow senior, Christian Lancaster, joined in on the fun.

Lancaster drained a 3-pointer from atop the key on the Wildcats’ opening possession to ignite his fourth-quarter frenzy. He recorded 11 of his 16 points over the final eight minutes.

After hitting a jumper near the elbow that put his team up by 17 points with 1:59 remaining, Lancaster and the other starters took their seats on the bench. Teammates offered high-fives and hugs as the seniors walked off the court for the final time.

“I just came out and did what I had to do,” Lancaster said.

So did his entire team. In addition to playing stout defense and sound offense, Springwood took care of the basketball. The Wildcats committed only seven turnovers all game.

“It’s a huge confidence boost for us,” Dorsey said. “We’re going into tournament time on Thursday, and that’s the time you want to be playing well.”

Springwood will compete in the AISA Class 3A, Region 1 Tournament on Thursday at the Montgomery Multiplex. It will need to win its first-round game in order to secure a spot in next week’s state tournament.