Dowdell dominant on the field 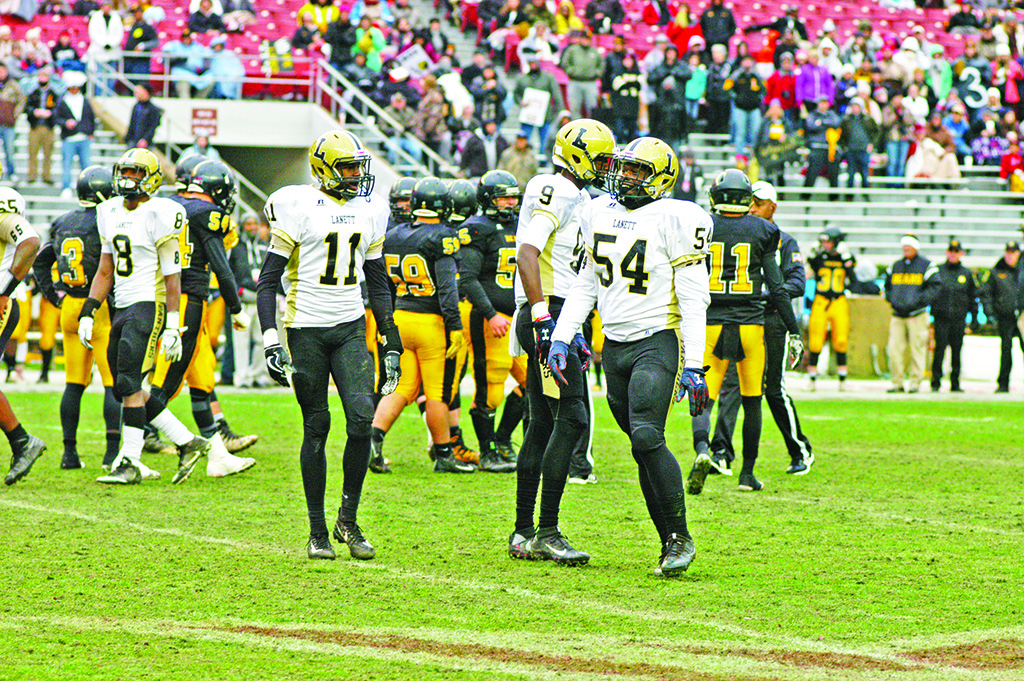 Lanett High School senior Baraskious Dowdell (54) recorded 110 total tackles, including 21 for loss, and 14 sacks this past fall. He lined up at defensive end and nose tackle. (Times-News file photos)

LANETT — Baraskious Dowdell has demonstrated a penchant for prediction.

As a Lanett High School ninth-grader, he told head football coach Clifford Story that the Panthers would go undefeated and win state.

Three years later, Dowdell and his teammates rendezvoused with Story near the 50-yard line at Bryant-Denny Stadium in Tuscaloosa, a blue map hoisted high above their heads.

Dowdell’s prophetic accuracy was verified again a few weeks after that Dec. 8 triumph.

Later in the month, he discovered that he was a finalist for the Alabama Sports Writers Association’s Class 2A Lineman of the Year award. And he wasn’t all that surprised.

“During the offseason, I said I want to play hard enough to be defensive lineman of the year,” recalled Dowdell, a First Team All-State selection. “That’s what I strived for.”

Dowdell, Story, 2A Back of the Year finalist Ty Truitt and members of the Panthers’ coaching staff will travel to Montgomery today for the ASWA Player of the Year Luncheon, where the winner will be announced.

The Panthers defense followed his lead in the fall.

Dowdell, who played at defensive end and nose tackle, helped anchor a unit that allowed fewer than 13 points per game en route to an undefeated season and the 2A state title.

He terrorized opponents with ferocious cheer.

“He plays angry, but his face never shows it,” Lanett defensive coordinator Charlie Williams said. “He may be pushing you 20 yards in the backfield with a smile on his face. That’s just him.”

Dowdell’s season highlights resemble a string of yarn attempting to stop a boulder. Offensive lines are the yarn. Dowdell is the boulder.

The 6-foot-2-inch, 250-pound lineman bulldozed through double teams and tossed ball carriers aside as if they weighed but a feather.

“I just stayed calm, just kept my composure,” Dowdell said of his formula for success. “Don’t do too much, and don’t do nothing less. It just happened. I let good come to me.”

His ascent began two years ago.

At the time, Dowdell was coming off a sophomore campaign in which he played primarily at linebacker. He possessed the strength, but not necessarily the speed, to thrive at the position.

As a result, the coaching staff decided to shift him to the line. Playing alongside Travon Mathis, a 2016 Lineman of the Year finalist, Dowdell flourished.

Dowdell built on a stellar junior season this past fall. He produced prolific numbers, even as other teams directed their attention in his direction. That created opportunities for his peers, like junior defensive lineman D’terrion Glaze, to make big plays.

“When there was no energy, he brought energy to the field,” said Glaze, who also was named First Team All-State.

Dowdell brought energy to the stands, too.

His determined play prompted Panthers fans to shower the gridiron with chants of his nickname, ‘Boo Roc,’ whenever he made an authoritative stop. The verbal cues encouraged him to reload for the next snap. He produced a similar outcome more often than not.

His consistency and dominance are why Dowdell will travel today to Montgomery. Along with Truitt, he will try to become the first Lanett representative in Story’s nine-year tenure to win a player of the year award for football.

Dowdell has a hunch the cards will fall in his favor. His coach, having borne witness to his past prophecies, does too.

“With the numbers that Terrion put up and what Baraskious put up at their positions, I really think that they both will walk away with it,” Story said.