Dowdell named Class 2A Lineman of the Year 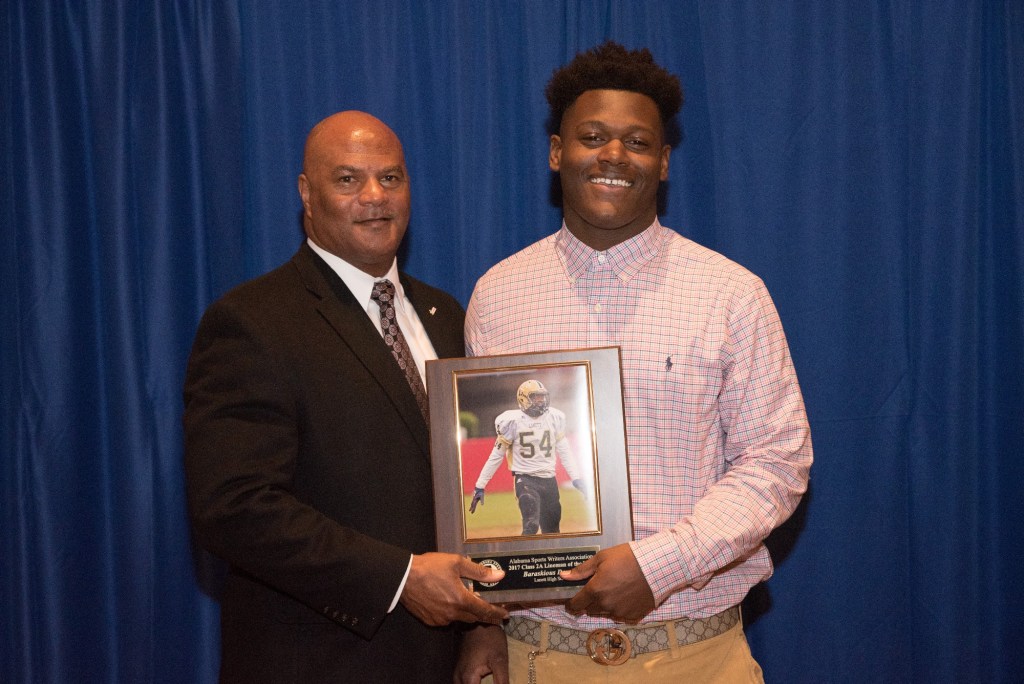 Lanett High School senior Baraskious Dowdell was named the Class 2A Lineman of the Year on Tuesday at the Alabama Sports Writers Association Player of the Year Luncheon in Montgomery. He is the first Panther to win a state player of the year award for football in head coach Clifford Story’s nine-year tenure. (Photo by Keith McCoy)

But his dress was merely a facade.

As the finalists for Class 2A Lineman of the Year were announced at the Alabama Sports Writers Association Player of the Year Luncheon, the Lanett High School senior shook with nervousness.

After a few moments of anticipation, Dowdell’s name rang through the ballroom at the Renaissance Hotel in Montgomery. A smile flashed across his face upon learning that he was selected for the prestigious award.

“I prayed on it, and it came through for me,” said Dowdell, still beaming after the conclusion of the luncheon. “I really thank God for that moment.”

Dowdell delivered a brief speech after accepting his award, and he used the platform to thank God, his coaches, his teammates, his mother and the Lanett fans.

“Baraskious put the time in in the offseason to put himself in this position,” Story said. “He told us all along that he was going to come back bigger, faster, stronger, and he made that commitment.”

In the fall, Dowdell helped anchor a Lanett defense that allowed fewer than 13 points per game en route to an undefeated season and the 2A state title. Playing at defensive end and nose tackle, he logged 110 total tackles — 21 for loss — 14 sacks, four forced fumbles and three fumble recoveries.

Those prolific numbers set him apart from Horseshoe Bend linebacker Parker Branch and Leroy offensive lineman John Karr, who also were finalists for the award.

“I’m happy that he had the opportunity to win this award,” Story said. “It means a lot for Lanett High School and our athletic program.”

Dowdell traveled to Montgomery with senior teammate Ty Truitt, who was a 2A Back of the Year finalist. He scored 33 touchdowns and tallied more than 3,000 yards of total offense in the fall while lining up at wide receiver, running back and returner.

But the numbers weren’t enough to beat out St. Luke’s Jermaine Brown, who captured the honor.

“It feels good to get to this point,” Truitt said. “I had a good year.”

Nevertheless, Tuesday proved fruitful for Truitt. Prior to the luncheon, he announced on Twitter his commitment to play football next year at Highland Community College in Kansas.

“He’s got a very bright future in this game, and he’s just going to continue to stay motivated and push himself to be the best he can be,” Story said.

Truitt plans to formalize his decision on National Signing Day, Feb. 7. Dowdell does too, though he has yet to choose a destination.

Whichever school he selects will secure the 2017 2A Lineman of the Year.

“Wherever I go, you’re still going to hear more about me,” he said. “That’s all I’m going to say.”