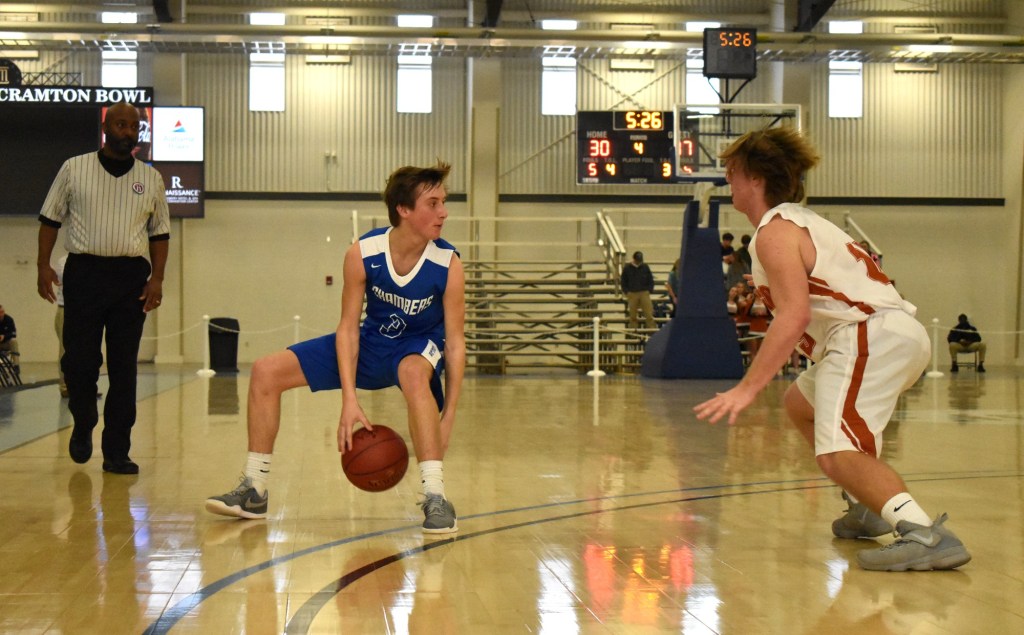 Chambers Academy guard Colton Hand (3) dribbles in the fourth quarter of his team's AISA Class A state quarterfinal game against Marengo Academy on Tuesday at the Montgomery Multiplex. Hand contributed eight points in the Rebels' 47-32 victory.

The Chambers Academy boys basketball team (6-14) did both in its 47-32 Tuesday victory over Marengo Academy at the Montgomery Multiplex. The Rebels’ triumph in the AISA Class A state quarterfinal clinched their spot in the final four.

Last year, they didn’t make it to state.

“We kind of set the tone with our defense,” Rebels head coach Jason Allen said. “I thought we did a phenomenal job of staying between them and the rim, did a great job of our screen-out responsibilities and limited them to one shot per possession for the most part. I thought that was the difference in the game.”

The Chambers Academy boys scored 18 points in the first quarter to take initial control. They added nine more before halftime and led 36-24 at the end of three quarters.

Freshman Payton Allen knocked down a pull-up jumper to provide his team a 12-point cushion entering the final period.

That’s when the Rebels iced the game with accurate free throw shooting. The team went 7-of-7 from the charity stripe down the stretch.

“This time of year,  rebounding and free throws win ball games for you,” Jason Allen said. ”Our guys have gotten consistently better with that all year. I’m extremely proud of them.”

Chambers Academy, which entered the state tournament as the No. 3 seed from Region 1, has won three of its past four games. The team will face top-seeded Evangel Christian Academy in the state semifinal on Friday at 7:30 p.m. (CST).

The Rebels already have played Evangel on three occasions this season, and they have lost each time.

But Jason Allen won’t let that discourage his team heading into its biggest tilt to date.

“We’re excited to be in the final four,” he said. “We know that anything can happen this time of year.”

The Lady Rebels (9-13) did almost everything they needed to capture a victory.

“I think we need to score 40 points to win a varsity girls game,” Fuller said, “and we came up a little short there.”

Chambers Academy suffered a 36-34 defeat to Southern Academy in the AISA Class A state quarterfinal. The loss ended the Lady Rebels’ season.

“I thought we played great,” Fuller said. “We stuck to our game plan; it worked. We shut down their best player, who only ended up scoring 15, and she averages 20 per game.”

Fuller’s squad never trailed by more than five points in a back-and-forth affair. But it couldn’t pull away, either.

The Lady Rebels weren’t able to sink the long-range shots needed to compensate for the loss in production.

Shelly Keebler finished with a team-high 14 points. Lizzie Keebler added eight, and Tate Reese had seven. All three, along with Stephens, will return next season.

“We said our goal from the beginning of the year was to make it to the elite eight, and we did that,” Fuller said. “We won our area, so I think we fared well.”